Venat is the secondary antagonist of Final Fantasy XII. It is a member of the race known as Occuria. While its motives are understandable, and even commendable, Venat is considered one of the game's main antagonists.

It was voiced by Anita Carey.

Venat is an Occurian that has forsaken the ways of the Occurian race. Unlike the other Occuria, Venat believes the inhabitants of Ivalice should have full control over their own destiny rather than following a plan set forth by the powerful Occuria. Venat represents chaos to their order and it works through humes and other races to achieve its goals. The team first see Venat controlling Fran's sister Mrjn in the Henne Mines. Later, it is seen accompanying Judge Bergan at Mt. Bur-Omisace.

Venat is also often seen accompanying Dr.Cid, having discussions with him about mankind and their right to have control over their own history. However, once Cid is killed at the Pharos at Ridoana, it begins to accompany Vayne Solidor on the Sky Fortress Bahamut.

How Venat met Cid or how long it objected to the Occuria's ways of controlling lesser beings is never discovered. All the player gets to know is that they met six years ago, while Cid was conducting research at the Ancient City of Giruvegan. After they met, Venat presented Dr. Cid with a plan to create manufactured nethicite, nethicite that can counteract diffracted nethicite and other magical powers.

Venat's plan to destroy the Sun-Cryst succeeds, but perhaps not as it had planned, when Reddas destroys it with the Sword of Kings.

While the Occuria are immortal, or at least they claim to be, Venat, with its intent fulfilled, gives up its own life and dissolves in wisps of energy that enter Vayne, giving him great power. Using Venat's powers, Vayne fuses pieces of the Bahamut onto him to create dragon-like armor around his body, becoming the being known as The Undying.

However, this power is not enough, and the team is able to defeat Vayne, who dies in an explosion of Mist. Venat seems to have foreseen this, claiming that it and Vayne would walk the path of death together. 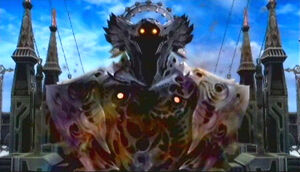 Retrieved from "https://villains.fandom.com/wiki/Venat?oldid=3615097"
Community content is available under CC-BY-SA unless otherwise noted.