Vendetta, also known as Miss Winston, was Derek Powers secretary and confidante. Miss Winston has minor appearances in the Batman Beyond episodes "Black Out", "Meltdown", and "Ascension". She is also the main antagonist in the comic Vendetta Strikes Back!. Miss Winston was one of the few people who was aware of Power's actual condition and helped him keep up the charade. Powers sent her to pick up Paxton from Verdeza. After Paxton successfully exposed his father's secret, Miss Winston remained loyal to him until he presumably died after sinking with the submarine (although his body wasn't found). She was voiced by Mari Devon and Tress MacNeille.

Miss Winston appears in this episode after being sent by Derek Powers to pick up his son, Paxton Powers, from Verdeza (where a branch of Wayne-Powers operates) and bring Paxton to him. After Derek Powers is exposed as the supervillain Blight, Miss Winston is the only one still loyal to him and gets him to hide in an abandoned nuclear submarine. Batman follows her bringing a sandwich to him where Batman figures out that the submarine's background radioactivity hides Blight's from radiation searches. After that scene she is not seen in the rest of the series.

Miss Winston returns in the Batman Beyond #8 comic, now known as the vigilante Vendetta. She makes her first appearance in Gotham after thrashing a Wayne-Powers shipment. The shipment was carrying cases of a thin unstable binary power cell battery. The battery is made of two inert gases and if the battery is cracked, the gases will combine and will create a toxin that is deadly to anyone that inhales it. Vendetta breaks one of these batteries as a demonstration to the driver of the shipment and as she inhales the toxin, it poses no effect on her.

The next day, Bruce demands to know why Paxton Powers is still shipping the batteries after board's majority vote decided to have the batteries' production discontinued. Paxton tries to reassure Bruce that he is abiding by the board's vote and he is having the batteries shipped out by Paxton Powers Delivery Express to Peace Ex Machina Inc, a rival company that is interested in the batteries. Bruce argues even further with Paxton because he is allowing potentially dangerous batteries to be sold to a company that will sell the battery to consumers that could become potential victims and this will lead to liability issues for Wayne-Powers. Paxton pretends to agree with Bruce by saying he will put an end to the commissions to transport the batteries to Peace Ex Machina Inc.

After Bruce leaves, Miss Winston, who overheard the conversation, tries to consult Paxton that if anyone discovers his hidden connection to Peace Ex Machina Inc then Wayne-Powers will be held liable. She continues by stating that Paxton's father Derek, would have never done something so stupid and Paxton interrupts her by warning Ms. Winston that she should tread carefully the next time she questions his business transactions. Meanwhile, Bruce tells Terry to head to one of Derek Powers' subsidiary companies that handles manufacturing where Paxton might be handling the batteries' transport.

Terry scopes out a manufacturing warehouse where a lot of activity is happening until Miss Winston arrives on the scene. She presents Jamal, the manager of the warehouse, a forged document from Paxton stating the immediate shut down of all production at this facility. The manager orders his hired help to take the rest of the night off and detains Ms. Winston with Paxton's security. Jamal realized the document was a fake and he received a call from Powers that if Miss Winston tries to interfere in the production of the batteries then have her taken out.

Miss Winston escapes the security staff as soon as Terry busts in as Batman. Soon after, Vendetta makes it to the scene and starts tearing the warehouse apart. Terry tries to restrain her with words but Vendetta is blood drunk with rage so she tosses Terry out of the burning warehouse and she vanishes before Terry can apprehend her. Ms. Winston returns to her office where she speaks to a plaque that has Derek Powers' name inscribed. She reveals that her exposure to Blight for a long period of time, has given her radioactive abilities but nothing fatal.

She promises to the memory of Derek Powers that she will destroy Paxton's operations. Paxton learned of Miss Winston's interference at the warehouse so he orders his bodyguard Dominic to shoot her. Paxton and his bodyguard leave Winston's body on the outskirts of Gotham. Winston transforms into Vendetta and attacks Paxton at another manufacturing warehouse. Terry protects Paxton from Vendetta as Vendetta tears the warehouse apart. Bruce tells Terry by via comm link, to get Paxton out of there even though Terry wants to save Vendetta.

Terry escapes with Paxton as Vendetta professes her love for Derek Powers and claims that she caused all of this destruction for him even though he never showed any affection towards her when he was alive. Vendetta breaks a battery and the inert gases combine with flammable gases which causes a huge explosion. The next day in Paxton's office, Paxton's insurance provider for Wayne-Powers informs Paxton that the damages done to subsidiaries/ warehouses were not covered because their connection to Wayne-Powers Conglomerate was severed before the damage was inflicted. 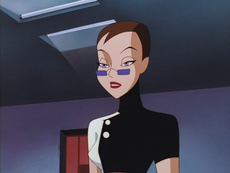 Miss Winston
Add a photo to this gallery 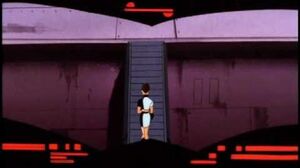 Blight eating a sandwich
Add a photo to this gallery
Retrieved from "https://villains.fandom.com/wiki/Vendetta_(Batman_Beyond)?oldid=2464044"
Community content is available under CC-BY-SA unless otherwise noted.