One Horned Head (mockingly, by Eric and the other heroes)

Necromancy
Evocation spells
Shapeshifting
Command over an horde of orcs

Get the magical artifacts to destroy the Dungeon Master and Tiamat (failed).

Venger is the main antagonist of the Dungeons & Dragons cartoon.

He is a very powerful sorcerer/archmagi, knowing a variety of spells both necromantic and evocation. He antagonizes both the children and the Dungeon Master on the majority of the episodes, forcing them to fight him and his forces as well as helping the villagers terrorized by him, which often sidetracks them from their main objective of finding a way to return home.

He was voiced by Peter Cullen, who would later play Optimus Prime in much of the Transformers franchise, and Captain Nathaniel Flint in Disney's Treasure Planet.

The Venger is very treacherous and authoritarian. When he gives an order, he expects it to be carried out, never tolerating failures. He also never gets tired of threatening everybody, especially the heroes and the Dungeon Master, making him especially evil given that the heroes are children ranging from 8 to 15 years old.

It should come to no surprise however, as Venger has killed countless heroes of varying ages for over 1000 years.

Venger stands at 7.05 feet (2.14 m) tall, towering over the rest of the cast, with the exception of large creatures and entities such as Tiamat or his former master.

He is presumably humanoid in appearance, having most of his body kept unseen beneath the blood red and dry blue robes he wears. His most characteristic figures are his wings (which he only utilizes along with Night-Mare and mostly keeps them folded like a cape) and the single horn on his head. His skin is pale white and he possesses large and sharp fangs to fit with the rest of his fairly demonic appearance.

The man known only as Venger is a sorcerer/archmagi who terrorizes the realm where the show takes place. His sole purpose in the series was to defeat the Dungeon Master and claim the realm as his own.

Though he is described as a force of pure evil, Venger was once a heroic person. He was once human, at some point being transformed into a Half-fiend. The force that turned him evil was never stated specifically, though it is said that he got his dark powers from the Nameless One. The Nameless One is a dark entity which was banished prior to the youngsters arrival. He is the Dungeon Master's son and was also his student, leaving Dungeon Master to consider Venger "his greatest mistake". His twin sister is Karina and all 3 members of the family are 1,000 years old at least.

When the six youngsters arrived at the Realm, the Dungeon Master gave each one a magical artifact, the same artifacts Venger was seeking in order to defeat the dragon-goddess Tiamat and the Dungeon Master himself. Venger travels mounted in a Dark Horse (a Nightmare) who flies and breathes fire. He also has a henchman known as the Shadow Demon, as well as an army of orcs. He has a lot of castles throughout the Realm, threatening all villages in the Realm with his powers. Venger has also known to have killed many heroes his father has sent after him in the past, making him a threat to the lives of the 6 teenagers brought to the realm to fight him and the only ones to thwart his evil plans.

While a official final episode was never produced, the show's script editor Michael Reaves did wrote an script for it, which he later posted on his website. The script was included on the first DVD compilation of the series as a radio play and later adapted into a webcomic in Brazilian Portuguese by Reinaldo Rocha. The episode was titled "Requiem".

As the children are running away from Tiamat, the dragon goddess and mother of all evil dragons, they call for the Dungeon Master's help, who shows up only to tell them they should be able to get out of the messes they created by themselves before leaving. After they escape from Tiamat, they start arguing between themselves as for why the Dungeon Master abandoned them, at which point the Venger appears before them. Taking advantage of their confusion, he tells them he can grant their wish and send them back home if they could do a quest for him: to go to the Demon's Realm, where they would find a empty tomb with a hidden key. If they disposed of said key into the abyss they would be able to go home.

After Venger leaves, they kids get split up about his promise, with one group led by Eric deciding to go after the key, and the other group led by Hank deciding to stop them. The two groups make their way to the Demon's Realm, battling each other on the way, before arriving on the place. As they start arguing again, the floor starts crumbling, revealing a slime monster which pursues them as they climb up the stairs which leads them to a room with a sarcophagus and a vault. As the kids look at it, they realize the carving on the sarcophagus looks like the Venger, but missing his demonic features. Upon opening it, they find the Key inside. Eric picks it up but is stopped by Hank. The slime monster catches up to them forcing them to fight it again. The Venger once again materializes, telling Eric to throw the key into the abyss, but he decides to go for the vault instead. Angered, Venger attempts to attack Eric, but is trapped by the slime monster, allowing Eric to fit the key on the vault's keyhole. This causes a massive burst of light which disintegrates the slime monster and engulfs Venger, who screams in agony.

As the light dissipates, the kids come back to their senses and watch as the Venger, still wrapped out by the light, is transformed back into a human. The Dungeon Master finally appears before them, revealing that Venger was his son and that he'd been guiding them this whole time so they could return him to his former self. Venger tells them that he had chosen to follow the Nameless One, who corrupted his soul, and that all goodness he once possessed had been imprisoned on that vault. With Venger redeemed, the Dungeon Master opens up a portal for the kids to their world, telling them it was now their choice to either return home or to stay in the Realm.

With the exception of his master, Venger is the most powerful entity in the series, possessing power that dwarfs that of even the mighty Dungeon Master, able to cast all manner of spells. Having lived for over 1000 years, his magical prowess has bested numerous heroes that have entered the realm in order to defeat them, the only ones being Hank, Eric, Diana, Presto, Sheila and Bobby, the main protagonists of the series.

Aside from his longevity, Venger also appears to have some degree of immortality, as his body has been shown to be destroyed a few times yet he always shows up again unscathed. The heroes' weapons do have the power to kill him, however.

In spite of having wings, Venger prefers to teleport over large distances and only uses them when mounted atop his steed Night-Mare. 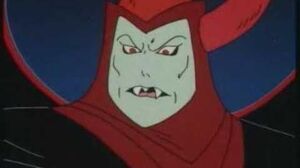 The Best of Venger 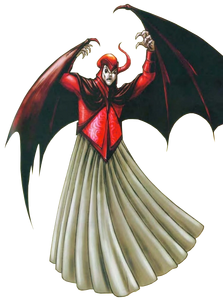 Venger art for the handbook 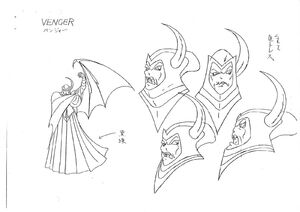 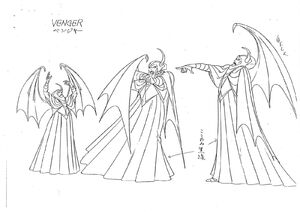 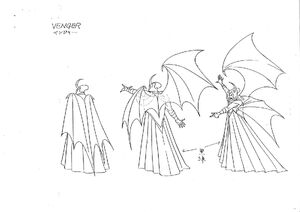 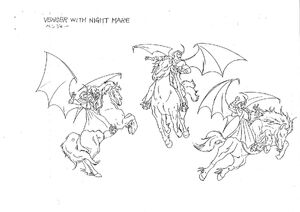 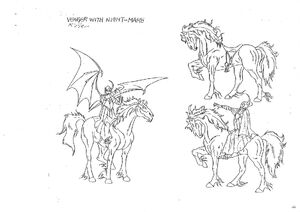 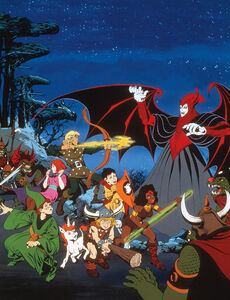 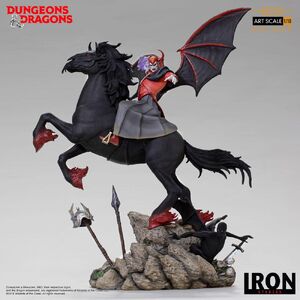 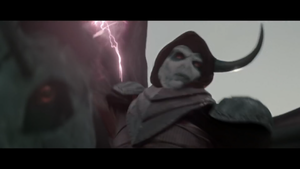