Control over most technology

Army of Attack Bots and Grinders

Wipe out humanity and conquer the Earth.

The Venjix Network began when Doctor K, a captive of the government-run Alphabet Soup research facility, attempted to escape by releasing a computer virus named Venjix into the facility's system. The staff of Alphabet Soup soon found out what she was doing and incapacitated her, preventing her from installing firewalls to keep the virus from entering the world. Thus, the Venjix Virus quickly spread across the globe, taking control of all communication and defense systems. Venjix used these resources to build armies of robotic soldiers called Grinders, which Venjix used to assert his control over the world and wipe out most of humanity. To lead his army, Venjix constructed two robotic generals named General Crunch and General Shifter.

The surviving humans fled the domed city of Corinth, which was not under Venjix's control. Venjix and his Generals thus began focusing their efforts on attacking the city to destory what remains of humanity and finally achieve complete world domination. 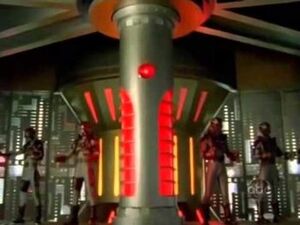 Retrieved from "https://villains.fandom.com/wiki/Venjix_Computer_Network?oldid=3343845"
Community content is available under CC-BY-SA unless otherwise noted.