How to Train Your Dragon franchise

The Venomous Vorpent is the overarching antagonist of How to Cheat a Dragon's Curse, the fourth book in the How to Train Your Dragon series. It is a tiny Bog Dragon utilised by Alvin the Treacherous to try and kill his arch-nemesis, Hiccup Horrendous Haddock the Third.

Despite being the main villain of book four, the Vorpent's only story role is actually in the previous book, How to Speak Dragonese. It is slipped into Hiccup's self-authored book How to Speak Dragonese by Alvin to kill Hiccup and thus get revenge on him for foiling his evil plan. At the end of the book, it stings one of the main characters without their noticing due to the anaesthetic it administers.

How to Cheat a Dragon's Curse

Hiccup's friend Fishlegs is taken ill, and it is decided that he had Vorpentitis (implicitly from being stung by the Vorpent at the end of the previous book). The tribe elders tell Hiccup that the only cure was the Vegetable-That-Must-Not-Be-Named (potato), kicking off the main plot where Hiccup tries to find the potato and bring it back to Berk.

Throughout the book, there are messages from the Vorpent directly to the reader, laughing about how Hiccup's quest will fail because "NOBODY can cheat the curse of the Venomous Vorpent".

At the end of the book, it transpires that Fishlegs simply has flu and Hiccup was in fact stung. Due to Hiccup failing to bring back the potato, it having been eaten by a dragon called the Doomfang that was previously stung by the Vorpent, it appears inevitable that Hiccup will die. However, Fishlegs saves him by shooting him in the foot with an arrow that had been soaked in the juices of the potato. This prompts a final message from the Vorpent lamenting its failure. However, it promises that it will "find another victim".

The epilogue, supposedly written by Hiccup as an old man, relates that as an adult he discovered a potato growing in his garden. He then began growing more, as well as distributing them to people around the Barbaric Archipelago and showing others how to grow them, until eventually everyone in the Archipelago is immune to the Vorpent's venom. 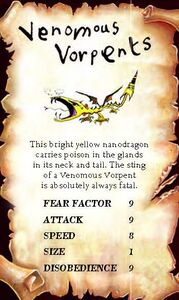 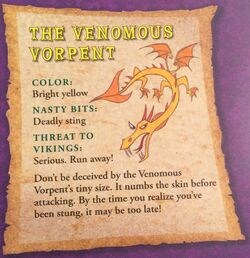 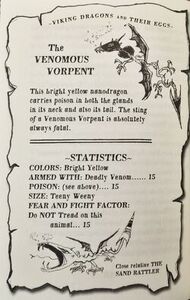 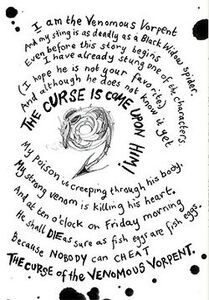 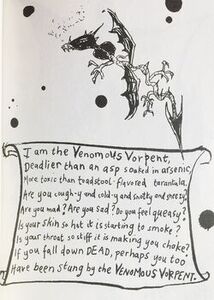