Villains Wiki
Register
Don't have an account?
Sign In
Advertisement
in: Mature, Toaru Majutsu no Index Villains, Magic,
and 45 more

Member of the Roman Orthodox Church

Killing the enemies of God and the Church.

Lead the Roman Orthodoxes to Ultimate Salvation
Acquire Godhood and become the "One Above God" (formerly).
Kill Touma Kamijou (formerly).
Stop Fiamma of the Right from acquiring Godhood and distorting the world (succeeded).

Vento of the Front is a major antagonist of the A Certain Magical Index series, serving as the secondary antagonist of the Academy City Invasion Arc and a major antagonist in the God's Right Seat Arc. She's a member of God's Right Seat and is the only known female member of the organization. She fights on behalf of the Roman Orthodox Church and kills the enemies of both the Roman Church and God. She is eventually betrayed by her former superior, Fiamma of the Right, and must try to stop him from acquiring Godhood alongside Acqua of the Back.

She is voiced by Akiko Hiramatsu in the Japanese version of the anime and Kara Edwards in the English version.

Vento of the Front is usually seen in all-yellow with small shades of brown. She's wears a yellow kirtle with cross symbol over a brown collared undershirt reaching up to cover her hands. She has removable sleeves from her wrists to her upper arms and has a giant yellow headpiece to top it all off. She's also covered in piercings and has silver corsses as earings and even has a silver cross on her tongue but never interferes with her when talking. She also has a large barbed wire chain across her waist that is connected to her wind hammer.

Vento of the Front has a very violent, spiteful and war-like personality. She's dedicated to the Roman Catholic Church and believes in magic and magic only. Vento has a fanatical hatred of science from a past experience and as a result she views magic to be more supreme like all other magic-side antagonists in the show.

Her personality allows her to activate her Divine Punishment Ability. When it comes to authority, Vento cares very little as she is very assertive. She will often interrupt people for things like corrections like she did when making the Pope at the time of her appearance sign a document which would label Touma as an enemy of god and would give her the authority to kill him and talked down very sarcastically when she was addressing Aleister Crowley during her invasion of Academy City.

Her most primitive personality trait is her hatred of science. Vento hates science to the extreme and views magic to be superior because of her brother's death used to help her heal after an injury in the past. She blames science and has vowed to overthrow it and has a very violent grudge against the Science Side. She's called out on this by Touma, who makes her realise that she actually has no reason to hate Science and that her brother's death was nothing more than an accident.

She appears to believe that Roman Catholicism is the superior form of Christianity as she views all Non-Catholics (such as Protestants) as "heathen monkeys".

Prior the series, Vento was with her younger brother at an amusement park back when she was a child. She and her brother were on a ride when all of sudden it derailed and the two of them became heavily injured. They both had a very rare blood-type and supplies and donors were short and doctors couldn't save them both. Her brother ended up sacrificing himself so his sister could live and out of rage, Vento blamed science and became a magician. Because of her hatred of science and magic supremacist beliefs, she had became a member of God's Right Seat at some point in time and was dawned the title of Vento of the Front.

She first appears in the La Regina del Mare Adriatico Arc more towards the end of the story arc. She appears at St. Peter's Basilica with the Pope after the fleet's destruction and has a document in her hands. The document calls for Touma Kamijou to be labeled as an enemy of both God and the Roman Catholic Church and thus, would allow for her to intervene and kill him with his approval. The Pope regrettably agrees to this under pressure and signs it.

Vento of the Front plays a major role in the Academy City Invasion Arc where she serves as one of the primary antagonists next to that of Amata Kihara. She breaks into the city through one of the entry gates and uses her spells and powers to use it on a nearby Anti-Skill Patrol and knocks out anyone in its radius and contacts Aleister Crowley and warns him that she'll destroy Academy City and will take him down with it. While she's wandering throughout the city, Kihara attacks her with a rocket launcher but manages to survive and allowing Index and Accelerator a chance to escape. She turns around to him and tells of how if he wants to fight, just fight, but Kihara pulls out in a minivan, leaving a small group of four Hound Dog mercenaries to deal with her in which they are all beaten unsurprisingly.

She continues to wander around until she finds out where Touma is. She finds him inside a small local restaurant and he's been pinned down by a small group of Hound Dogs. She knocks out the mercenaries and enters the restaurant stating her name and the intention of her appearance. She then begins launching attacks at Touma which he manages to deflect but is unable to beat her early on. Vento eventually has Touma cornered but then, she gets affected by the Artificial Heaven activated by Aleister Crowley where her body becomes numb and she begins coughing up blood. She then withdrew from the fight and decided to wander around Academy City in search of where the signal was comming from and she finally made it to the center where she sawe Hyouka Kazakiri being used to activate the Artificial Heaven and she decides to kill her until Touma ends up stopping her. The two then engage in battle once more where Touma is cornered at first but then regains his ground half-way through. During the middle of the fight, Vento is asked why she has such a deep and fanatical hatred of Science by Touma and she answers why by telling him how she was at an amusment park with her younger brother back when she was young and they were injured in an accident on a ride despite it being declared safe by scientists. The hospital was short on the blood-type supply that they had which was rare and so, her brother sacrificed himself sp Vento could live and she hated science since than. Touma then says how Vento's brother made a noble sacrifice for her and that she shouldn't bare such a vendetta towards Science but Vento rejects it and charges at Touma only to have him punch her and have her lay down defeated at the hands of Imagine Breaker. She is picked up shortly after the fight by Acqua of the Back and they both flee Academy City after laying much of it to waste.

Acqua of the Back Arc

Vento of the Front appears at the end of the arc where she comments on the destruction left behind by Fiamma of the Right after his brief fight with Pope Matthai Reese. Realizing the burnt that Pope Reese had taken to prevent civilian casualties, Vento calls back to the conversation that the two had after the failure of the Queen of the Adriatic Sea asking him if Reese still hates being voted by the people after saving the lost sheep. The Pope then tells Vento to go to England where Fiamma is heading to but she declines and notices the crowd of people looking at her. She then comments on how she'd be dead had she not have her original weapon and then leaves while medical personal tend to Reese and his wounds. 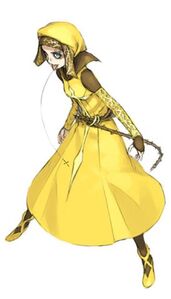 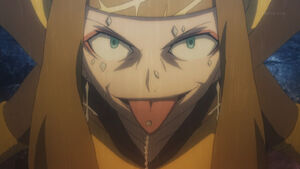 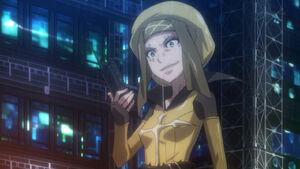 Vento arrogantly boasting to Aliester Crowley over a walkie talkie 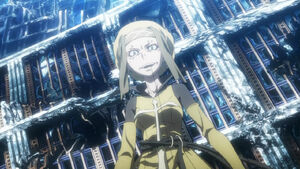 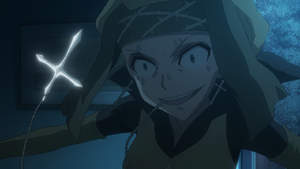 Vento of the Front attacking Touma 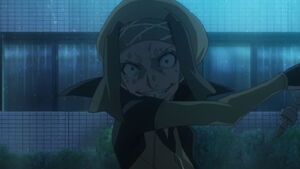 Vento bursting into a restaurant 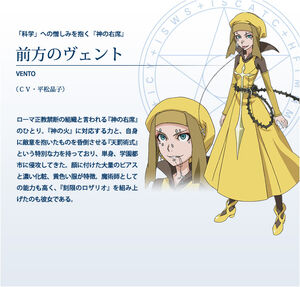 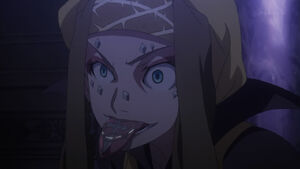