Dissociative Mobster
The Ventriloquist and Scarface are a pair of villains in Batman comics, games and animations.

Peyton Riley is a former fiancée of Hush and the daughter of a mob boss. She becomes the new Ventriloquist after the death of the original (Arnold Wesker), called Sugar by the dummy Scarface. She surfaces in the pages of Detective Comics and was hinted to be an old character long thought dead (as part of her face is shown to be scarred). She is a more compatible partner than Wesker, since Scarface no longer substitutes "b" with "g" and is much more compliant with Scarface's brutal methods. She and Scarface seem to have a relationship similar to the Joker and Harley Quinn, as she seems to believe that the dummy truly loves her. When nearly captured by Batman and Harley (who dislikes Sugar out of loyalty to her predecessor), she has Scarface say, "Save yourself."

In an attempt to unite the Irish and Italian mobs, Peyton's father married her off to his enemy's heir, Johnny Sabatino. Peyton wound up being trapped in an abusive and loveless marriage with Sabatino, who was also inept mobster and failed to unite the gangs.

When Sabatino was caught stealing money from Scarface and Arnold Wesker, he and Peyton were about to be executed by Rhino until Peyton began pleading with Scarface. The Ventriloquist takes a liking to her and decides to let the two of them live, as long as Sabatino gives him a 30% cut of all his future profits. Sabatino becomes much more successful, and he eventually decides to have Peyton and her father killed. Sean Riley is assassinated in a church, while Peyton is brought to an old tenement to be taken out by Sabatino and his thugs. Sabatino shoots her in the head, while his thugs shoot her several more times and leave her to die. Shortly afterward, Peyton hears two more shots coming from the next room, where it turns out Wesker and Scarface have been murdered by the assassin Tally Man, on orders from the Great White Shark. After dragging herself into the room, Peyton finds Scarface has begun "talking" to her (like the original Ventriloquist, she is in fact talking to herself). She pulls herself out of the building and to the hospital, taking Scarface with her, and eventually makes a full recovery. She repairs Scarface, and decides to take on the identity of the Ventriloquist.

Scarface and Peyton plan to kill Sabatino by throwing him over the side of his own yacht (ironically a wedding present from Sean Riley). In a conversation with captured Wayne, Riley seems to shake off the Scarface personality and speaks to Wayne as her true self. Through this conversation she reveals that she knew Wayne, having been engaged to one of his friends: Tommy Elliot, the man who would become Hush, and her name of Peyton Riley is revealed as well, as Bruce recognizes her. The Scarface personality reasserts dominance over Peyton and hits her, accusing her of flirting with Wayne. In their hideout, Peyton goes on to talk of the rest of her origin, including her father and how Sabatino had him killed and tried to have her killed. Zatanna rescues Wayne and, as Batman, he rescues Sabatino while Zatanna tries to talk Peyton down, trying to convince her that she no longer needs to seek vengeance. Before she can have any effect, Moose (sister of Rhino, one of the original Scarface's former thugs) hits her with an oar. While Batman protects Zatanna from Moose, Peyton makes another attempt to throw Sabatino over the side, but gets too close, and he begins to strangle her with his own bonds. Scarface quietly says "Jump, Sugar" and Peyton desperately sends them both over the side.

Peyton later resurfaces during the Gotham Underground story arc, when she teams up with Lock-Up, Firefly and Killer Moth under the orders of Scarface. The group learns from the Scarecrow that the Penguin is working for the Suicide Squad, who are rounding up villains to be sent off-world to the prison planet. However, upon learning the information, the group shun Scarecrow and move to an assault on the Penguin at the Iceberg Lounge, but are defeated by the Penguin's super-powered forces. Upon retreating, they once again encounter Scarecrow, who leads them to an alley to escape. However it is actually a betrayal and the group are ambushed by Tobias Whale's men, who are out to cleanse Gotham of costumed villains so the Mafia can once again take control of the city. Peyton ducks for cover as Whale's men begin to shoot while Scarface attempts to fight back and is gunned down. Peyton cries over the broken dummy, while Whale comforts her. She tells him that anything she did wasn't her fault since she is under Scarface's influence, to which Whale sardonically smiles and asks one of his men to escort her away. When she is out of earshot, however, Whale tells his men that "she is to be hurt, understand?".

Scarface and Peyton plan to throw Sabatino over the side of his own yacht. Zatanna rescues Bruce Wayne. As Batman, he proceeds to rescue Sabatino while Zatanna tries to talk down Peyton, explaining that dolls and puppets have powerful magic. Before she can have any effect, Moose hits her with an oar. While Batman protects Zatanna from Moose, Peyton makes another attempt to throw Sabatino over the side, but gets too close, and he begins to strangle her with his own bonds. Scarface quietly says, "Jump, Sugar", and Peyton sends them both over the side. Before they hit the water, Scarface says "G'bye, kiddo. I loved y..." 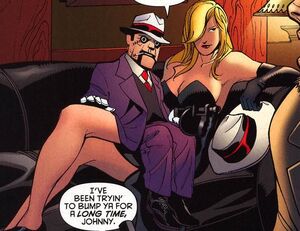 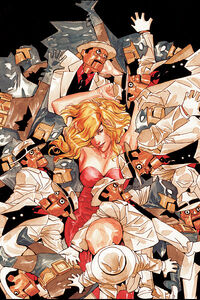 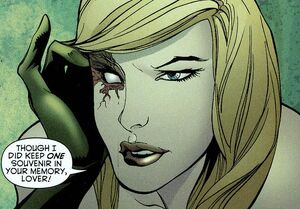 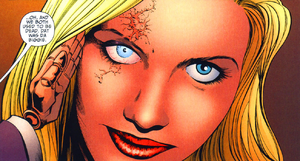 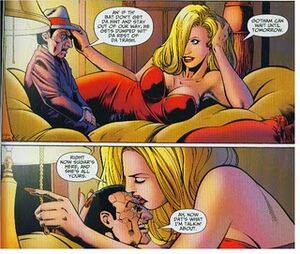 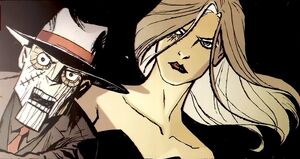