Venus Lovelace is the Trinity's goddess of space. She is merged with the otherworldly parasite Abaddon.

Her appearance is deceiving as her full form is beyond the threshold of human comprehension. What see is only but a sliver of her true form that has been able to slip into our reality. Why Venus has come to plane of existence is simply out of boredom while waiting for Mother's (the head of the Trinity) plan to unfold. This action goes against Mother's plan, but perhaps that's part of the plan after all.

Venus, worshiped in the Canopy Kingdom as one of the Divine Trinity, flaunts her rather suggestive High Priestess outfit in one of the stained glass windows of the Grand Cathedral stage. Her powers to bend and distort space compliment her sister Aeon's control of time. Venus fights with her three Ab-baddon parasites, which emerge from the front and sides of her abdomen as she contorts and separates body in impossible ways. As a playable character this could give her a half sexy and half disturbing fighting style.

Venus appears along with her sister Aeon in Double's story mode.

Venus was revealed to be a potential DLC character among 31 other characters during the Skullgirls Indiegogo fund raising campaign. She was an early fan favorite, and had made it through the first round of voting, but simple sex appeal proved to be not enough amongst the Skullgirls community, and she was eliminated in the second voting round. 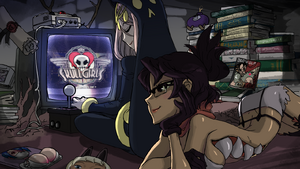 Venus watching Aeon playing Skullgirls in consoles.
Add a photo to this gallery

Retrieved from "https://villains.fandom.com/wiki/Venus_Lovelace?oldid=3467553"
Community content is available under CC-BY-SA unless otherwise noted.