Verdugo is a boss, one of the many results of advanced experiments with splicing DNA via Las Plagas, and a minor antagonist in the 2005 action video game Resident Evil 4.

Created through DNA splicing on insect DNA and that of human parasitized with a Plaga, Verdugos are B.O.W.s specifically engineered as Salazar's bodyguards, even though their original purpose is a mystery.

The exact number of created Verdugos is unknown, since Leon encounters only two of them during the game. It might be that we encountered the only existing ones, which is fortunate since their development was more costly than cheaper yet animalistic Novistadors.

Verdugo's first on-screen appearance is when Leon comes face to face with Ramon Salazar with latter introducing himself. Clad in ceremonial cloaks that more ornate than those of Los Iluminados cultists, they silently accompany their master, all while keeping an eye on the guests to ensure they don't do anything reckless. The two then left Leon and Ashley along with Ramon after the exchange.

The Verdugos later seen again, armed with metal spears while retrieving Ashley from Novistadors' grasp alongside their master. The creatures held the girl in spear-point by the time Leon catches up. Following Ramon's failure in disposing Leon via. a floor trap, one of them (the one with red robe) set out to hunt the agent after a comical yet heated argument between its master and Leon while another (black robed one) stayed behind. Tossing away its robe and weapon, the red robe Verdugo confronted Leon with its concealed true form. Initially attacking the agent while remained hidden, the beast eventually reveals itself and all-out, only to be defeated by combination of nitrogen spray and gunfire.

The black-robed Verdugo later seen with Ramon Salazar as the latter revealed to Leon that Ashley is currently underwent a ritual while gleefully considering to do the same on the agent. This Verdugo proved to be as dangerous as its fallen comrade, as it quickly removes the knife that pinned its master's palm onto the wall and tossed it back to Leon in retaliation. With Leon proved too troublesome to let around even with growing plaga in his body, Salazar and black-robed Verdugo merge with the Queen Plaga to destroy him once and for all. Despite their increased power, the gestalt beast ultimately destroyed by Salazar's death (since his human form acts as the monster's weak point), which also killed the Verdugo who merged with them as well.

Verdugos doen't displayed any personality traits other than being loyal bodyguards to Salazar, always looking out for anything that threaten his well being and defensive at all times. They also displayed near human-level intellect since human genes were used for its creation, able to wear robes over their terrifying form so they won't stand out whenever accompanying their master.

The black-robed Verdugo demonstrates us that even after severe mutations, it still fully retains it's intelligence, snatching you with it's vertical mouth full of fangs only when mutated Salazar orders it to.

The battle begins once you have realised that an elevator to the surface is out of power. From this point, Verdugo stays either above the ceiling or below the floor, occasionaly ambushing you with it's tail or claws, but only when you keep moving forward. After restoring the power and checking the closed shutter door, Verdugo jumps down from it's hiding spot, alerting you of it's presence with a loud scorpion-like hissing. It seems that the creature won't reveal itself until it's sure that you are trapped in a narrow space. This is when Verdugo's behaviour gets a lot more complicated. Most of the time, it quickly approaches you to pounce, whip you with the tail or knock you off (each of these attacks can be evaded via qte prompt). If the player is facing it and standing still, it will start slowly and confidentely walking towards him while flexing it's neck muscles. Sometimes, when player is agressive deals a decent amount of damage in a short span of time, it can hiss at him in frustration, jump onto the ceiling and proceed to leap from wall to wall, attacking the player without dissapearing from his sight. Apart from always trying to get closer to you, Verdugo can resort to fast and less damaging swings with it's left arm and keeping distance between you by doing a backwards salto. When Verdugo loses lots of health, qte sequences start to get longer and quicker. Another monster's notable feature is it's immense reflexes, which allows it to dodge and block bullets, grenades and rockets when it is attacked from the front. 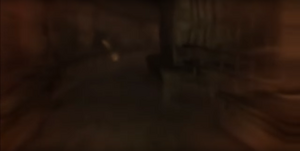 Verdugo is frozen, but is still able to move.

Verdugo bashing down the door.

Verdugo attacking from the ceiling with it's tail. 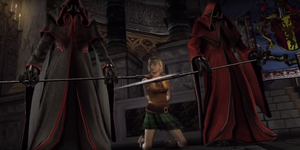 Salazar, Verdugo and the Queen Plaga. 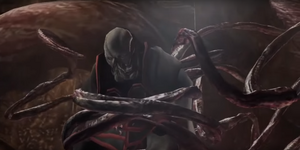 Verdugo fusing with the Queen Plaga.

Verdugo after fusing with the Queen Plaga. 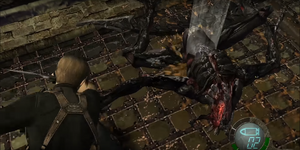 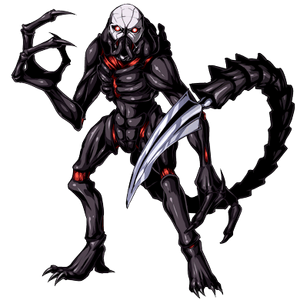