Head of the Aryan Brotherhood

Obtain as many members of the Aryan Brotherhood as possible.

Spread racism and anti-semitsm throughout Oz.

Vernon Schillinger is one of the main antagonists in the TV series Oz.

Schillinger is the leader of the Aryan Brotherhood in Oz penitentiary. He hates and occasionally kills Jews, Black men, and homosexuals (which is ironic since he also rapes male inmates).

Vernon Schillinger is also the main antagonist of Tobias Beecher's storyline. After being his sex slave for the whole first season, Beecher ends up fighting back, humiliating his rapist by defecating on his face. The rest of the series have them trying to hurt each other the most possible. After his son Andrew ends up in Oz, Vern seems to want to be a good father to him, but because Andrew is a drug addict, it is hard for Vern to be nice and caring for him. After Beecher participated in a conspiracy to have Andrew turn against Vern and die of an overdose, Vern seeks revenge against Beecher and pays his other son, Hank, to kidnap Beecher’s two children and eventually has his son killed. Once Vern realizes that Beecher had sent Hank to unite with his father, he decides to let go of Beecher’s daughter. Beecher, however, becomes even more vengeful and pays Italian inmate Chucky Pancamo to kill Hank as well. Schillinger eventually orders an inmate to murder Beecher’s father.

Schillinger does have, like all inmates, some moments of humanity. He loves his sons (to whom he transmitted his beliefs) and tries to support his stepdaughter, who gave birth to his grandchild. However, Schillinger is also one of the most cruel and dangerous criminals featured in Oz, and despite sometimes wishing to, never stops to make a hell out of Beecher and other inmates' lives.

Once he thinks that Chris Keller has betrayed him, he conspires with Keller to kill Beecher during a production of Macbeth, only to find out that he has been double-crossed by Keller when Vern is stabbed with a knife by Beecher that was suppose to be Vern’s weapon to kill Beecher.

As the 'Head of the Aryan Brotherhood', Schillinger is virulently racist, anti-Semitic and homophobic.

He is also very sadistic and abusive, especially towards Tobias Beecher, whom Schillinger becomes very vengeful towards when Beecher attacks him. The rest of the seasons are basically them trying to hurt each other and their relatives. 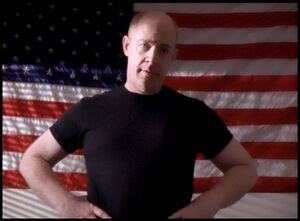 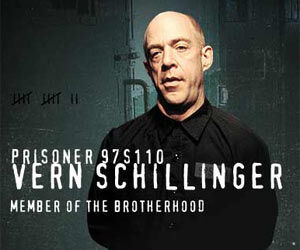 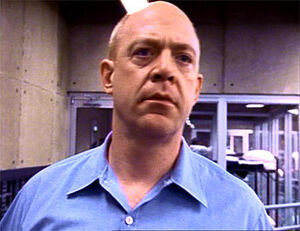