Hanging out with girls

Vernon Trent is the main antagonist of the film Hard to Kill.

He was portrayed by William Sadler, who also portrayed William Stuart in Die Hard 2.

Vernon Trent made a deal with an underworld mob boss to kill a senator and even told him "And you can take that to the bank!",but Mason Storm a policeman who spied the meeting recorded it.So Trent sends his best henchmen Jack Axel and Max Quentaro two dirty cops to kill Mason Storm and his family, to pass it off as corrupt cop by hiding drugs in his bedroom and to find the record of the meeting,however Storm and his son survive the assault but Storm falls into a coma and Kevin O Malley a Storm's colleague who are with some doctors the only ones to know Mason survival, pass him as dead as well as his son to avoid any attempts of murder and also keep the record in safety.

Years later after recovery and another Axel's attempt to kill him in the hospital, Mason sees a commercial of Vernon who said: "And you can take that to the bank!" Recognizing the voice, Mason now knows who he has to go after to get his revenge and even mocks Trent's phrase by saying "I'm gonna take you to the bank. To the blood bank!" Later on, Mason Storm gets his revenge on the 2 corrupt cops who tried to kill his son and murdered his wife.

Mason finally manages to confront Senator Trent, and holds him at gunpoint when the police storm the mansion. However, rather than arresting Mason, the police who have seen the record arrest Trent and take him away. 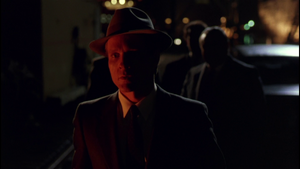 Trent at the meeting with the mob boss. 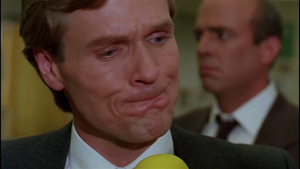 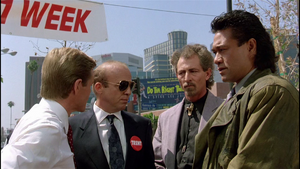 Trent talking to his henchmen Hulland, Axel and Quentero after Storm's hospital escape. 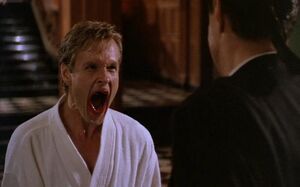 Trent screaming before Storm shoots him in the testicles with his shotgun. 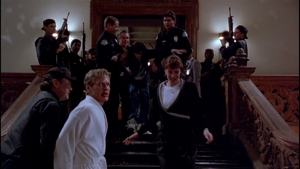 Trent's defeat.
Add a photo to this gallery
Retrieved from "https://villains.fandom.com/wiki/Vernon_Trent?oldid=4147762"
Community content is available under CC-BY-SA unless otherwise noted.