The Vers Empire is the main antagonist faction of the anime series ALDNOAH.ZERO. It is the de-facto and ruling government of Mars that also dominates the Moon and has access to advanced technology from a now extinct alien species. They're currently at war with United Earth in an attempt to regain lost territory.

Around the 1970s, Apollo 17 discovers the Hypergate on the Moon and began to colonize the Moon in the process. Eventually, the nearby planet of Mars was colonized in the process, and then the discovery of Aldnoah in the process. The Vers Empire was then established, and soon authority over the Aldnoah technology was proclaimed by the newly declared Emperor. The people of VERS quickly became nationalistic and declared themselves a separate race from humanity and quickly coined the term Martians. The Martians quickly resented old humanity back on Earth and referred to them as Terrans. Although the Vers Empire has advanced technology, they lack plentiful resources and culture and quickly went to war with Earth.

In 1999 the Vers Empire declared war on Earth for the planet's vast natural resources and culture starting the First Earth-Mars War. From 1999 until the early 21st Century, Earth and Mars waged war against each other and ended with a United Earth victory and the destruction of the Moon resulting in a ring of Moon ruins orbiting Earth. In 2014 the Princess of Mars Asseylum traveled to Earth on the intense of Diplomatic Peace when she was attack and allegedly killed. She actually survived, but the incident was used by the Martians to launch another war against Earth starting the Second Earth-Mars War and with 15 years of technological advancements, the Martians were better equipped and quickly decimated all counter-attacks allowing Martian Ground Forces to enter Earth's atmosphere and land on the planet's surface.

Until the intervention of Inaho who managed to find a weakness in the defense systems of their mechs and exploited it, Vers Imperial Forces successfully drove back the United Forces of Earth, as the UFE was left hopeless. This resulted in the formation of Mustang Platoon, as they would become a threat to the Vers Imperial Military,

After the war, Asseylum became Empress of Vers and was able to secure peace between Earth and Mars.

The Vers Empire is a Monarchy ran by the Royal Family. The Emperor is the official Head of State and has absolute authority over the country and the Princess appears as a possible diplomat. While the emperor has final authority on matters of state, the nobility seem to hold considerable influence within the empire.

The primary weapons of the Vers military the heavily armed, Aldnoah-powered Kataphrakts, mechs armed with both conventional weapons such as cannons and missiles, as well as more exotic armaments such as dimensional barriers, plasma blades, lasers, rocket fists with monomolecular armor, ballistic prediction software, Tesla coil-like electrical weapons, active camouflage, monofilament blades, and even weapons capable of manipulating gravity and entropy. With these weapons, Vers Katphrakts can wipe out entire armies by themselves, however, they all have weaknesses that can be exploited by a clever adversary.

Most Vers Kataphrakts have at least a vaguely humanoid, bipedal design, save for the quadruped Scandia, modeled after a centaur, the tripod Deucalion, and the "hover tank"-like Electris.

The Vers Empire also have Aldnoah-powered spacecraft, most notably the massive, heavily armed Landing Castles, as well as smaller air and space craft, such as Sky Carriers, Space Transports, and, most recently, the Stygis, an Aldnoah-powered space fighter. The Stygis was designed by Count Saazbaum as a mass-producible Aldnoah-powered war machine for use by commoner pilots in preparation for his coup and presumed introduction of a more egalitarian regime on Mars.

Apart for the Kataphrakts and spacecraft, the Vers have few, if any other combat vehicles, meaning the only other combat forces in the Vers Military are infantry armed with weapons similar to their Terran counterparts, including handguns, assault rifles, and handheld missile launchers. 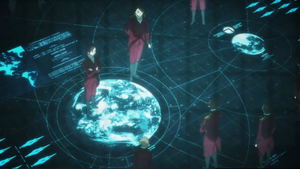 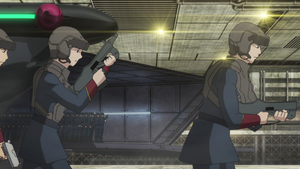 Soldiers of the Vers Empire. 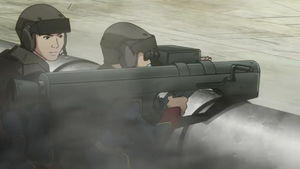 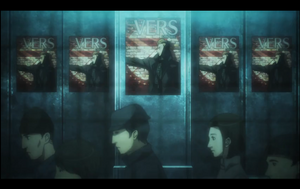 A propaganda poster for the Vers Empire.
Add a photo to this gallery
Retrieved from "https://villains.fandom.com/wiki/Vers_Empire?oldid=4289559"
Community content is available under CC-BY-SA unless otherwise noted.