Vetvix is a beautiful and powerful sorceress and the main antagonist of Garfield's Pet Force. The source of her evil powers are her golden yellow earrings and power crystal on her silver headband.

Vetvix's main source of minions is an animal-splicing machine that allows her to mix and match parts from other animals and create new creatures that are entirely under her control. She is also highly skilled with magic and genetics.

She is the opposite of Dr. Liz, so Emperor Jon has strong feelings for her. Near the end of the film, Garfield shoots Vetvix with the Moscram Ray Gun and Vetvix becomes a nice woman who is the perfect spouse for Emperor Jon and she apologizes to him, then they start their honeymoon after Emperor Jon immediately forgave her.

She was voiced by Vanessa Marshall.

On the planet Dorkon, Professor Wally shows Emperor his new invention, The Moscram ray gun, a device powered by the Klopman crystal that can scramble inanimate objects and organisms into new creatures under the user's control. But Emperor Jon is concerned about finding a wife to continue the royal bloodline. Soon a warship lands outside the palace. Emperor Jon sees Vetvix, and asks her if he can marry her. She agrees, but only because she wanted to steal the Moscram Ray Gun. She zombifies Emperor Jon's guards. Professor Wally calls the Pet Force: Garzooka, who can spit green hairballs out of his mouth, Odious, who can whack and move objects with his powerful tongue, Abnermal, who can can run at an amazing speed and Starlena, who can freeze her enemies by staring at them. But Vetvix zombifies every member of the Pet Force except Garzooka. He manages to get hold of the Klopman Crystal and escapes with Professor Wally in a secret passageway. Professor Wally uses his computer to search the universe for counterparts with DNA matches with the Pet Force. Professor Wally finds the counterparts, and give Garzooka their pictures and some serums that will transform the counterparts into the Pet Force, and he flies away in his space ship to Comic Strip World leaving Professor Wally behind with Vetvix vowing for revenge.

The situation was revealed to be a comic book that Nermal was reading during a cookout with the gang. Nermal is really excited and fanatical about getting the next 100th edition issue. Garfield's friends go to the Comic studio to work their new strip, except Garfield, who wants to finish all the hot dogs. Nermal gets the new Pet Force issue from a newsstand, with Garzooka jumping out of a comic book afterwards. Nermal finds that the events that are happening to them are in the comic book, and the rest of the book is blank because they have not happened yet. Garzooka heads for Jon's house, and is told where Odie, Arlene, and Nermal are by Garfield. Garzooka gives Garfield the Klopman crtstal as well, telling him to protect it.

In the living room at the Comic Studio, Nermal, Arlene, and Odie notice Garzooka behind them. Garzooka hands them the serums, asking them to help him stop Vetvix. But they don't change immediately after they drink the serums. However, it was time for Odie, Arlene, and Nermal to go to work and Garzooka follows. Meanwhile, Garfield (who is real) enjoys a relaxing day all to himself, but is captured by Vetvix (who appeared in Comic Strip World earlier), who evidently threatens him for the Klopman Crystal, but to no avail (because Garfield was a cartoon character). Garfield tries to protect the Klopman Crystal by putting it in his lemonade, and drinks it. But eventually Vetvix's guards get it. Garfield is told by Professor Wally to go over to Emperor Jon and him. He tells Garfield to grab the Professor's lens and puts them on the window. The sunlight burns the Emperor and the professor's ropes. Vetvix orders her guards to get rid of Garfield, so they throw Garfield down the garbage chute.

Back at Comic Studios, the gang was interrupted by Vetvix, who crashes her war ship into Comic Studios, and zombifies most of the characters at the studio. Nermal, Odie, Arlene, Jon, and Gazooka escape to the back alley. Garzooka is wondering why the serums haven't taken effect yet. He notices Garfield falling from sky. Then Odie, Nermal, and Arlene turn into their Pet Force counterparts. They plan to bring down Vetvix's ship using the antenna on top of a tall tower nearby. Vetvix's ship backs up, causing a billboard to break to pieces. The Pet Force hide under one of the broken pieces of the billboard and escape while being chased by zombies and manage to reach the tower by crashing through walls. Garfield, Jon, and a cartoon trash can are the only ones left in the back alley. Eli saves Garfield from Vetvix, by making the air vent suck him. Jon, however, gets scrambled with the trashcan. Vetvix causes chaos, zombifying all of Cartoon World. Eli scolds Garfield for not helping Garzooka and if haven't been so lazy then Vetvix wouldn't have gotten the Klopman Crystal. Eli and Garfield manage to find three survivors: Wally, Bonita, and Betty. Garfield decides to name himself and the survivors "The Crazy Crew" and form their own plan. Meanwhile at the tower, Garzooka realizes the zombies are too much for the Pet Force. Luckily Garfield and Wally disguise themselves as Garzooka (Garfield stands on top of Wally to make the fake Garzooka taller)) and get the zombies attention. The real Garzooka and the Pet Force go to the antenna and use it to bring down Vetvix's ship. Meanwhile, the zombies chase Garfield and Wally to the Comic Studio, and Eil opens the pit in the filming area, in which the zombies fall into. Meanwhile, at the tower, Vetvix shoots the Moscram Ray Gun, using the super scramble mode, combining all of the Pet Force members into one creature. However, they move in different direction, and they fall off the tower.

Emperor Jon and Professor Wally break free, and take over the ship, flying into the air, making Vetvix fall off. However, she makes a giant monster by shooting the ray gun at most of the buildings in Cartoon World, and decides to use the monster to destroy everything and get her ship back. Meanwhile, Vetvix's ship (with Professor Wally and Emperor Jon controlling it) lands near the back alley of Comic Studio, and the Crazy Crew meet Emperor Jon and Professor Wally, who let Garfield enter the ship. The ship flies above the monster, and Garfield jumps off, just as the monster grabs the wings of the ship, wrecking it. The monster chases Garfield. During the chase, Garfield encounters the creature combined with the Pet Force members. They try to attack Garfield, but they miss and end up attacking the monster. Odie chases Garfield using his tongue. Garfield runs around the monsters, and the monster trips. Vetvix falls off and drops the gun. Garfield unscrambles the monster and the Pet Force creature. Garfield and the "Crazy Crew" surround Vetvix, and she backs up into a corner called the "Smile Section", which Betty invented. The "Smile Section" will anyone who goes into it think of happy thoughts and smile. Garfield shoots Vetvix with the Moscram Ray Gun, and Vetvix becomes a nice, peaceful, and empathetic woman and says "sorry" to Emperor Jon and kisses him. Eli opens the pit and Garfield unscrambles the zombies. Garzooka gives Arlene, Odie, and Nermal the red serums, and drink it. Nermal misses having his superpowers, so Garzooka gives him a matching costume. The Comic Studio crew, Garfield, his friends, and the Pet Force watch Vetvix and Emperor Jon's wedding, Garfield finally wins Arlene's feelings, and two gaze at the stars. Suddenly, a trail of stars goes under them and they float into space and dance, before returning to Earth.

Two minutes in the credits while watching Emperor Jon's wedding, the gang watched the video (showing that the real Pet Force is back) at Comic Studio. They notice that Betty is there too, and realize that she followed Garzooka to Dorkon. It looks like there will have to be a new assistant to Charles, the director of Comic Studio, which Nermal is eager to take. 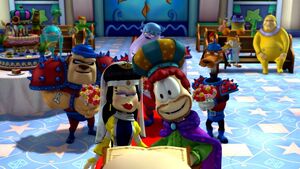 Vetvix in the fake wedding. 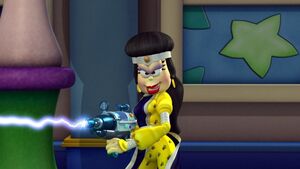 "Say hello to my little friend!" 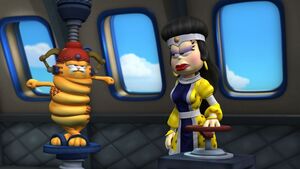 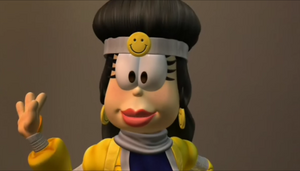 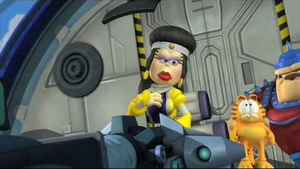 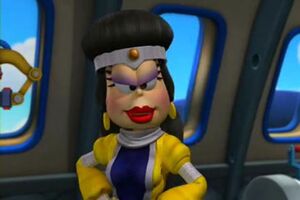 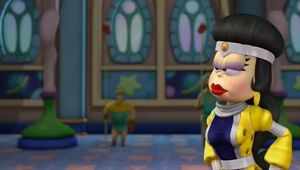 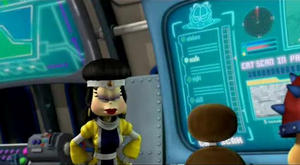 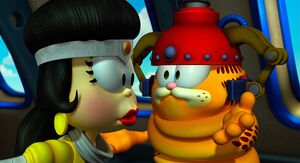 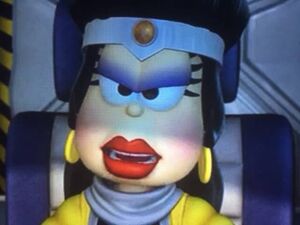 Retrieved from "https://villains.fandom.com/wiki/Vetvix?oldid=4388267"
Community content is available under CC-BY-SA unless otherwise noted.