Member of the Thieves Guild

Vex is a thief and a member of the Thieves Guild in The Elder Scrolls V: Skyrim. She is one of the staff in the Thieves Guild, along with Delvin Mallory, Mercer Frey and Brynjolf. In Loud and Clear, it is revealed that Vex failed to infiltrate Goldenglow Estate because the owner hired mercenaries. She barely escaped with her life.

Vex is known to be arrogant. This is seen when first meeting her. Vex is known as the best infiltrator of the Thieves Guild and demands that The Dragonborn does not even think about replacing her.If The Dragonborn speaks to Vex without accepting any jobs from her, she will be annoyed. If The Dragonborn decides against taking a job when offered, or quits a job before completion, she will also be frustrated.

However, if The Dragonborn is the leader of the Thieves Guild and refuses or quits a job, she shows no frustration, implying The Dragonborn may have earned her respect. Vex is also somewhat short-tempered, which shows when Mercer Frey's betrayal sees the light. She loses her cool and unsheathes her dagger saying that she will kill Frey.

When Mercery Frey and Brynjolf send The Dragonborn to steal from Goldenglow Estate's safe, The Dragonborn can speak with Vex for advice about how to infiltrate the estate. Vex will acknowledge that she failed the job and that Aringoth, the estate's owner, nearly tripled the guard and claimed that there were at least eight mercenaries. She advises The Dragonborn to use the sewer tunnel in the northwest part of the estate's island. Doing this is optional.

Once Mercer Frey's betrayal is discovered, Vex loses her temper and says she will kill Frey. After the rest of the guild staff calm her down Brynjolf orders Vex to watch for Frey; see if he returns. Brynjolf tells The Dragonborn to infiltrate Frey's house to find any clues where he went. Brynjolf also states that Frey has a guard named Vald, and that Vex and Vald were once in a relationship. Vex can be asked how to get on Vald's good side to coax him to let The Dragonborn enter Frey's house. Vex says that The Dragonborn will have to buy him off.

The Dragonborn is tasked with tracking down an Isabelle Rolaine who ran off with Vex who tells The Dragonborn that Rolaine wanted to become a thief when questioned. Vex told Rolaine she was not cut out for thievery, but Rolaine was persistent and Vex pointed her to Hobs Fall Cave for unknown reasons.

Vex tasks The Dragonborn to plant false evidence in someone's house. If a resident is killed, or The Dragonborn gets arrested, his/her pay is forfeited.

Vex hires The Dragonborn to break into someone's strongbox and steal the valuables inside. The Dragonborn forfeits pay if he/she kills a resident or gets arrested. 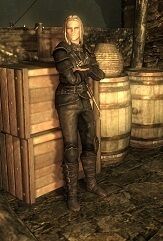 Vex in the Ragged Flagon. 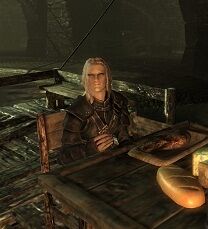 Vex sitting at the table.