"Our little Vex" by Brynjolf

Vex is a thief and a member of the Thieves Guild in The Elder Scrolls V: Skyrim.She is one of the most important person in the guild , along with Delvin, Mercer Frey and Brynjolf , known to be the best infiltrator in the guild.Vex is arrogant about this thing and she tells Dragonborn to not even think about replacing her.One of the quest reveal that Vex failed to infiltrate Goldenglow Estate because the owner hired mercenaries and she was wounded.When the guild discover , Mercer Frey's betrayal, Vex gets angry and draw her dagger saying that she will kill him.

Vex in the Ragged Flagon. 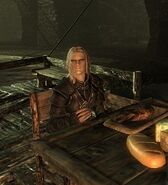 Vex sitting at the table.
Add a photo to this gallery

Retrieved from "https://villains.fandom.com/wiki/Vex?oldid=1813575"
Community content is available under CC-BY-SA unless otherwise noted.