Torment the Losers Club (both failed).

Victor "Vic" Criss is a supporting antagonist in Stephen King's 1986 novel IT and its miniseries and film adaptations. He was the right hand man to Henry Bowers' and one of the members in his gang except in the miniseries where Belch has this role

He was portrayed by the late Gabe Khouth in the 1990 miniseries, and by Logan Thompson in the 2017 film.

Henry, Victor Criss, and Belch would often pick on the Losers, the seven main characters. While chasing after one of them, Mike Hanlon, they engaged in a rockfight with the Losers and lost. Henry swore to kill them all. As they made their way into the sewer to fight IT, Henry and his friends followed them in to kill them.

The group separated, an act which led to their deaths, save Henry who was traumatized by his encounter with IT. IT assumed the form of Frankenstein's Monster and ripped off Victor's head. And later IT uses the form of a zombie Vic Criss to help Henry escape.

Similar to the novel, Vic is portrayed as one of the two best friends of Henry Bowers, aside from Belch Huggins. He is the overall smallest member of the Bowers Gang and, like them, has a greaser-esque appearance simillar to the novel, albiet a gray jacket and a haircut resembling Henry's. However, he is also given a more minor role than the novel and behaves somewhat differently: Whilst having good morals in the book and being disturbed by Henry's increasing sociopathy, Victor shows much less reluctance to go along with his malice in the miniseries, with the one arguable exception when Henry tries to carve his name on Ben Hanscom's belly with a switchblade, causing Victor to remark "Come on, don't really cut him". His death is also different from the book. Rather than death by decapitation at the hands of IT in the form of Frankenstein's Monster, Vic is killed by IT in the form of "Deadlights" after being ordered to splinter off during an ambush on the Losers and chase them towards Henry and Belch who would be lying in wait.

Vic is one of the main antagonists of the Losers, alongside Henry Bowers and co. His physical character is designed in a 1980s punkish type, and he is shown with bleached hair. Victor is also a bit more sadistic than in the novel and has less qualms with bullying. Vic is seen with Bowers gang in the school watching the Losers pass. When outside Vic doesn't particapate in harrasing them. Vic waits by the car and enters with the rest of the gang. Vic rides in the backseat of Belch's Trans-Am, and doesn't seem to have much of a part in tormenting Mike Hanlon with Henry and Belch, after Mike has a disturbing encounter with IT in a butcher's shop. However, Vic is more malevolent than his previous depictions because unlike the novel and miniseries, has no qualms with Henry cutting Ben instead smiling sadistacally. In a deleted scene, Vic asked Henry of his "old man" get into him about losing the switchblade. He is shown beating Mike up with the Gang later, and takes part in the rock fight before departing with Belch.

Later, Vic is shown with Henry and Belch while Henry is shooting objects for fun. He is shown to be scared of Butch Bowers, Henry's father, when he comes over, and scares Henry into submission by shooting the ground with his pistol.

Vic later asks Henry if he is okay while Henry is trying to recover from his father's abuse. Henry doesn't answer; he just walks over to the mailbox, where is a balloon hovering over the box, completely oblivious to all else. Inside Henry finds his lost pocketknife, and murders his father.

In a scene cut from the movie, Henry kills Vic and Belch by slitting their throats and puts their bodies in Belch's car with where he then drives to the Nelbiot House while talking to their dead bodies completely insane. This is unlike the novel and the miniseries, where Vic and Belch follow Henry down to the sewer and are killed by IT. It's unknown if Vic and Belch's bodies were ever found. 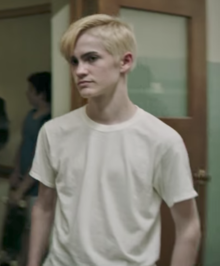 Vic's corpse alongside Belch's, after being killed by Henry in the 2017 film.
Add a photo to this gallery

Retrieved from "https://villains.fandom.com/wiki/Vic_Criss?oldid=3805124"
Community content is available under CC-BY-SA unless otherwise noted.