Steal two live nuclear warheads that he and Riley had been tasked with resuming them to the US from Utah and take hold of them for gaining ransom of two-hundred and fifty million dollars.

Major Vic "Deak" Deakins is the main antagonist in the 1996 film Broken Arrow.

He was portrayed by John Travolta in his first villainous role, who also portrays Castor Troy in Face/Off, Gabriel Shear in Swordfish, Terl in Battlefield Earth, Billy Nolan in Carrie, Howard Saint in The Punisher, Emil Kovač in Killing Season, and Ryder in The Taking of Pelham 1 2 3.

Vic appears at first as a bit harsh and arrogant, but a good and caring mentor to Riley. It is also revealed his arrogance towards others is seemingly the reason why he was turned over the military promotion. However, taking it not very well, he becomes a ruthless and greedy traitor, shedding all his redeeming traits. However, during a confrontation with the hero, he implies that his terroristic act is not only due to the refusal of his promotion but simply because he could. He also threw away his friendship with Riley, taunting and belliting him. During the course of the movie, he becomes progressively more unhinged, as he acts in a strange manner, smiling weirdly and declaring himself "out of his mind". At the end, he loses it totally, being willing to take his life and also his men to the grave just out of spite of being prived of his mean to escape.

Deakins, often known by the nickname "Deak", was, at first, a good mentor to Riley Hale, until he plans a mutiny overnight. Just before a nuclear test over Utah, Deakins betrays Hale by attempting to kill him, but Hale fought him off, forcing Deakins to go astray from the original contact location where he was supposed to release the dual bombs for his fellow terrorists to retrieve. Before Hale can subdue Deakins with a gun, Deakins ejects Hale from the plane. Losing control of the bomber, Deakins jettisons the nukes to a far-off location from the original dropping point, before ejecting himself from the bomber as well, but not before lying to the USAF that Hale had gone Rogue.

Deakins' men then begin a wide search for the bombs, killing anyone who are unlucky to be in their way. Hale survived and paired up with a park ranger named Terry Carmichael, and the two set out to stop Deakins from using the nuclear bombs. In the first half of the movie, Vic taunts, vexes, and mocks his former pupil, all the while putting up with Pritchett, a small-minded and irritable financier of Deakins and his band of terrorists. After several gun battles and car chases, Hale ambushes and carjacks a Humvee that contained the nuclear weapons, actually outsmarting Deakins the first time. Hale and Carmichael take nukes to an abandoned mine in an attempt to disable them but accidentally arm one, as Deakins had anticipated his ex-pupil's moves.

After securing the second nuke, Deakins sets the first on a shorter fuse once again in an attempt to kill Hale and Carmichael, much to the annoyance of Pritchett. The armed nuke explodes underground the mine where Hale and Carmichael is trapped, causing an earthquake. But the pair managed to swim their way out of the mine through an underground river before they can be caught in the nuclear blast. Pritchett unwisely nettles Deakins' patience one too many times and is killed by him. A NEST team tries to stop Vic, but they all are killed when the first nuke's explosion causes an EMP and their helicopter crashes. Deakins eventually secures his bargaining chip through a boat and drives off, not knowing Carmichael is secretly stowed onboard (Hale and Carmichael attempted to sabotage the boat containing the nuke but was forced to abandon that plan when Deakins returned with the nuke earlier than the pair anticipated, getting themselves separated from each other in the process). Hale, meanwhile, is extricated by a USAF search and rescue team, who learns the truth. Here Deakins' attitude towards Hale changes: first dismissing his former subordinate as inferior, now acknowledges Hale as a troublesome threat, and doesn't seem to be fully convinced that Hale is dead.

After blackmailing the government, Deakins transports the bomb onboard a train to his intended target in Denver, with a helicopter for Deakins to operate the nuke from a relatively safe location. Just then, the battle for the nuke begins; first Carmichael in the train, then Hale eventually returning and rejoining the fray as the battle between Deakins' team and Hale-Carmichael pair ensue as Deakins' henchmen are killed left and right. Also in the battle, the getaway helicopter of Deakins is sabotaged by the Hale-Carmichael pair and blown up, preventing Deakins' means of escape. Outraged that his plan is falling apart, Deakins sets the nuke to go off early in a suicidal insanity born of desperation.

A shocked henchman named Kelly tries with no avail to get his boss to stop the bomb's detonation, and is knocked from the train to his death when Hale ambushes the duo. With all his associates and men dead, Deakins wages one final hand-to-hand battle with his former friend onboard the train in a bid for the control of one remaining nuke. After a brutal and vicious brawl, Hale ultimately bests Deakins, successfully disarms the bomb and escapes from the carriage. Carmichael meanwhile had previously detached the end carriages of the train and as the bomb car comes to a halt, the carriages crash into it and send the harmless nuke hurtling into Deakins' chest with him having just enough time to deliver one final smile. This propels him backwards into a stack of TNT barrels, which destroys the entire train and incinerating Deakins. 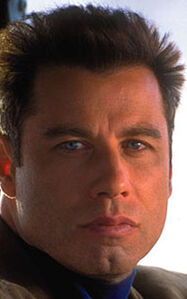 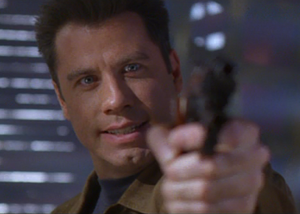 Vic with a gun

Vic shortly before he dies 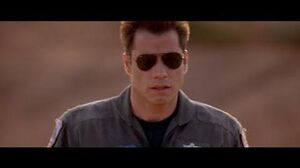