In total control of his empire

Secretly possesses the enhanced characteristics of a hemophage

Have the Archministry create a new disease from the antigens in the blood of a boy named Six, then sell the cure to the highest bidder to maintain control over the population (both failed).

Vice-Cardinal Ferdinand Daxus is the main antagonist in the 2006 sci-fi action movie Ultraviolet. He was a megalomanical, ruthless, and psychotic supervillain who is the head of a medical corporation called the Archministry.

He was portrayed by Nick Chinlund, who also portrayed Jacob McGivens in The Legend of Zorro.

Daxus is the head of a militant medical group known as the Archministry and a powerful government official in the year 2078. A few years previously, a global epidemic had caused vampire-like symptoms in a vast majority of the population, consisting of elongated canines and superhuman strength. The infected humans, called 'hemophages', die after twelve years of having these symptoms, but Daxus and the Archministry attempt to capture the hemophages and eliminate them in order to keep the virus under control.

One infected citizen, named Violet Song Jat Shariff, is involved in a resistance group to try and protect herself and the other hemophages from Daxus and his minions, and using her extraordinary strength, manages to steal a weapon supposedly created to exterminate all hemophages. The weapon is revealed to be a young boy named 'Six', whose blood is believed to contain antigens which could be used to create a cure for the disease.

Violet leaves with Six and meets with Daxus, who tells her that the boy is his son and demands that she hands him over to him. Violet, knowing that Daxus is lying, escapes with Six and takes him to her friend Garth, another member of the resistance. Garth tells her that Six's blood does not actually possess any antigens and the only antigens present are fatal to humans. It is revealed that Six has only eight hours left to live and, as well as this, he is radioactive which would allow Daxus to track him easily. Daxus later tells Violet that Six is in fact his clone and, now that the hemophages are close to being eliminated, the Archministry are preparing to create a new disease from the deadly antigens in Six's blood and spread it worldwide. Daxus would then sell the cure for the new disease to the highest bidders in order to maintain his control over the population, but he refuses to give the cure to Violet. Knowing that Six will die soon, she decides to let him spend his last moments in a playground, but Daxus soon arrives and captures him. He then shoots Violet, apparently killing her, before leaving.

Violet is saved from death by Garth and realises that Six may not actually be dead yet. She travels to the Archministry's headquarters, killing wave after wave of Daxus' forces, before finally confronting the villain himself before he can dissect Six. She and Daxus engage in a sword fight, with Daxus telling Violet that he was exposed to the hemophage virus himself and had been using the symptoms to help him in his rise to power. As the battle continues, Daxus tries to gain the upper hand over Violet by electronically shielding every window in the chamber, creating pitch darkness within. Daxus reveals that he has greater light sensitivity than Violet which means he is able to see her in the dark, but Violet strikes her sword on the ground until it catches fire. She uses the light of the flames to sneak up behind Daxus before aiming a fire pistol at him, which engulfs Daxus in flames. She then finishes him off by slicing his flaming body in half with her sword. 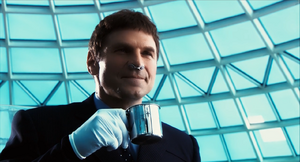 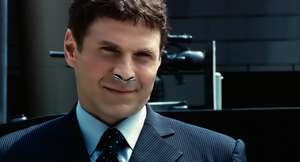 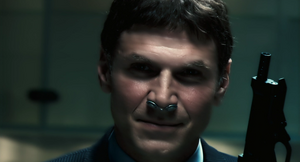 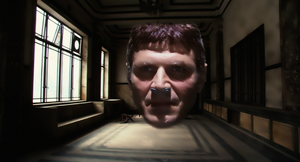 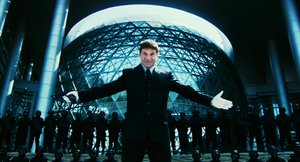 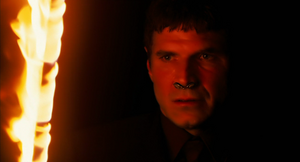 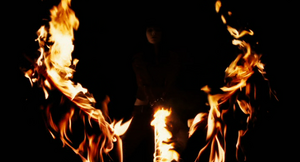 Daxus being sliced in half with a flaming sword.
Add a photo to this gallery
Retrieved from "https://villains.fandom.com/wiki/Vice-Cardinal_Ferdinand_Daxus?oldid=4333602"
Community content is available under CC-BY-SA unless otherwise noted.