The Vice Squad are an elite branch in of the Vice City Police Department (VCPD). They appear and begin to chase Tommy Vercetti when the player reaches upon a 3 felony star level.

Killing a Vice Squad member will cause them to drop both their weapon and two wads of cash: The Vice Squad are the only cops who carry/drop money upon getting killed as well as being revived to again chase/fight the player.

The Vice Squad are based in the Little Havana Police Station. A VCPD Cheetha spawns at the back of the station.

The Vice Squad are meant to emulate Sonny Crockett, Ricardo Tubbs, Lt Martin Costillo and other characters from the 80s TV series and 2000s film adaption Miami Vice, a drama focusing on well dressed, seemingly overpaid officers in Miami who drive expensive sports cars and live a life of luxury and adventure. They are slightly the most dangerous officers in GTA VC AND VCS next to the SWAT and FBI, since they can be revived after being killed. 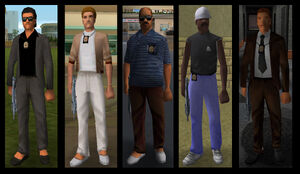 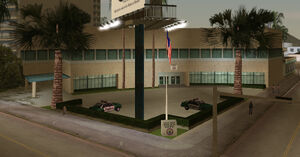 Little Havana PD
Add a photo to this gallery

Retrieved from "https://villains.fandom.com/wiki/Vice_Squad?oldid=2557927"
Community content is available under CC-BY-SA unless otherwise noted.