Leader of the Poacher gang

Vice Terhune is the first boss and a minor antagonist of the 1993 arcade beat 'em up game Cadillacs and Dinosaurs.

Vice Terhune is a poacher and the leader of a gang of poachers that hunt animals.

In the boss battle, Vice Terhune jumps and punches to the player. And, he shoots his revolver to call the other poachers.

Vice Terhune after his defeat. 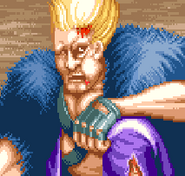 Vice Terhune aiming a revolver at the player during the game over sequence.

The player punching Vice Terhune during the game over sequence, showing their desire to continue.
Add a photo to this gallery

Retrieved from "https://villains.fandom.com/wiki/Vice_Terhune?oldid=4208014"
Community content is available under CC-BY-SA unless otherwise noted.