Leader of the Children of Arkham

Drugging people with a chemical that makes them lose their morals and behave impulsively.

Avenge her biological parents' death and life of suffering by killing Bruce Wayne and spreading chaos among the people of Gotham (failed).

Kill her foster-parents for torturing her (succeeded).

Victoria "Vicki" Vale, born as Victoria Arkham, and also known as Lady Arkham, is the main antagonist of Telltale Games' Batman series, serving as the main antagonist of the 2016 video game Batman: The Telltale Series and a posthumous antagonist in the game's 2017 sequel Batman: The Enemy Within. She is the fanatical leader of the Children of Arkham, and guises as an investigative reporter for the Gotham Gazette in order to hide her true colors.

Forming the Children of Arkham

Vicki Vale was born as Victoria Arkham. Her parents were running Arkham Asylum until the corrupt Thomas Wayne had them both killed for not giving up the Asylum. Obsessed with vengeance, she vowed to get even with the Waynes. After the murder of her birth parents, she was adopted by the Vale family and was renamed Vicki Vale. However, it was later revealed that Vicki was brutally abused by her foster-parents in a secret hole in their basement, where she created the Lady Arkham persona.

Fueled by fanaticism, delusion, and hatred, Vicki joined the now-reformed Children of Arkham and became their leader. They were a political reform group-turned-fanatical terrorist organization who claimed that their motive is to "clean up" the corruption in Gotham City, usually by murder. But Vicki's true motive was personal revenge against Mayor Hamilton Hill, Carmine Falcone, and Bruce Wayne (even though Bruce was never involved in his father's corruption, she still holds him responsible), and also wanted the people of Gotham to suffer as she did, by spreading chaos throughout the city.

She also developed a powerful drug that makes people lose their morals and makes them act on their basic impulses, while a concentrated dose will permanently lock them in a mentally unstable state of mind.

In the third episode "New World Order", Vicki Vale injects Bruce Wayne with the psychosis-inducing drug during a press conference in which Oswald Cobblepot (secretly her second-in-command, the Penguin) is appointed the CEO of Wayne Enterprises, revealing that she is actually Lady Arkham. She coaxes Bruce into attacking Cobblepot, which he ultimately does. This action causes Bruce to be ironically incarcerated at Arkham Asylum.

In the fourth episode "Guardian of Gotham", Vicki Vale fakes her own kidnapping and fully adopts her Lady Arkham persona. She goes to her adoptive parents home and brutally attacks her mother, lethally injecting her with a dose of her drug before gouging out her eyes, killing her. She then attacked her adoptive father, beating him to a bloody pulp with a belt (like how they used belts to torture her), before she hung him up with the belt by the neck like a noose, though the blood loss killed him instead of the hanging. She left her brother alive, showing compassion for him and that she seemed to actually care for him. She then used her father's warehouse to store her drugs, but they were later destroyed by Mayor Harvey Dent/Two-Face and his Enforcers.

One Last Fight with Batman

In the fifth episode "City of Light", Vicki storms Wayne Manor together with the Children of Arkham while Bruce is gone. They capture Alfred Pennyworth and bring him to Arkham Asylum, intending to lure Batman there. When Batman turns up, Vicki opens all cells of the asylum, allowing the inmates to roam free. Most immediately attack Batman, while Vicki flees deeper into the asylum.

Eventually, Batman is able to catch up to her and manages to break her mask into pieces with a single punch. Vicki is saved when Batman is attacked by Victor Zsasz, but moments later, Batman catches up to her again. He demands to know where Alfred is and, claiming that she will bring Batman to him, Vicki destroys the floor below them with her staff, causing both to drop into an older, abandoned part of the asylum. Down there, Vicki evades Batman once more. Before escaping for good, Vicki orders Batman to bring Bruce Wayne to her, threatening to murder Alfred should he refuse.

Further venturing through the old canals, Batman finds a tied-up Alfred in a chapel-like room. While trying to cut him loose, Batman is attacked by Vicki, who quickly gains the upper hand by threatening Alfred with her energy staff. Vicki notices how Batman talks to Alfred, noticing the caring tone. To find out how much Alfred means to Batman, Vicki starts beating Alfred up. Once again threatening to kill Alfred, Vicki orders Batman to remove his mask, leaving the latter with the conflicting choice of unmasking himself or refusing to do so.

Batman complies, removing his cowl and throwing it to the ground despite Alfred's pleas not to. While Vicki is shocked to see Bruce's face, she initially refuses to believe it at first as she says that he only cares about himself, but deludes herself into foolishly believing once again that Bruce is Batman so he can prey on the weak and defenseless like his father did. She then fires her energy staff at Bruce, who quickly dodges the blast, but not fast enough that it was able to take out a small chunk of his right ear. Vicki maniacally laughs before she knocks Alfred to the floor with her energy staff.

Batman refuses, pulling out a Batarang while Vicki talks and then throwing it at Alfred's restraints, allowing the latter to break free and punch Vicki in the face. However, she quickly retaliates by firing her energy staff at Alfred's head, and while the blast doesn't kill him instantly, it instead takes out his left eye, much to Batman's horror. Alfred quickly crawls away while Vicki manically laughs.

An intense fight then ensues in which Vicki attacks with her energy staff - claiming that the only truth left will be in Bruce/Batman's death. However, while Vicki mindlessly attempts to murder Bruce/Batman she does not realize that she is causing damage to the surrounding structure. When Bruce/Batman uses her powerful staff against her, Vicki is blasted through a column, causing the walls to crumble. Ultimately, Bruce/Batman defeats Vicki, smashing her into the altar, but due to the damage dealt to the structure, the entire hall starts to break down. Intending to leave Bruce/Batman and Alfred in the collapsing hall, Vicki activates her hover boots to escape. However, Bruce/Batman stops her with her own energy staff once more, smashing her into a wall. While Bruce/Batman frees or helps Alfred up, Vicki attempts to leave the hall on foot but is crushed to her death when the ceiling collapses onto her, ending her obsession for revenge against Gotham.

A week later after the battle between her and Batman, her body was never found (only her mask and broken staff was recovered) and Bruce wasn't sure if she was dead or alive, but the Children of Arkham was dissolved after her defeat.

Following Vicki's death, the remaining members of the Children of Arkham and the escaped patients were all rounded up by the GCPD. The group was subsequently disbanded, with its members now serving various sentences in Blackgate Prison and Arkham Asylum. News reports would also report of Vicki's involvement as Lady Arkham, along with her defeat at Batman's hands. Batman would keep a display of Lady Arkham in the Batcave, which consisted of her concussion staff and either her broken mask or doll (depending on whether he attacked her or unmasked himself). If Bruce attends Gordon's rally, he can announce plans to renovate Arkham Asylum, in memory of her family and to help it recover from his father's actions.

Vicki Vale was first seen as a motivated and supporting character. It turns out that she is fanatic, ruthless, manipulative and unhinged. According to "John Doe", her parent's deaths left her with "an unquenchable thirst for vengeance", meaning she is obsessed for revenge (also shown by the murder of her adopted parents, leaving a vendetta sign on her mother by stabbing out her eyes). She always tries to justify her violent actions by pointing out certain kinds of motivations (mostly about her tragic past), making her delusional. She also shows signs of mental instability, caused by her foster-parents abusing of her. She did seem to care for her adoptive brother, leaving him alive at her house and even had a picture of them together below Arkham, embracing him in a hug. 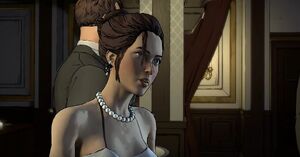 Vicki meets up with Bruce after the press conference for the Thomas & Martha Wayne Memorial Hospital.

Vicki speaks with Bruce after being given incriminating evidence against Carmine Falcone. (determinant)

Vicki "taken hostage" by Penguin at the Mayoral Debate.

Lady Arkham addresses the audience at the debate. 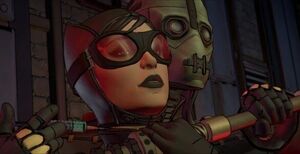 Lady Arkham holds Catwoman hostage with a syringe containing the psychoactive chemical against her neck, threatening to inject her with a lethal dose. 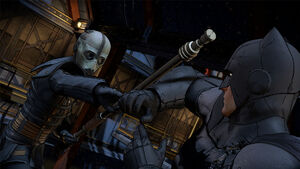 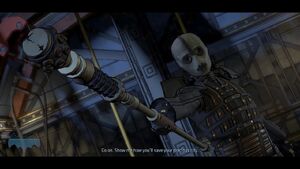 Lady Arkham monologuing in her fight with Batman. 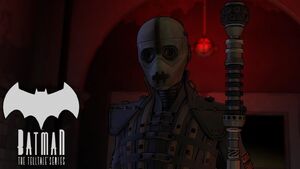 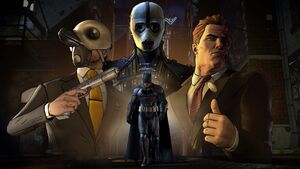 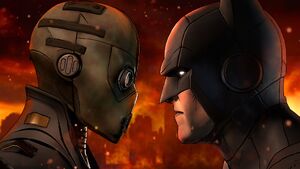