Vicky is the central antagonist of The Fairly OddParents.

She is one of Timmy Turner's archenemies (alongside Denzel Crocker and Francis) and his sadistic, arrogant and cruel babysitter. She was also the main antagonist of the TV movie, "Channel Chasers".

She was voiced by Grey DeLisle, who also voiced Azula in Avatar: The Last Airbender, Asajj Ventress in Star Wars: Clone Wars, Mandy in both Grim & Evil and The Grim Adventures of Billy & Mandy, Vexus in Crossy Road: The Series, the High Priestess in Samurai Jack, Major Doctor Ghastly in Evil Con Crane, and Pixie Dusters in Onward. In live-action, she was portrayed by Devon Weigel in A Fairly Odd Movie: Grow Up, Timmy Turner! and by Mary Kate Wiles in Fairly Odder.

Vicky has orange hair, pink eyes, an outie belly button, and usually wears a green belly shirt, and black pants and shoes. She often puts on a softer, sweeter tone in the presence of Timmy's parents. However, whenever she is alone with Timmy, Vicky will scream and holler at him. Vicky was also shown at age of 18 in "Channel Chasers", having a more shapely body and wearing gold earrings.

To the eyes of adults, Vicky is a seemingly sweet girl who has a continuous liking for cash. Once Timmy's Mom and Dad are gone, she tortures Timmy Turner so quickly that it takes one second to wreck the place, and knowing that his parents are nitwits, it is easy to fool them. Timmy often gets revenge or revamps her, such as wishing she was nice or switching roles so he could be the one who torments her.

Vicky is one of the most vituperative and horrible babysitters around; she cheats on contests, lies to children's parents, and tortures them in various ways for sadistic pleasure. Vicky is shown and unpleasant to adults and teenagers as well, such as trying to kidnapping celebrity Chip Skylark and trying to forcibly marry him for his money.

In earlier seasons, Vicky's bullying mainly consisted of verbal abuse, laziness, blackmail children with materials like adult magazines and forcing her wards to do all her chores before going to bed early. In a season 1 episode, Vicky actually panicked when Timmy was lost, though mainly because she would get in trouble with Timmy's parents rather then genuine concern for Timmy himself.

In later seasons, Vicky was openly physically abusive to children and frequently tries to attack Timmy with medieval weapons and torture devices. Vicky often attacked everyone around her like using a makeshift flamethrower to set a toy store on fire, with Timmy's parents being the only people unaware of her evil nature.

On the other hand, she does show a slightly softer side during some episodes. A great example would be during the Wishology three-parter. While she only helps Timmy save the world because he offered twenty bucks in return, she, like everyone else, expressed sorrow after he gave himself up for The Darkness. Later, not only does she show how happy she is after Timmy turns out to be alive, but she admits that she cannot resist Poof's smile. This shows that despite her hatred of children, she does have some redeeming traits.

As revealed in Abra-Catastrophe!, Vicky first started babysitting Timmy Turner when he was eight and she was fourteen. Timmy had found a flier advertising Vicky's babysitting service, and panicked and called this number when his parents tricked him into thinking he was being left alone. When Vicky arrived, she convinced Timmy's parents that they could use a babysitter so that they would have time for each other to go out and do adult things. From that point on, Vicky tormented Timmy whenever she babysat him, and his parents would continue to spend time away, leaving him under Vicky's cruel care. Timmy became so miserable that he needed fairy godparents. With them, he was able to use magic to get even with Vicky. Even with his fairies, Timmy is still challenged by Vicky over the course of the show. She has also worked other non-babysitting jobs, usually if they involve hurting others or holding sharp objects. In most of her early appearances, the simple act of saying her name would cause thunder and lightning to flash in the sky.

Vicky appears to have started babysitting at age fourteen or possibly earlier. When she first met Timmy when he was eight, she was just as mean as she is now. It is never explained why Vicky is the way that she is, although several conflicting plots have been put forth. In the episode "Snow Bound", she reveals that she had a rough childhood. In "Tiny Timmy", it is said that her niceness never showed up to work inside her brain. In "Vicky Loses Her Icky", the cause of her evilness is attributed to an evil bug that crawled up her butt (although it is equally likely that the bug was a pure concentration of her evil personality). In the episode "The Switch Glitch", after Timmy wished for Vicky to turn into a five-year-old, she was actually nice but turned bad when she wanted revenge on Timmy for being a mean babysitter. It has also been suggested in fanon that her sister Tootie being born was the cause of her disliking younger kids, and although this has never been explicitly stated, in the episode "The Masked Magician", Vicky lists Tootie first as she went through various enemies she had made in her life, as well as her own parents. Hanging in her house is a picture of an infant-aged Vicky that is shown with the same evil scowl she has in her later life, so it's possible she was born this way.

After Timmy Turner successfully defeated Vicky in the past and changed the bad future into a good one, twenty years passed by and Timmy is revealed to have two children, a son and a daughter. The children bear a resemblance to Vicky's little sister Tootie among other characters, meaning that these children would be Vicky's nephew and niece if Tootie married Timmy. Some fans even believe that Vicky herself could have been the mother, and even if so, it's possible that her children could have inherited genes from their grandmother. The two children are babysat by a robot that looks and acts like Vicky, so it is likely that Timmy has some connection with her in the future, or has at the very least reconciled with her. It is also possible, even implied in some of Adult Timmy's dialogue, that because he forgot about his fairies in his later life, Timmy eventually assumed that it was his parents, and by extension Vicky, who helped shape him into becoming a responsible adult instead of his fairies, and therefore he believes that hiring a babysitter that resembles Vicky will help shape his own children into responsible adults too. Vicky's exact connection with the robot is unknown, but if she makes and designs these robots, she is likely very rich and successful like she always wanted to be.

In the episode "Vicky Gets Fired", Timmy's parents attend a cinema and leave Timmy alone with Vicky, but this time, Timmy, determined to prove Vicky is evil, shows his parents a video in which she tapes over their extremely important videotape, causing her to be fired. Vicky then attempts to seek a new line of employment, although she only succeeds in torturing others, resulting in her getting fired by all her bosses, both literally and figuratively. Eventually, she goes to the mayor and reveals to Chompy the Goat that the mayor indulges himself in eating goat meat, causing the goat to chase him out of his office. Vicky then names herself the new mayor and takes over Dimmsdale, renames it "Vickyland" and attacks it with her newly established ape army. Timmy, who is enjoying the time of his life with his god-family, soon discovers that getting Vicky out of his life causes her to ruin everyone else's. Wanda proposes that they take fire-breathing battle-rhinos and a lion-cloth warrior to Vicky to depose her; however, they lose badly, and Timmy tries wishing that Vicky wasn't the mayor. Unfortunately, Vicky, not being mayor, becomes president of the U.S.A. instead and attacks the country with another armored ape army. Timmy tries unwishing that Vicky dominated reality again, only for Vicky to become the "Dark Empress of Everything that Breathes", and began attacking Earth with her Star-Destroyer-like warship. To save the Earth, Timmy reluctantly wishes that Vicky was his babysitter again in order to maintain peace.

Vicky was formerly a member of B.R.A.T. (Babysitters Raging Against Twerps) until she was rescued by Timmy Turner and felt grateful. Vicky tried to make a new life being Timmy's friend but he rejected her favors and Vicky returned to her organization more abusive than ever, so much so that their companions named her their new leader. On another occasion, she joined and subsequently lead L.O.S.E.R.S. (composed of Crocker, Dark Laser and Foop) and advised them on how to destroy Timmy once and for all, but after Timmy wished that these four enemies wanted to be him, all members (including her) ended up destroying each other. Vicky subsequently left the team after their initial failure and ends up being replaced by Timmy's dad (who thought he was joining a sewing club).

In the 2003 video game "Breakin' Da Rules", Vicky served as the main villain. After picking up Cosmo and Wanda's copy of Da Rules, Vicky received their wishing power and spent the game accidentally wishing Timmy into strange situations such as turning him into a dog or sending him into the past.

The 2004 movie Channel Chasers also featured Vicky as the main antagonist. After taking the Magic Remote away from Timmy and sabotaging the Turner house to frame Timmy for its destruction as well as getting Timmy in even more trouble with his infuriated parents with Timmy's parents still refusing to listen to their son about Vicky, Vicky discovered its power and planned on using it to get to the Biographical Channel and make herself a dictator. The film includes a look into the future where Vicky is victorious and leads an army of masked soldiers. A visit from the future Timmy to his young self assures Vicky's defeat in this plan and she ends up not remembering the events. In the end following her defeat, Timmy's parents fire Vicky for lying to them and being a mean and nasty babysitter to Timmy after finally discovering that Timmy was right about Vicky all along, thanks to "Deep Toot" (Tootie in disguise) clearing Timmy's name. This was Vicky's only significant movie role, and she served as the main antagonist for most of the movie.

In the 2009 three-part movie Wishology, Vicky joins forces with Timmy in exchange for twenty dollars. When Timmy "sacrifices" himself to The Darkness, she even shows a moment of remorse for Timmy. However, by the end of the movie, and definitely after Jorgen's memory wipe, she has reverted to her old self. 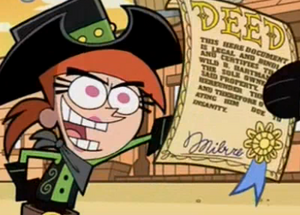 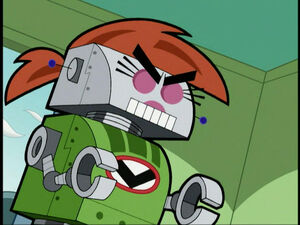 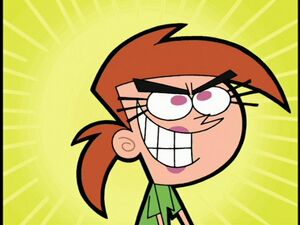 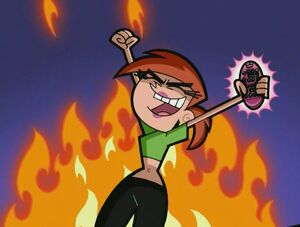 Vicky rising to power after discovering the powers in the magic remote. 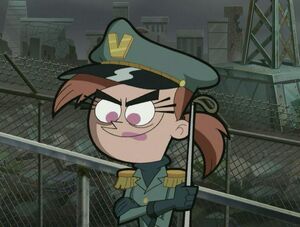 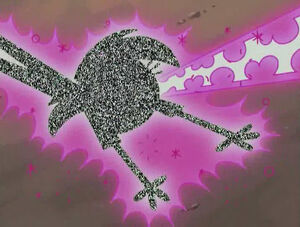 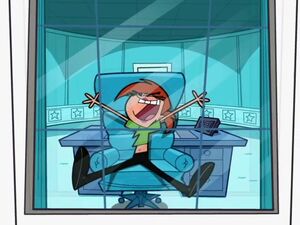 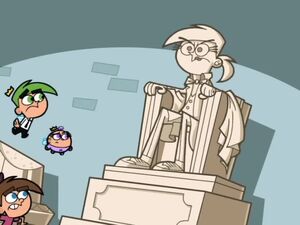 President of the U.S.A. 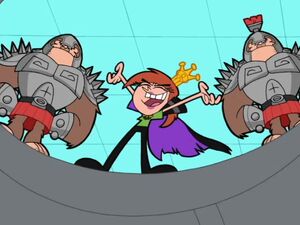 Dark Empress of Everything that Breathes 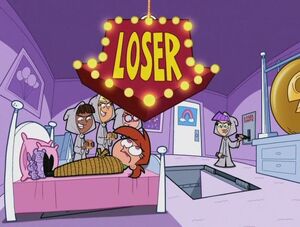 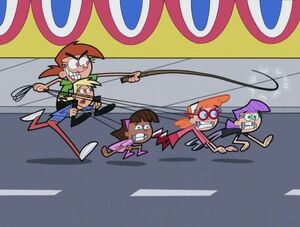 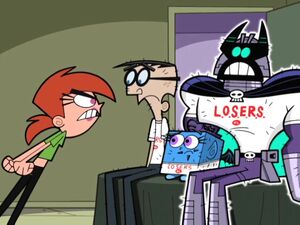 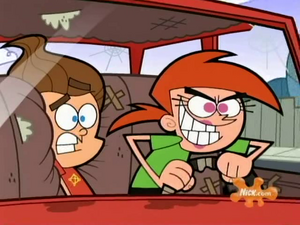 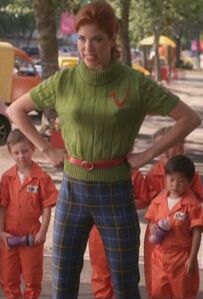 Vicky in A Fairly Odd Movie: Grow Up, Timmy Turner! 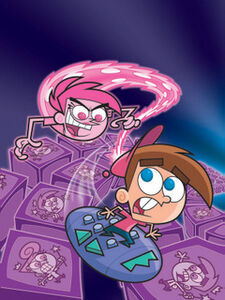 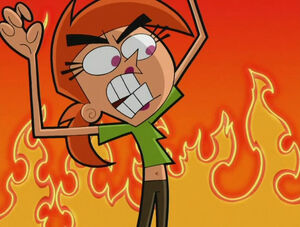 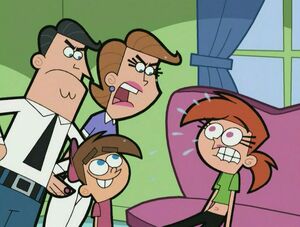 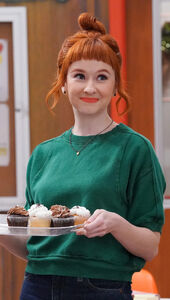