Vicomte Sébastien de Valmont is an anti-hero of Choderlos de Laclos's Dangerous Liaisons, which is adapted into five movies. His ex-lover Marquise de Merteuil asks him to humiliate her rival, Madame de Tourvel, by seducing and abandoning her, but he develops genuine feelings for her. He is killed in a duel.

In the 1988 film, was portrayed by John Malkovich, who also portrayed Mitch Leary in In the Line of Fire, Cyrus Grissom in Con Air, Humma Kavula in Hitch-hiker's Guide to the Galaxy, Quentin Turnbull in Jonah Hex, Pascal Sauvage in Johnny English, Galbatorix in Eragon, Teddy KGB in Rounders, Dave in The Penguins of Madagascar, and Teddy Deserve in Knockarouond Guys.

Seabstain was lover of his aunt's friend Marquise de Merteuil before she left him for another man caused Valmont to become gigolo and seduced married women or virgins to slept with women with his bed. when Marquise de Merteuil's lover dumped her to married her goddaughter Cécile de Volanges, she befinned and team up with Valmont for demeineted her revenge and she suggested Valmont to seduced Celice for her virginity in order to get revenge on her former lover and it was successful when Valmont ended up sleeping with her and his next victim was Madame de Tourvel, who is married woman who is faithful to her husband. 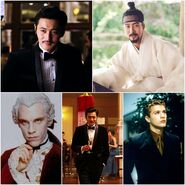