Get revenge on the Animator. (failed)

victim is a major character in the Animator vs. Animation franchise.

It serves as the main antagonist of the first installment, a posthumous character in Animator vs Animation II and Animation vs. YouTube, and one of the two playable protagonists/antagonists of the Animator vs. Animation Game.

It is the Animator's first known creation and the first to fight back against him. His later creation would lead to the creations of The Chosen One, The Dark Lord and The Second Coming.

The Animator creates the stick figure "victim" to mess with and torture. He begins by drawing the figure, naming it, and then proceeding to spin its box around, making it angry. When the Animator tries to crush it with a weight he draws, victim uses the weight to crush its box and escape, then attempts to seek revenge.

It begins by throwing pieces of its box at the cursor, then jump and grab the cursor until it throws it off. The Animator hits it with the cursor, dodges things that victim throws, and then tries to tie it up with the lasso tool. victim escapes, however, and the two begin creating weapons. As the Animator draws a gun, victim makes a makeshift bow and arrow from the program's icons and fires it at the cursor, temporarily pinning it. The Animator frees the cursor and begins firing the laser gun at victim, but the stick figure fills the gun with paint to make it malfunction and explode, causing the frames from the timeline to fall out. The programmer creates a gun that shoots timeline frames, but the stick figure blocks the frames by using the eraser tool. It then manages to throw the eraser and destroy the gun.

The Animator draws a throwing star and throws it at victim, then ties it up with the lasso tool again and tries to delete it. However, victim uses a paintbrush tool to cross out the option, then fight off the cursor in time to make it to the library and begin pulling duplicates of itself from it. These duplicates begin fashioning weapons from the window and program around them, and attack the cursor.

When the Animator tries to come up with a name for the new stick figure, he at first goes with "victim". He scratches that idea, and names the figure The Chosen One.

While victim itself never appears, the Animator's computer has the Blue Screen of Death, which would effectively destroy any remains of victim, if they even existed.

In the game, the player can choose between playing as the Animator or victim. As victim, the player must use various types of weaponry to fend off the Animator's attacks and destroy his animations, whole also attacking the cursor and scoring as many points as possible. 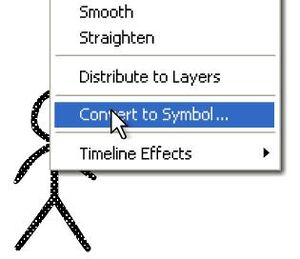 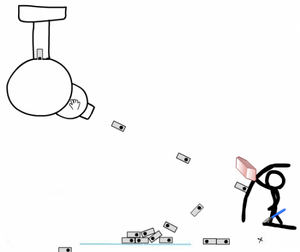 victim vs the Animator.

victim bringing out its duplicates. 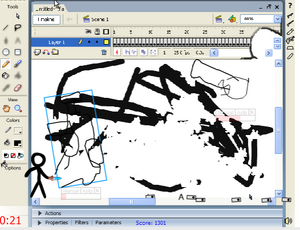 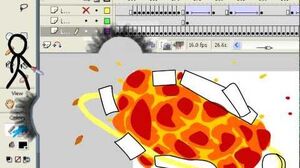 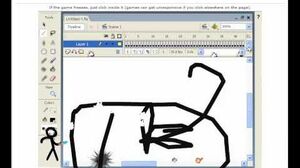