President of his medical company

Victor was an inner member of Kara and the president of his own medical company. After fighting in the Fourth Great Ninja War and suffering major injuries, Victor joined Kara. He worked alongside Deepa to cultivate his own god tree from the Hashirama cell to become immortal.

He was voiced by Chō.

Victor was a selfish and cunning man who plotted behind other's backs for his own benefit. He would put on a palatable and friendly look to those who did not know his true nature and would recite his fake goals of using his company to treat all type of illnesses. However, Victor was only concerned with taking the Hashirama cell so that he can build a replica of the god tree to gain eternal life. He viewed the employees of his own company of useful stepping stones that he can use to gain immortality. Victor was not loyal to anyone but himself as seen by how he tried to cultivate a god tree for himself and how he tried to sabotage Jigen. At times, Victor tended to be blunt and outright wrathful when anyone vexed him. He would also verbally lash out at Deepa for the latter's actions as it may bring the wrong attention to him. When his plans failed, Victor tend to lie and pin all the blame on Deepa. When he was cornered by Koji Kashin, he also tried to talk himself out of the situation he was in.

In the past, Victor was a combatant in the Fourth Shinobi World War against the Akatsuki army. During the war, he was severely injured and lost his leg and right eye. Since his time in the war, Victor started up his own company and managed to join Kara for his own self-interests.

Behind Kara's back, Victor worked alongside Deepa to try and find the Hashirama cell that was stolen from him. Victor wanted to use cell from the First Hokage to complete a replica of the god tree that appeared during the Fourth Great Ninja War and consume the chakra fruit to become an immortal. Victor would have the employees of his medical company experimented on and used as sacrifices to empower the tree. At one point, Victor got into contact with Boruto, Mitsuki, Sarada, Konohamaru, and Mugino, to help him look for an employee whose gone missing. Unbeknownst to Team 7 and Mugino, the employee was one of the individuals who went berserk from one of Victor’s experiments. As Team 7 tried to retrieve the Hashirama cell from the Haze Quadruplets, Victor appeared and ordered Deepa to kill Boruto, Sarada, and Mitsuki and to take the Hashirama cell. Victor fought against Konohamaru and Mugino. Victor regrouped with Deepa after the latter retrieved the Hashirama cell. Victor ordered Deepa to retrieve one of Urashiki Ōtsutsuki's puppets in the Land of Wind as there is an important component he would need for his master plan.

Victor later met with Konohamaru and Mugino where the two Leaf ninjas tried to interrogate Victor. But, Victor told them to leave. Victor later met with a daimyo to try and show him what his company is doing and to try and manipulate him with a genjutsu. However, Konohamaru and Mugino disguised as the daimyo’s bodyguards released the daimyo from Victor's illusion technique. Victor manipulated the god tree to attack Konohamaru and Mugino as the tree was maturing. Victor met with the rest of his employees to tell them that their life force would now belong to him. He unleashed the god tree on his employees by having all of them ensnared within it. Konohamaru encountered Victor and the two fought. Victor began using new techniques from the people who were ensnared in the god tree. Orochimaru appeared and fought Victor. He told Victor that he needed to return the Hashirama cell that he stole from him, but he refused. When Mia confronts Victor on his manipulations and schemes, Victor stated that his employees were simply pawns he used to gain power for himself. As Victor waited for the tree to give him a chakra fruit, the tree attacked Victor and ensnared him much to his shock. Soon afterwards, Orochimaru sealed the tree and surmised that the tree was failed replica.

Victor survived the god tree attack and escaped. He immediately came up with a lie to Jigen about the Land of the Valley incident being all Deepa's idea. He plotted to try and steal the vessel from Jigen to gain some advantage over him due to the precarious situation Victor was in. Victor faked a seizure in front of Amado to try and get him out of the room so that he can get data on the vessel and the ship carrying it. Victor also volunteered to help Jigen and Amado with transporting the vessel, but Amado stated that Victor was to not be on the ship itself. Victor monitored the ships progress but was shocked from the error reports he was receiving. He later attended a meeting by Jigen to hear that the vessel went missing. Victor tried to push any blame the members were throwing at him off of him. When the meeting ended, Victor tried to continue his plans, but Koji Kashin confronted Victor on the new information of his treachery. Victor tried to lie his way out of the situation, but Koji Kashin burned him to death under Jigen's orders. 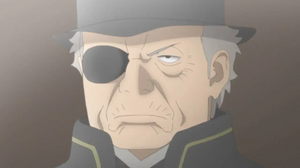