Doing the The Operator's dark work.

Kill people for the The Operator.

Bring back his deceased wife.

Victor is a recurring antagonist in the Slenderverse.

He is also one of the few major antagonists in the entire Slenderverse.

He is the protagonist villain in the series. According to comments left by Victor and the obscure details in his videos, Victor's wife was brutally murdered during the holocaust, causing him to make a deal with the Slender Man in exchange for eternal servitude, that the Slender Man takes revenge against the Nazi camp and brings his wife, Geneva, back from the dead.

On the channel, the first few videos are strange and horrifying messages are uploaded, consisting of elements of both gore and religion. These messages eventually lead up to his role in TheBoneCreekStory. Eventually, he is shown committing horrifying actions while brainwashed. There are some points where he tries to break free of the Slender Man's control, even to the point where he grabs a gun about to shoot himself in OBEY.

With the help of an undead Geneva, now going by The Oracle of Lies, they kidnap and brutally murder Tim's friend, Rob. Afterwards, they finally convert Tim into a proxy only known as Mr. Flip, who's alignment remains unknown.

He is the true main antagonist in CompileTRUTH, where he is shown and implicated to be apparently stalking Dr. Cairo Zephlest.

He is one of the main antagonists in OsirisChronicles, where he may have died at one point by being killed by the Slender Man himself, but was resurrected by The Oracle.

He is the secondary antagonist in Future Refused to Change, appearing in the video Phantom Call as the main antagonist. The main protagonist of the series, Stack appears in two videos on MyDarkJournal.

Just like Future Refused to Change, he is also a secondary antagonist. The main protagonist Mark discovers OsirisChronicles and recognizes himself struggling with Victor during the opening moments of the fight in The Invasion. He has no idea of the identity of any of the people involved.

He is an unseen antagonist in CloverinChicago, however, he kidnaps Clover and forces her to read Victor's journal, which he wrote before he was brought into the concentration camp. According to the story, Victor had a daughter named Cassandra, and Geneva's gypsy had warned Victor and his family about an entity known as Der Chirurg. The story also states that the Nazis "paved the way" for Der Chirurg's arrival. The story ends by saying that Der Chirurg had planned experiments for their children, as the camera pans away to the Slender Man onlooking.

Clover then updates her channel a while later, saying she doesn not remember much and that she was put into a witness protection program of some sort. 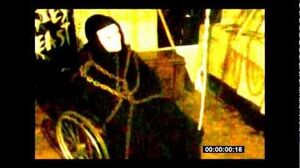