Being a wizard
Being given a chance

Victor Delgado is the husband of Ash Delgado and the father of Carla Delgado. He is one of the main antagonists of Elena of Avalor.

He is voiced by Lou Diamond Phillips.

Victor has black slicked-back hair with sideburns along with a mustache and hair under his lip and chin. He also has green eyes and tan skin. He wears a green vest with gold accents and buttons and a gray jacket over it along with dark purple pants. However, once he is turned into a Malvago, his outfit changes into a purple robe with a black scorpion design and a black robe with two gray scorpions on it.

Victor is an extremely ruthless, cruel, and selfish man who always makes trouble everywhere he goes. As noted by Francisco and Luisa, he's been a thief since he was a boy. He freely betrays anyone for the sake of his own personal gain as shown when he betrayed everyone in Avalor including his own father to help Shuriki gain power so she would name him Chancellor of Avalor. He's also shown to feel no guilt or shame about the harm he causes to fulfill his desires as shown when he was only upset that Shuriki banished him from the Kingdom and instead made Esteban Chancellor. For all his ambition and ruthlessness however, Victor loves his daughter dearly, carrying her through a blizzard after she hurt her leg all the way to their cottage to get her warm and safe. His main weakness is his ego as he can be tricked into making a wrong move by his enemies when they rub it the wrong way.

His reunion with his wife, Ash, is bitter though they hide their discontent with each other from Carla, as Victor is angry at Ash for not returning to him and their daughter when Ash was only supposed to be gone a year, and the fact she never contacted them led Victor to think Ash was dead, and he is aggravated how Ash excuses her actions and turns the argument around on him as she is angry that Victor raised their daughter without her. Though they come to an understanding and seem to make up, it quickly dissolves after Ash is dismissive of Victor's abilities as a Malvago compared to Carla. When Carla nearly falls to her death, Victor decides that the two of them need to end their dark pursuits because they have endangered Carla, once again showing how much he cares about his daughter to the point of giving up his desires if it means keeping her safe. Unfortunately, Ash responds to this by turning him into stone.

Victor is afraid of thunderstorms, as he fearfully clutches Carla in his arms when Hetz conjures one.

During King Raul's reign, Victor's father was the Royal Treasurer of Avalor. He and Chancellor Esteban would often race through the palace and Esteban would always finish second for which Victor nicknamed him El Segundo. 41 years ago, Victor and Esteban made a deal with an evil power-hungry sorceress named Shuriki: They would help her invade Avalor if she gave them power after she took over. However after she took over, Shuriki had Victor and his family banished from Avalor and made Esteban Chancellor. He later married a woman named Ash and they had a daughter named Carla. Ash later left to become a Malvago. Five years later, a severely weakened Shuriki came to Victor following her defeat at the hands of Princess Elena and Princess Sofia and renewed her alliance with him by promising to make him and Carla Dark Wizards in exchange for helping her regain her youth and powers.

Victor first appears in "King of the Carnaval" when he and his daughter Carla arrive at Avalor Palace. After Elena shows him the Royal Treasury and Carla steals the key from a sentry, Victor tries to steal the Crown Jewels but is stopped by the booby traps inside. Once back outside, He blackmails Esteban into helping him rob the Royal Treasury of Avalor by threatening to tell the Royal Family and the whole kingdom he helped Shuriki invade Avalor if he refuses. However, it's Elena that comes back out with the jewels. When Esteban comes back out, he explains Elena caught him and he had to give her the jewels to cover himself. Victor tells him to get the jewels back with their old sleight of hand tricks or he'll spill the beans about what he did to his family. To ensure that Esteban succeeds, Victor takes control of the float and gives the Royal Family a bumpy ride. When Esteban comes back with the jewels, Victor sees that Esteban didn't take back Queen Lucia's tiara. Esteban tells him that that's because Elena's wearing it and he'll be seen. Victor orders Carla to get rid of the others and take the tiara. Esteban tells him he has enough jewels to which Victor retorts "The tiara is the only piece that matters. We're not leaving without it." To which Esteban bites back "Then you are not leaving at all!" and stops the coach. Furious, Victor drops the bomb about Esteban's betrayal to Elena. After Carla steals the tiara, Victor imprisons Elena and Esteban. However, Victor and Carla are stopped by the Carnaval Parade long enough for Elena and Esteban to instigate a chase. Victor and Carla are soon apprehended by Elena, her family, and her subjects. Elena banishes Victor and Carla forever. However, Victor vows to return for the tiara and get revenge.

He and Carla return in the special, “Realm of the Jaquins”. They interfere in Nico's guardian test, in order to get him sent back to the Jaquin realm of Vallestrella, allowing them to follow him and gain access. They do not manage to get into the portal before it closes but are given another chance when Elena and Luna use the portal to go and speak to King Verago and manage to make it through. Once there, they journey to a mountain location, using a map that was given to Victor by an old friend of his, and free a forest sprite named Marimonda to aid them in taking over Avalor.

Later, the two wrecks a trap Elena sets and reveal that they are behind Marimonda's release. Marimonda uses Migs to open the gate and the three of them go back to Avalor. However, unbeknownst to everyone, releasing Marimonda to invade Avalor was just a distraction and Victor and Carla's real plan was to give the magic jewel they removed to free Marimonda to his old friend: Shuriki. Shuriki uses the jewel's magic to restore her youth and promises to make the pair malvagos so they can conquer Avalor together.

Vìctor and Carla are turned into malvagos by Fiero in "The Race for the Realm" and continue to serve Shuriki until her death in "Song of the Sirenas". In "Snow Place Like Home", they, along with Cruz and Vestia have been on the run from the Royal Guard. After Victor mistreated the rogue jaquins one too many times, they ditch him and Carla in the storm he accidentally created. They are later reunited with Carla's mother Ash Delgado, though Victor is initially upset at her for not coming back to him and Carla for seven years, they make amends after Victor reveals that he has the Scepter of Night's jewel.

In "Naomi Knows Best", Victor, Ash, and Carla set up a trap for Elena by having a brainwashed King Joaquín write a forged letter to her, lying that Victor and Carla have been captured in his kingdom. Once Elena arrives there with Esteban and Mateo, Ash reveals herself and imprisons Esteban, Mateo, and Joaquín in a cell. She and her family plan to extract the magic inside Elena into the Scepter of Night's jewel, which will kill her, and use a spell on Elena that forces her to go with them. By sunset, Gabe and Naomi ambush them, but Ash is easily able to defeat them and plans to have Carla perform the magical spell with her, as she is a more powerful malvago than Victor, much to Victor's frustration, whom Ash entrusts with guarding the cells.

Though Victor initially does a good job in guarding the cells, Naomi is easily able to outsmart him and tricks him into unintentionally freeing Esteban and Mateo. He has his tamborita taken from him, and Naomi has Esteban and Joaquín keep an eye on him while she, Mateo, and Gabe confront Ash and Carla. While they succeed in foiling Ash and Carla's plans, the latter two manage to escape and plan to come back for Victor eventually. The next morning, Victor is lead on board Elena's ship to be imprisoned in Avalor Palace for his crimes.

In "Sister of Invention", an imprisoned Victor refuses to tell Elena anything, and expresses shock when she mentions the Delgado's cabin. Later, in "To Save a Sunbird", Carla is locked up in the same cell as him when she fails to rescue him. Though she believes she failed him, Victor assures her that it's the fact that they're together that's important. He is hopeful that Ash will soon rescue him and Carla, unaware that she is actually on her way to Takaina so she can obtain powerful magic.

In "The Magic Within", after Ash is arrested, Elena comments that now all of Avalor’s enemies have been dealt with, causing Victor to remark that Esteban should be in with them. Naturally, Elena doesn’t believe him and Esteban taunts him over it, though Victor tells him that the truth always has a way of coming out. Sure enough, Elena and the others soon learn of Esteban's betrayal over 40 years ago and have him arrested, which Victor and the other Delgados mock him for. When Esteban tricks Private Guard Higgins into giving him the key, Ash convinces Esteban to free them as well. Once Esteban gets their tambouritas back, they almost turn on him, but Esteban convinces them that they need him just as much as he needs them, so they all escape together. However, during the escape, Carla nearly falls to her death, so Victor decides that he is done with his dark pursuits, not wanting to put Carla in danger anymore. But when he tells Ash this, she doesn’t agree and turns him to stone. 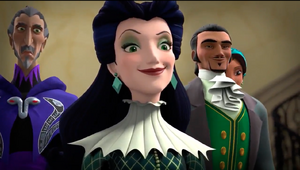 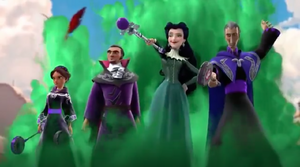 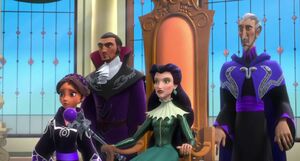 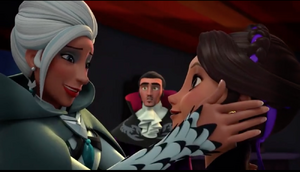 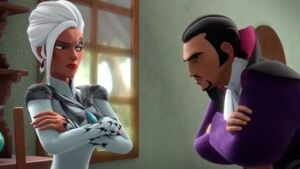 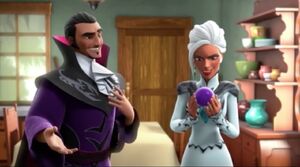 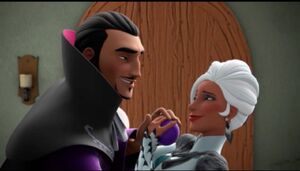 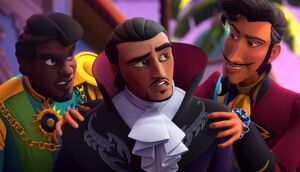 Victor gets arrested by Esteban and Joaquin. 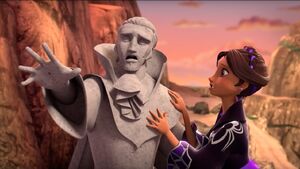 Victor turned to stone by Ash, to Carla's horror. 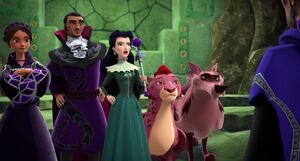 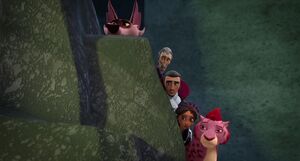 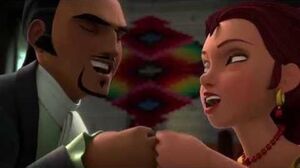 Retrieved from "https://villains.fandom.com/wiki/Victor_Delgado?oldid=3985738"
Community content is available under CC-BY-SA unless otherwise noted.