Obtaining bionics and upgrading himself.

Expose the bionic abilities of Adam and his friends to the world (succeeded).
Destroy Adam and Bree and Chase.
Kill Douglas for his betrayal.
Kill Leo and create a bionic army to take over the world and wipe out all of humanity and rule over a new bionic civilization on Earth.
Kill Donald Davenport and build evil bionic soldiers for his own army (all failed).

He was a corrupt billionaire who joined forces with Donald Davenport's brother Douglas Davenport. In exchange for funding Douglas' schemes, Douglas bionically enhanced Victor, making him superhumanly powerful. After he was defeated by the Lab Rats, he was replaced by Giselle Vickers, Douglas's former colleague and ex-girlfriend.

He was portrayed by Graham Shiels.

After Douglas was thrown out of Davenport Industries, Douglas found Krane who agreed to fund his plans, but only if Douglas shared his research so he implanted bionics in him to make him powerful. He broke into Donald's far off warehouse and rescued his partner beating Donald's guards.

Later after Douglas tricked Adam, Bree and Chase into following him to his new lair, Victor incapacitated them with his electroblast. Upon waking up, Douglas revealed his new partner's name and history, Victor urged Douglas to carry on his plan, but Douglas was more relaxed about the affair. Later after Adam, Bree and Chase escaped, Victor angrily criticized him, however Douglas revealed it was part of his plan, as he had already uploaded the Triton app again, letting him take remote control of them. He waited till they got home, before taking control and turning them on Douglas, Tasha and Leo. Victor urged him to kill them, but Douglas was having to much fun terrifying his family.

Leo and Donald managed to break Douglas's control over Chase, as such Douglas turned Adam and Bree on him. Angry at the plan not working, Victor grabbed the controls and started turning the attempts lethal, trying to kill Chase. However the plan failed, and Chase managed to override the Triton app freeing his siblings. Angry at the plan failing, Douglas reassured Victor that he could take control again. But having enough of his plans, Victor declared they were now doing his, and they were going to kill them all. This left even Douglas stunned.

Later Krane had become considerably more mentally unhinged when he enhanced his powers to much greater levels, so much so that even Douglas was scared. Fearing where Krane was heading, he betrayed Krane and tried to warn the Donald, Adam, Bree, Chase and Leo, however they didn't trust him. Krane later decided he didn't need Douglas and ended their partnership, then he seemingly killed him by suffocating the air from his lungs. Afterwards he kidnapped Leo and Tasha, imprisoning them in a death trap and demanding Adam, Bree and Chase or he would kill them. Donald went himself and confronted Krane with a powerful weapon, although originally working, Krane managed to absorb all the power and defeat them. He tried to force Donald, but he refused to choose.

Meanwhile, Adam, Bree and Chase managed to disable the defenses to go and help, but being warned of this, Krane teleported into the lab and confronted them. A fight broke out between them, with Krane holding the advantage, but with difficulty they knocked him back. However Krane retook the advantage by telekinetically slamming them to the ground. He was about to kill them when he was shot at by Douglas, having really faked his death to fool Krane, saving the kids. Krane managed to again regain the upper hand and tried to kill Douglas with a plasma blast, but Chase jumped in front of him, and using his force field reflected the blast back at Krane. Holding him at gunpoint, Douglas was about to kill Krane when Donald returned having saved Tasha and Leo, distracting everyone for a moment while Krane escaped to parts unknown.

Then Krane began his next plan, he grew S-1 in his lab and gave her bionics, to make her his bionic soldier, using an updated version of the Triton app he could control her with his mind. He then used her in his plan to remove Adam, Bree and Chase by staging a gas pipe rupture and sending her to film them. Then leaking the footage to the world revealing that humans with bionics existed. Following his plan being well underway, with the FBI capturing Donald, Tasha, Adam, Bree and Chase, he went to confront Douglas and Leo who had escape and were hiding out with Principal Perry at the school, he brought S-1 with him. There he confronted them, only for Perry to pull the fire alarm, as such Krane electrocuted her and Douglas believing he had killed them and sicced S-1 on Leo, instructing her to kill him in a painful way. She did by causing the ceiling to break above him, causing a giant concrete block to fall on him, apparently killing him. Then they left together. However Leo survived, but the block only crushed his arm.

Douglas took Leo from the hospital to Krane's abandoned lab, where he bionically enhanced Leo's arm, to save it. However Krane and S-1 found them again, Krane took Douglas down with another energy blast, while S-1 defeated Leo. However before he could kill them, Donald, Adam, Bree and Chase arrived and confronted them. Krane knocked them all down with another energy blast and tried to telekinetically choke Donald, but recovering the others attacked. While Bree took on S-1, Adam and Chase attacked Krane. He managed to hold them off however and the fight was going in his favor, but interrupted when Leo accidentally hit him with an energy ball Douglas had given him. Defeated, the feds stormed in, but Douglas revealed Krane's evil plot to them. They went to take him, but recovering Krane tried to kill Special Agent Graham. However Bree saved him and Adam knocked him down again with an enhanced laser blast. Douglas gave the Feds several hand cuffs that would block there Bionic abilities and they were taken away. Later in a bionics-blocking cage, in a secret facility, S-1 asked Krane what they were going to do. However Krane told her not to worry, as although imprisoned he still had a plan, and with that he activated his secret army of bionic soldiers to further his plan.

By the time his bionic army rose, he had planned for them to control the satellite in order to control everyone in the entire world. He informs the group about his plan after demonstrating his power to control the president and having him type in the satellite's code. At the site, Victor had personally faced Donald and Douglas Davenport. Just when he had the upper-hand, Adam, Bree, and Chase unified their power together and blasted Victor away into space. This also caused his bionic army to (briefly) deactivate as well.

However, this was not the last of Krane, as his legacy would continue on in one form or another. One of his lead soldiers, Sebastian Krane found out about him from Chase Davenport and swore to continue Krane's evil legacy and avenge his defeat.

At the same time, Krane took Douglas's pet dog Otis, and gave him the directive to eliminate Douglas after Douglas turned on him.

Later, S-1 came to the island, prompting Douglas to scan her chip. It was revealed that Krane reprogrammed the Triton app to carry a virus which would mean that if anything happened to him, six months later all his bionic soldiers would die, as Krane's ego couldn't allow them to live any life that didn't serve him. Likewise as they had been affected by the Triton App, Adam, Bree and Chase were infected. Fortunately Douglas, Chase and Leo managed to find the answer, saving everyone's lives.

Contrary to what everyone thought, Krane survived, but barely. Krane crashed back down on Earth and sustained severe injuries. He came across a scientist named Dr. Gao, who saved his life and equipped him with a life support device. Dr. Gao became Krane's new partner, and plotted revenge against the Davenports. As Krane's soldiers were no longer his to control, Krane plotted to raise a new army. Krane returned in the episode Space Colony, and works with his new partner Dr. Gao to try and make a new bionic civilization. Krane sabotaged the dome surrounding Davenportia, and tampered with communications to distract the heroes. He revealed he used a cyber mask and cloak to infiltrate Davenportia as a participating colonist. Krane also gave Gao Douglas's research, which helped the mad doctor create a liquefied bionic serum which can turn a normal human bionic. Krane used the Triton App to place every colonist under his control, planning to turn them into his new bionic army. Although the samples containing the serum were destroyed, Krane made one last attempt to destroy the Lab Rats. Krane hijacked an escape pod, and fired at their ship. After a long dogfight, the bionic teens shoot a missile at Krane's spaceship, causing it to explode. However, Krane might have geo-leapt away at the moment the missile hit his ship, meaning there's still a chance that he survived.

Krane is a vile, egotistical, and power-hungry maniac who cares about nothing but power and domination. It is implied that he and Douglas had a somewhat cordial alliance at some point (as indicated by Douglas’s claim that they went as Brad and Angelina during one Halloween), but for the most part, he is an abusive traitor who doesn’t even care about his own children and isn’t above experimenting on them and ensuring that they all die if anything ever happens to him.

Krane has a marginally comedic disdain towards Perry, but outside of this, he is noticeably darker and more serious than every other villain in the show, even more so than Marcus and Douglas (before his redemption).

In the end, Krane was horrible enough to shake Douglas (who previously wanted to use bionic children as weapons to commit terrorism) to the core, cause him to rethink his own actions and reform. 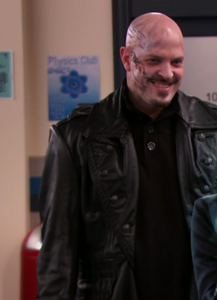 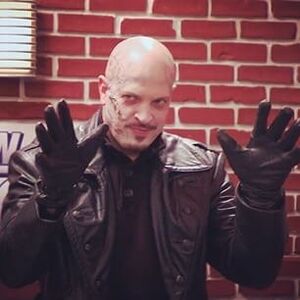