A Monster in Paris

Marry Lucille and kill Franceour at any cost (failed).

Victor Maynott, otherwise known as Commissioner Maynott, is the main antagonist of the 2011 American/French computer-animated film A Monster in Paris.

Victor Maynott is a greedy, pompous, arrogant, manipulative and wealthy police commissioner who was consumed by pride and ambition.

Maynott plotted to marry the beautiful singer named Lucille for himself, even if she doesn't want to. When projectionist Emile and inventor Raoul accidentally create a colossal flea via an explosion of a magic fertilizer, Maynott senses this as an opportunity for glory.

To that end, Maynott uses it in his plot to maintain fear in Paris and increase his chance of being elected in the upcoming mayoral elections in Paris. At the same time, he tries to seduce Lucille, with little luck. Raoul and Emile are captured and arrested for their involvement, but Maynott pardons them and gives them two Medals of Honor, as he desires to take down the creature.

Eventually, Lucille, Raoul, and Emile soon learned that giant flea is quite harmless in general, and Lucille named the flea Franceour, dressing him up as a guitarist to avoid any suspicion. However, Lucille's treacherous servant Albert overhears their conversation and leads Maynott to Lucille's dressing room where Franceour is hiding. Fortunately, Franceour is nowhere to be found, resulting an annoyed Maynott to arrest Albert for lying to the police and bearing false witnesses.

Knowing that Franceour cannot keep himself hiding in Paris, the trio decides to stage his death during the new railway inauguration hosted by Maynott himself in order to cover his escape. However, Maynott soon learns of the ruse after seeing that Franceour is hiding below the stage, realizing that he had been fooled. Having enough of this, Maynott angrily attempt to shoot down Franceour, who is forced to escape to the Eiffel Tower. During a battle on the Eiffel Tower, Maynott prepares to shoot Franceour at the top of the tower, but Emile knocks the gun out of his hands and Victor demands he give it to him. Maude, Emile's love interest, hits Maynott over the head with her umbrella, but the evil man catches her and prepares to throw her over the edge in exchange for his gun.

After the battle, the friends are safe, but the fertilizer wears off, reducing Francoeur to flea-sized once again, just as Maynott fires his gun, leaving Franceour's coat and hat to be left surfing in the air, much to everyone's shock. Delighted that he finally killed the 'monster' of Paris, Maynott laughs triumphantly, but is arrested by his fellow police officers, who all realized Maynott's true colors during the chase. Fortunately, Francoeur is still alive and was given another dose of the fertilizer to become large again to have a happy life with Lucille, Raoul and their friends. In a post-credits scene, Maynott is forced to endure off-key singing from Albert and an unnamed burglar in prison, much to his horror. 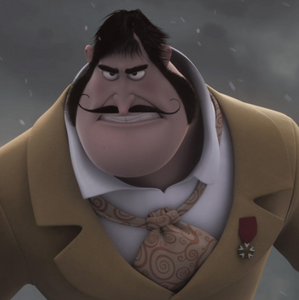 Victor Maynott's mad glare as he confronts Emile in order to reclaim his gun. 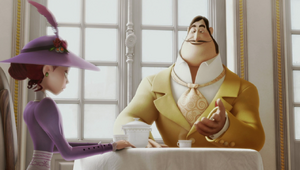 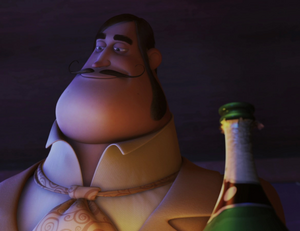 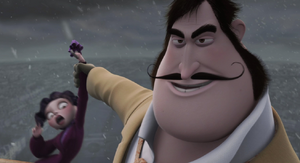 Victor Maynott threatening to drop Maude to her death if Emile doesn't hand him back his gun. 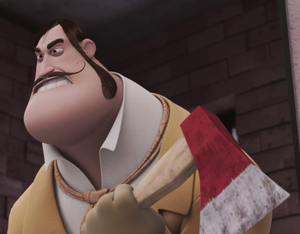 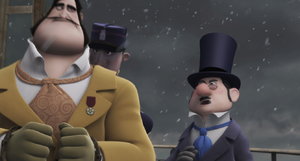 Victor Maynott's comeuppance and defeat
Add a photo to this gallery
Retrieved from "https://villains.fandom.com/wiki/Victor_Maynott?oldid=3708764"
Community content is available under CC-BY-SA unless otherwise noted.