Dealing with China, Iran and North Korea with his technologies.

Aiding the Federation.
Talking to Gabriel Rorke (not seen)

Assist the Federation armed forces to develop LOKI weapon satellite to use from Space on the US (succeeded).

End the war (succeeded indirectly).
Escape and evade capture the US Ghost Team.
Escape from the Federation tower before Rorke blows it up (both failed).

Victor H. Ramos is the secondary antagonist in the 2013 video game Call of Duty: Ghosts. He is a Latino (probably Argentine) scientist who joined the South American superstate known as the Federation in 2015.

He was voiced by Steve Wilcox, who also voiced Tubalcain Alhambra in Hellsing.

Ramos was born in Argentina in 1979. As a top ranked scientist, he had dealings with China, North Korea and Iran, eventually helping the USA to develop the weaponised space station known as ODIN to protect them from the Federation. After the Federation declared war on the USA, he joined the Federation under general Diego Almagro, and became a high-ranking member of the Federation's science division. After the Federation took over the ODIN Space Station only to have it destroyed, Ramos aided them in developing the LOKI Space Station, another version of the ODIN station with the same destructive capability. After Almagro's death, Ramos became a close friend of Gabriel T. Rorke, a former American soldier who was captured and brainwashed into joining the Federation following his capture at the site of Almagro's assassination.

Ramos appears in the mission "Federation Day", in which he is tracked to a building in Caracas, Venezuela, by Logan Walker, David Walker and Keegan P. Russ, three US soldiers who have been sent to discover from him where Rorke is. After killing several Federation guards, Keegan and Logan enter Ramos's office and are unable to find him. However, David then informs them that he found Ramos, and hurls him through the double doors on the other side of the office, before dragging him off the floor, forcing him into a chair and interrogating him with a gun to his head.

Although Ramos vehemently denies knowing where Rorke is, he eventually gives in and reveals that his location is in an encrypted file, on his laptop. However, when Keegan goes to decrypt the file, he's interrupted by a sudden transmission from Rorke, who reveals that he's planted a series of explosives in the building, as he knew they would come. He then detonates them, and Logan, David and Keegan run away whilst Ramos hides under the table to pray, resulting in his death when the building is destroyed. It's also possible for him to be shot by Logan while praying under the table. 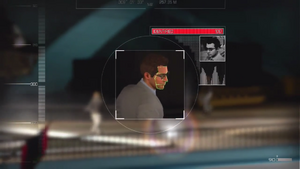 Ramos identified on the optic scanner. 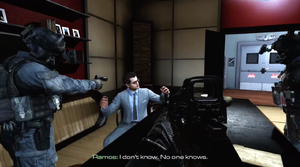 Ramos being interrogated by Keegan.