Villains Wiki
Register
Don't have an account?
Sign In
Advertisement
in: The Godfather Villains, Murderer, Arrogant,
and 15 more

Head of the Stracci Family.

Don Victor Stracci was the Boss of the Stracci family and a minor antagonist in The Godfather.

He was portrayed by Donny Costello in the film and Joe Paulino in the game.

Don Victor Stracci was an old-fashioned Don from Staten Island, Victor had strong views on prostitution, believing it to be an immoral price.

Victor began his businesses in the early 1930s, posing as a legitimate hauling company in New Jersey with his brother Mario, before eventually spreading out to become the leader of one of Five Families. While a peace-loving individual, his brutality during business and other necessary occasions led to him becoming famous, one of two men given the soubriquet "The Butcher of New Jersey" the other being Fabio Satriani.

He was present at the wedding of Connie Corleone and Carlo Rizzi sitting at the same table with the other heads of the families.

Role in the war

Victor embraced the scheme of Don Emilio Barzini to unite against the Corleone Family and force them into the heroin trade. He was present at the sitdown where the families convinced Don Vito Corleone to accept drug trafficking in his territory and guarantee peace. His family was seen as the weakest of Corleone's enemies at this point, due to his ally Philip Tattaglia's alliance with Barzini.

On the day of Michael Corleone's revenge, Victor was on his way to a peace meeting. He and his bodyguard were exiting an elevator when they run into Michael's caporegime Peter Clemenza, one of the top enforcers of the Corleone family, who was about to enter the elevator. Clemenza revealed a Lupara shotgun, hidden in a flower case, and proceeded to kill them both. 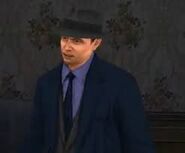 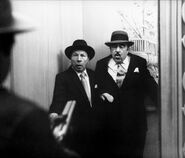 Stracci and his bodyguard meet their demise at the hands of Peter Clemenza.