Become the most powerful drug lord in Vice City.

Kill Sergeant Jerry Martinez and the Mendez Brothers for the death of the Louise.

Victor Vance is the main playable protagonist in Grand Theft Auto: Vice City Stories. He is the older brother of Lance Vance and Pete Vance.

Victor was a military corporal stationed in Fort Baxter in Vice City to pay for Pete's medical bills. He was discharged from duty when drugs were found in his barracks and brought a prostitute which were ordered by his superior Sergeant Martinez. Realizing that he has been tricked, Victor does various jobs and becomes a rising drug lord.

He also met a woman named Louise and falls in love with her but she was killed by the Mendez brothers when they tried to take over Vance's empire. Victor avenges Louise by destroying the Mendez Building in the Downtown area of Vice City and killing Diego Mendez and Jerry Martinez.

Two years later, he engages in a drug deal with Tommy Vercetti. All was well until Ricardo Diaz's men ambushed them and killed Victor. Lance manages to avenge Vic by killing Diaz with the help of Tommy. 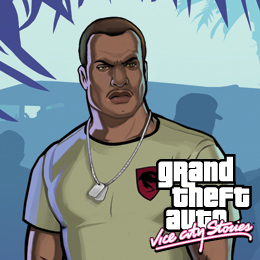 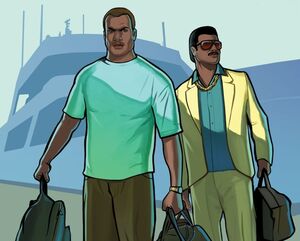 Victor with his brother Lance 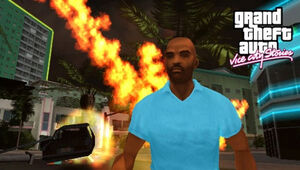 Retrieved from "https://villains.fandom.com/wiki/Victor_Vance?oldid=3273799"
Community content is available under CC-BY-SA unless otherwise noted.