Victor "Vic" Vega, better known as Mr. Blonde, is one of the two secondary antagonists (along with Eddie Cabot) of Quentin Tarantino's 1992 directorial debut film Reservoir Dogs. He is also a playable character in the 2006 Reservoir Dogs video game adaptation and Reservoir Dogs: Bloody Days.

He is a sadistic mobster and professional thief who works for crime boss Joe Cabot and his son Eddie, being tasked to torture the police officer Marvin Nash after a heist goes wrong. He is also the brother of Vincent Vega from Tarantino's later film Pulp Fiction.

He was portrayed by Michael Madsen, who also played James Alexander in L.A.P.D.: To Protect and to Serve, Toni Cipriani in Grand Theft Auto III, Budd in Kill Bill, Maugrim in The Chronicles of Narnia: The Lion, the Witch and the Wardrobe, Michael O'Leary in Call of Duty: Black Ops II, William Carver in Telltale's The Walking Dead and Grouch Douglas in The Hateful Eight.

Vic "Mr. Blonde" Vega, is reticent and very calm, only speaking when he is spoken to. Beneath his smooth, calm exterior, however, he is a psychopath who takes pleasure in torturing and killing people, as expressed when he tortures Nash while dancing around.

It's even stated by Eddie that while he was in prison, he raped other inmates. Vic has no measure of humanity whatsoever, as he says of the people he shot in the bank, "They set off the alarm, so they deserved what they got".

The only member of the crew who sees through Mr. Blonde's charm is Mr. White, who calls him a "psycho" and a "murdering bastard". Mr. Blonde is however loyal to Joe and to Eddie, having refused to inform on either of them in prison.

In the film, he pays a visit to crime lord and old friend Joe Cabot after serving four years in prison (during which he refused to inform on his partners or make any deals, as proof of his loyalty). By suggestion of Joe's son, "Nice Guy" Eddie, he is recruited for an upcoming jewelry heist. He is on parole and living at a halfway house and has a 10 o'clock curfew. He dislikes his parole officer Seymour Scagnetti, who was formerly a parole officer for Nice Guy Eddie. Nice Guy Eddie is given a "no show" job as a foreman for the dockworkers' union in Long Beach, California. Nice Guy considers Vic a "rabbit's foot" and nothing but good luck.

Blonde's role in the heist was crowd control along with Blue. The job goes terribly wrong, however, when the store clerk sets off the alarm; in retaliation, Blonde shoots and kills several employees and customers, horrifying his fellow robbers (especially Misters Pink and White). The police show up, resulting in a shoot-up in which Misters Blue and Brown are killed, and Mr. Orange, secretly an undercover cop, is severely wounded.

Vega manages to escape, and captures police officer Marvin Nash, whom he later takes to a warehouse where the surviving criminals regroup and try to determine what went wrong. After trying to beat the truth out of Nash with little success, Pink and White are picked up by Eddie to retrieve the diamonds that Pink hid away, leaving Mr. Blonde in charge of the officer and Mr. Orange.

Once he is alone with Nash, Mr. Blonde shows his true colors by savagely torturing the young cop to the song "Stuck in the Middle with You", slashing his face with a barber blade and hacking off his ear. Mr. Blonde mocks Nash by talking into his severed ear, and then douses him with gasoline. However, before he can set Nash on fire, Mr. Blonde is shot to death by Mr. Orange.

Mr. Blonde is a playable character for 3 missions in the Reservoir Dogs video game adaption released in 2006. He is again voiced by Michael Madsen, who is the only actor from the movie to give his likeness and voice to the game.

The game depicts what Mr. Blonde was up to after the heist went wrong. A mission involves him escaping through a shopping mall, and taking the cop Marvin Nash hostage. Another mission has Mr. Blonde being chased by the cops with Marvin in the trunk of his car and he must not slow down to avoid Marvin escaping. His final mission takes place shortly after the heist before making his way through the streets to the mall.

His "signature move" in the game (a method used to make all police surrender) is cutting off a hostage's ear , which is a reference to the infamous ear cutting scene from the movie.

When entering a "bullet festival, Mr. Blonde puts on a pair of sunglasses.

Mr. Blonde makes an appearance in the game Payday 2 he appears in the Reservoir Dogs Heist, where he was shown to be with the Payday Gang, as shown in day 1 of the heist (Garnet Group Boutique), him, Mr. Brown, Mr. Pink and the gang were in a store of the same name to meet Cabot's men, however Mr. Brown walks past an window and was shot dead by a sniper, Blonde runs to his car and Pink runs elsewhere while the LAPD raids the store. In day 2 (Highland Mortuary), Mr. Blonde is shown torturing a policeman (who was the same officer who was shown in the trunk of day 1, possibly Nash), however the LAPD found the location of the hideout and raided it, Mr. Blonde brings the officer and then hides, after bringing Mr. Pink to safety, Blonde tells the gang that he hid some of the diamonds that was stolen from what is possibly the same store from day 1, after the bags are secured the gang escapes.

Mr. Blonde (left) looking at Officer Marvin Nash in the trunk of his car. 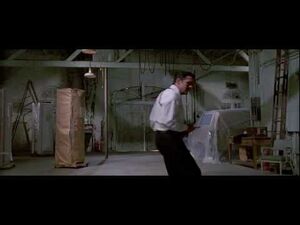 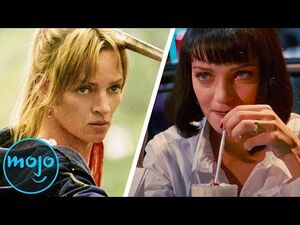 How the Tarantino Movies are Connected