Victor Von Ion is the secondary antagonist of PlayStation's 2016 film Ratchet and Clank and its tie-in video game on PlayStation 4. He is Chairman Drek's right-hand man and the arch-enemy of Clank.

In the movie, he was voiced by Sylvester Stallone, who also played Jack Carter in the 2000 Get Carter remake, Toymaker in Spy Kids 3D: Game Over and King Shark in The Suicide Squad. While in the game version, he was voiced by Mark Silverman.

Victor was first seen on the Deplanetizer, enforcing Drek's plans with other blarg. Drek planned to wipe out Captain Qwark's Galactic Rangers to stop them from interfering his plans, Victor questioned how are they're gonna stop them with no army. As such, Drek take him to the warbot army created by Dr. Nefarious, which would be used to invade Kerwan and to defeat the rangers. During the demonstration however, there was a defect among the warbots, which was Clank, Drek then ordered Victor destroy it, though Clank managed to escape. Victor then used his Negotiator cannon to shoot down Clank's ship, but only caused it to crash on Veldin.

Victor later led Drek's army to assault the Hall of Heroes, though forced to retreat after Ratchet and Clank managed to destroy the army's dropship. When the Galactic Rangers attacked the Deplanetizer, Drek sent Victor to destroy them with his new gunship, though Ratchet destroyed it in a dogfight. Victor later assaults Starship Phoenix to destroy Clank, but he eventually get himself killed by the fire suppression system.

Although Victor's funeral was held on the Deplanetizer, Drek ejected all the blarg out of the station for playing on their phones. 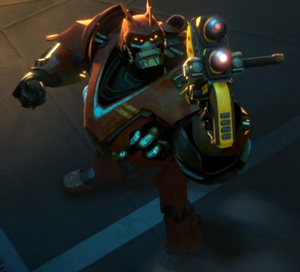 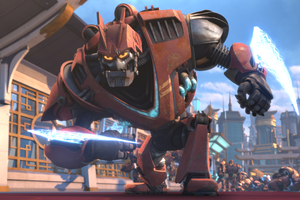 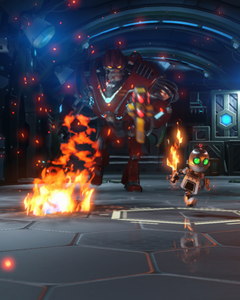 Victor chasing Clank in the game.

Victor's defeat in the game.