Kill as many people to satisfy himself, kill Batman

Victor Zsasz is a villain from the Batman series. He is a deranged serial killer convinced that life is meaningless, and that by killing his victims he is in fact saving them from their meaningless existence. He tracks his number of kills by carving a tally mark into his flesh for each one, saving a spot for Batman.

At the age of 25, Victor Zsaz was the CEO of an international company, ammasing much personal wealth in addition to inheriting his family's fortune. His life took a turn for the worse when his parents died in a boating accident, sending him into a deep depression. Zsaz developed a gambling addiction, losing money in tournaments across the world, eventually losing everything he owned to the Penguin at Gotham City's Iceberg Lounge. Feeling that his life was now empty and meaningless, Zsaz went to Gotham Bridge to commit suicide, where he was attacked by a homeless man when he refused to give him money. Acting on instinct, Zsaz grabbed his attacker's knife and saw in the man's eyes that all life was meaningless, and that nothing or anyone mattered.

After stabbing the man as a "gift" for saving his life, Zsaz decided to "liberate" others of their meaningless existence. While he primarily targets young women, he has no qualms over who he murders, and often slits their throats before leaving them in lifelike poses. He is diagnosed as insane as has frequently been incarcerated at Arkham Asylum courtesy of Batman, but often breaks out in order to resume his killing spree.

Zsasz appears as a villain in the Arkhamverse video games, physically appearing in both Arkham Asylum and Arkham City. In Arkham Asylum, Zsasz is the first real villain that Batman will actually encounter after Joker escapes. He takes a Arkham Asylum guard hostage, threatening to murder him on an electric chair, and is taken down by Batman. Later, Zsasz is ordered to get doctor Penelope Young to give up her research notes and has to be taken down by Batman once more.

In Arkham City, Zsasz appears in one of the Side missions. He calls a random phone somewhere in Arkham City, waiting for Batman to pick up the phone. He then forces Batman to rush through Arkham City in order to find another ringing phone, threatening to murder a hostage if Batman does not hurry. After Batman manages to trac down Zsasz, he defeats Zsasz in his own headquarter and locks him up in one of his own cages.

Victor Zsasz made a very small appearance as a minor villain in the Live Action Movie; Batman Begins. In the movie he was refered as Victor Zsaz and was protrayed by Tim Booth.

Gotham's Assistant District Attorney, Rachel Dawes states that Zsasz butchers citizens for the mob and is one of Carmine Falcone's thugs. Dr. Jonathan Crane testified in court that Victor Zsasz, one of Falcone's assassins, was legally insane and should be moved to Arkham for rehabilitation.

Zsasz would later be released from Arkham, during Ra's Al Ghul and Scarecrow's reign of terror. While trying to escape, he and other escaped prisoners almost attacked Rachel and a young child. the two of them were rescued by Batman from Zsasz and the others. It was later confirmed that Zsasz is still at large.

In the Telltale video game, Zsasz appears as an inmate at Arkham Asylum. While Bruce is incarcerated there after brutally beating Oswald Cobblepot, he can witness Zsasz playing a board game with Arnold Wesker. John Doe later scratches Zsasz with a knife, creating a tally mark on his body before he's killed someone, driving him into a rage and causing him to attempt to kill another inmate and start a riot that would allow Bruce to use the phone. Depending on the player's choice, Zsasz will either succeed in killing the inmate or be stopped from doing so by Bruce.

When Lady Arkham later storms the asylum and frees all inmates, Zsasz is released as well. When Batman arrives and attacks Lady Arkham, he is briefly attacked by Zsasz. Zsasz is detained when Detective Gordon shoots him into the hand, disarming him, and then beaten up by both Batman and Gordon.

Zsasz makes a brief appearance during the intro of Injustice 2 during Bruce Wayne's interview about the fall of Superman. Batman and Robin (Damian Wayne) head to Arkham Asylum, where Zsasz is incarcarated, in order to stop Superman from executing all inmates after the death of Lois Lane. There, after Batman manages to best Superman in a fight, Damian appears in the room, holding a knife to the throat of Zsasz. Damian reveals that he believes in Superman's motives and violently asks Zsasz how many women he killed. Zsasz nervously answers that he killed 122 women thus far. Claiming that this sounds very irredemable to him, Robin then cuts Zsasz's throat, killing him.

Prior Injustice 2 in the first game's prequel comic, Zsasz was the one who murdered Alfred Pennyworth, in the same time Damian Wayne becomes the new Nightwing (a present from Dick Grayson's ghost himself, the current Deadman and the previous Nightwing). However, the second game's prequel timeline eventually retcons the first game's comic timeline, with Alfred's fate remaining unknown. 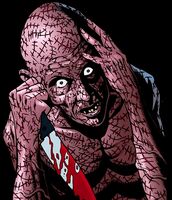 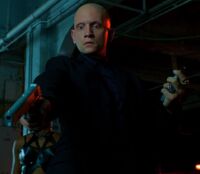 Zsasz in the TV show Gotham 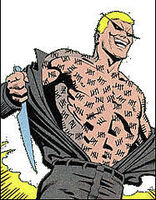 Zsasz presents all of his scars
Add a photo to this gallery
Retrieved from "https://villains.fandom.com/wiki/Victor_Zsasz?oldid=2455643"
Community content is available under CC-BY-SA unless otherwise noted.