Cutting himself for each kill he commits.
Calling random phones in Arkham City.

Make himself feel satisfied by killing others and cutting himself (both failed).

He was voiced by Danny Jacobs, who also voiced Frank Boles in the same series.

Zsasz was once a rich boy, but he lost his parents when he was young. All the money in the world couldn't bring his parents back, nor ease his pain. So to cope with the pain, Zsasz took on gambling, but he started to lose his money. After losing so much money, Zsasz devised an unknown plan to get his money back. He continued gambling Zsasz started to regain his money, to the point where he was able to gamble with others like Oswald Cobblepot, or what he considered, "a Disgusting Midget". Zsasz eventually gambled with the Penguin, and at first it appeared he would win as he had 4 sixes in his hands. However Penguin cheated as he had a three, a four, a five, a six and a seven in his hand. This resulted in Zsasz losing all of his money, and was kicked out of the Iceberg Lounge. Shortly after he lost all his money, and thinking of committing suicide, a nameless thug pointed a knife at him and demanded for his money. Without knowing, Zsasz grabbed the knife and rammed it into the thug's chest, instantly killing him. Zsasz said that plunging the knife into the thug felt good, but when the thug died, the feeling was gone. Before he knew it, Zsasz accidentally cut himself with the same knife, and that felt just as good, so in order to feel the enjoyment, Zsasz decided to kill anyone he encounters and cut himself for every kill.

Eventually, Zsasz encountered Batman. Batman managed to defeat Zsasz and was sent to Arkham. During his time in Arkham, Zsasz saw several doctors so he could be cured from his mental illness. One of the doctors was Dr. Sarah Cassidy. Dr. Cassidy had several interviews with Victor Zsasz, but she eventually grew more and more worried about him as he began threatening that she would be his next victim. Eventually, Zsasz was transferred to be a patient to Dr. Gretchen Whistler. One day, Zsasz managed to escape and went to find Dr. Cassidy. Dr. Whistler tried to warn Dr. Cassidy that Zsasz is on his way. However, before she could warn her, Zsasz arrived on her doorstep. After answering her door, Zsasz kidnapped Dr. Cassidy. He took her to the Old County Hospital. Just as he was about to kill her, Batman managed to arrive in time and rescued her from Zsasz. Zsasz was then arrested and sent back to Arkham.

In the videogame Batman: Arkham Asylum, Victor Zsasz is the first real villain that Batman will actually encounter after Joker escapes. He keeps an Arkham Asylum guard hostage in an electric chair, and Batman had to be stealthy and use the gargoyles around the electric chair and knock Zsasz down without being seen. Otherwise, he will kill the guard and the player will get a game over.

Later in the game, Victor Zsasz is ordered by Joker, to get Dr. Penelope Young to give up her research notes. He does this by threatening her with a knife, until the Batman comes to her rescue. What happened to Zsasz after being knocked out by Batman is unknown, but it is implied that if he was not recaptured that he escaped while Batman was fighting Quinn's goons who had arrived, as his body was not seen in the room during it. Later on in the game, after Batman is drugged by Scarecrow's fear toxin, Zsasz appears in Batman's hallucination. He is not seen again after this.

In some of the games' challenge modes, Zsasz is one of various thugs to be fought.

It was also implied that when Arkham City was opened, and all the inmates were transferred, Penguin managed to capture him and place him in a trophy stand. Zsasz managed to escape before Bruce Wayne was arrested and placed into Arkham City. He contacted The Broker in order to find a hideout in Arkham City in order to avoid the Arkham Gang War and continue his "holy mission" without interruptions.

Zsasz makes an appearance in Batman: Arkham City. He appears in one of the side missions. In Arkham City, Zsasz kidnaps several political prisoners. He then would call a random phone somewhere in Arkham City and wait for someone to pick it up. Then, he would threaten them that if they do not find another phone that is ringing in a certain amount of time, he would kill one, if not all, of the hostages. Batman does this several times, and every time he finds the phone that is ringing, he would track Zsasz's location while, at the same time, Zsasz tells him parts of his story of why he became the serial killer he is today.

After Batman manages to track down Zsasz, he takes him down, rescues the hostages, and locks him up in one of his own cages.

Zsasz makes a very brief appearance in the game on Batman's Bat-computer in the Clock Tower.

His profile in the video game Arkham Asylum states: A true sociopath, Zsasz grew up in a life of ease, but nonetheless, became a serial killer. Indiscriminate in his prey, body count is the only thing that matters to Zsasz. He takes pleasure in arranging the corpses of his victims in life-like poses before carving a mark for each of his victims into his own body. He is saving a special spot for the Batman. 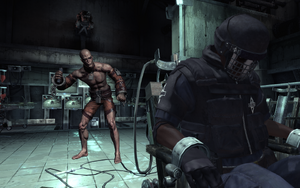 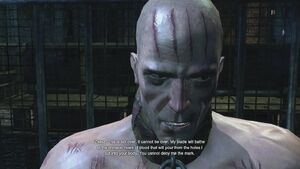 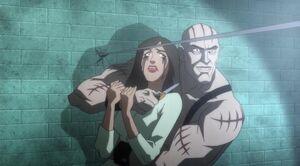 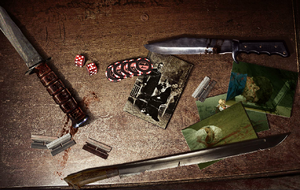 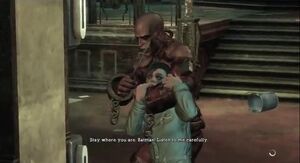 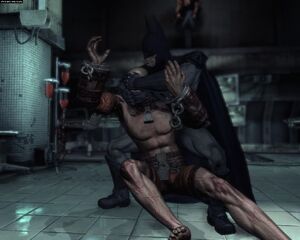 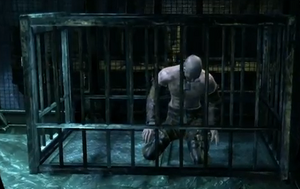 Zsasz imprisoned in his cell at his hideout in Arkham City by Batman. 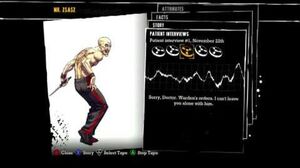 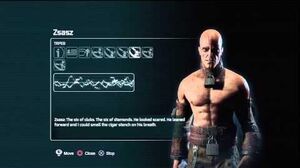 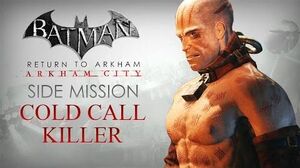