NOTE: This article is about the incarnation of Victor Zsasz from the DC Extended Universe. The mainstream version can be found here: Victor Zsasz.

Get the Bertinelli Diamond back from Cassandra Cain and kill her.

Victor Zsasz is the secondary antagonist of the 2020 DC Extended Universe film Birds of Prey (And the Fantabulous Emancipation of One Harley Quinn). He is the loyal but psychopathic right-hand man of ruthless crime lord Roman Sionis.

He was portrayed by Chris Messina.

After Harley Quinn splits from Roman's nemesis Joker, Sionis has her kidnapped and brought to his headquarters and wants her tortured by Zsasz, however they spare her when she offers to get a diamond that Sionis wants his hands on, which was stolen from Zsasz by a girl named Cassandra Cain. Although they let her go, Sionis orders Zsasz to text all their criminal contacts and put a bounty on Cassandra to get the diamond.

He was killed by Huntress who revealed that Zsasz is responsible for the death of her family. 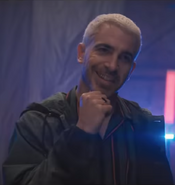 Retrieved from "https://villains.fandom.com/wiki/Victor_Zsasz_(DC_Extended_Universe)?oldid=3564618"
Community content is available under CC-BY-SA unless otherwise noted.