Victoria Argent is a recurring character and one of the minor antagonists on MTV's Teen Wolf in Season 2. She is the manipulative leader of the Werewolf Hunters, the wife of Chris Argent, the sister-in-law of Kate Argent, the daughter-in-law of Gerard Argent and the mother of the late Allison Argent.

She was portrayed by Eaddy Mays.

The Argent family men are Werewolf Hunters and the women are Leaders, as such, Victoria Argent was the Leader of the Hunters in the town of Beacon Hills, California but Gerard is the defacto leader.

Before moving to Beacon Hills, Victoria was a buyer at a boutique in San Francisco as well as a teacher at an all-boys school. While residing in Beacon Hills, she was a housewife and mother and an occasional substitute teacher at her daughter's high school.

When Victoria learned that her daughter was dating Scott McCall, a young man suspected of being a werewolf, Victoria initially seemed to tolerate the relationship, inviting the boy to dinner at her home and wanting only her daughter's happiness and safety. However, when homicides began occurring in Beacon Hills, Victoria feared the relationship would jeopardize her Allison's safety; the Argents forbade their daughter to continue to date Scott.

Later, Victoria discovered that the two were secretly dating; lying about the relationship, and having sexual intercourse. It was this revelation that pushed Victoria over the edge of reason. Her motivation was pure to protect her family; but her actions were extreme, quietly controlled rage flickering behind her eyes. She decided to kill the teen werewolf herself, making it look like an accident and using what she believed to be a more humane way than what the other Hunters would do. She reasoned that this would be the easiest circumstance for Allison to accept.

However, while in the process of killing Scott, Derek Hale, the Alpha Werewolf, heard Scott's howl of pain and came to rescue the young man. A fight ensued between Derek and Victoria, during which she stabbed him and he bit her savagely on the shoulder. This bite began to transform her into a werewolf and finally humanized the steely Victoria.

In the end, rather than transforming into a werewolf whom Victoria knew her husband would be honor-bound by the Hunters Code to kill, together Victoria and Chris plunged a large kitchen knife into her chest just as the full moon caused her turn. The devastating news of her mother's death caused Allison to embrace the role of hunter and seek revenge on all werewolves in Beacon Hills.

Victoria is a zealous, fanatical, vindictive, curmudgeonly, standoffish, and unstable woman who gives werewolves and humans alike no mercy, even the ones are completely innocent, although she shares Chris's restraint, she was immoral and dishonorable, she was overbearing and prone to fits of rage.

Victoria is not above torture to get what she wants in "Shape-Shifted", she electrocutes the principal of Beacon Hills High to have him resign so Gerard could take his place as part of a plan to keep an eye on Beacon Hills's werewolves. When she discovers that Scott and Allison are still seeing each other after she and Chris had forbidden them to; she tried to kill the former, simply because she doesn't want her daughter in a relationship with a werewolf, she had no guilt or remorse for this vile act of hers.

However, underneath her arrogance, Victoria is cowardly and pusillanimous, she tried to kill Derek, when the latter tried to rescue Scott, after realizing she can't beat him, she ran away like the coward she truly was, but she also gets bitten in the process, Victoria committed suicide (albeit with Chris's help) this shows that she would rather take the easy way out, then face the consequences of becoming a werewolf. 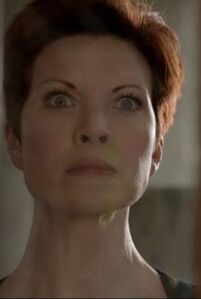