Kill Mitch Buchannon and his squad at any cost.

Smuggle and spread more and more drugs all over the entire USA in order to become the most powerful and the richest woman ever (all failed).

Victoria Leeds is the main antagonist of the 2017 action comedy film Baywatch, which based on the nostalgic TV series of the same name. She is a criminal mastermind, a drug smuggler and the owner of a night club called the Huntley, who is intent on spreading and smuggling drugs all over the US country.

She was portrayed by actress and model Priyanka Chopra.

Leeds is an extremely powerful, manipulative, cruel, selfish, sinister, egotistic, brutal, nefarious and highly tyrannical individual, who is seeing nothing more or less than completing her goals. Using her sexy and seductive physical appearance, Leeds is able to know how to act against her enemies.

Victoria Leeds was the owner of the Huntley Club, which she uses as a front to smuggle drugs. However, Victoria's main scheme involved real estate and she was shown bribing Councilman Rodriguez in her villainous quest. Later on, Victoria had her henchmen kill Rodriguez for his failure to comply, and she had the boat set on fire to cover up the murder.

The fire drew the attention of Mitch Buchannon's squad, who rescued a group of girls from the boat, while also finding Rodriguez's body. With Mitch and his group closing in, Victoria bribed Mitch's superior, Captain Thorne, to have Mitch fired and put in Matt Brody as the squad's lieutenant. All the while, she sent her henchmen to falsify Rodriguez's autopsy report, and also had Dave (a tech who was working for her) killed when he was attempting to blackmail her. After realizing that Mitch was correct about Victoria's schemes, Brody and the rest of the squad crashed a party thrown on Victoria's yacht, which is where Brody found a stash of drugs and was also revealed to have Chen, the last remaining threat to Victoria's plan to privatize the entire beach, held captive.

Victoria's henchmen knocked out Brody and locked him inside a cage, which the villainess pushed into the ocean in an attempt to kill him. After Brody was rescued by Mitch, they pursued Victoria, who attempted to escape in a helicopter, but her escape was thwarted by fireworks shot at the chopper by CJ and Ronnie. At that moment, the evil Victoria held Brody at gunpoint, threatening to kill him if Mitch came closer. Mitch, having intentionally stung himself with a sea urchin for adrenaline, fired a Roman candle at Leeds, killing her in a huge explosion. 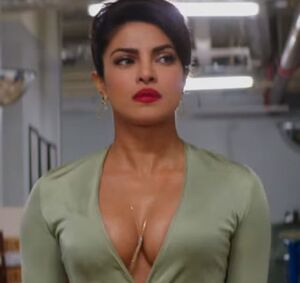 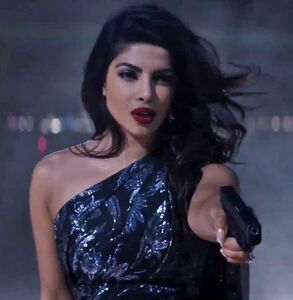 Add a photo to this gallery
Retrieved from "https://villains.fandom.com/wiki/Victoria_Leeds?oldid=3223203"
Community content is available under CC-BY-SA unless otherwise noted.