Kill Susan Raynor to prevent her from revealing Vought secrets to The Boys.

Sabotage the trial against Vought by killing multiple people in the courtroom.
Kill Alastair Adana for blackmailing her.
(all succeeded)

Victoria Neuman is a major antagonist in the 2019 Amazon Prime series The Boys. She appears as a supporting character and an ally of the Boys throughout season 2 before revealing herself to be evil at the end. She is set to return in season 3.

She is a mole of Vought-American tasked to oppose them as a means to keep everyone off guard and to gain information from and kill those against Vought. She is based on her comic book counterpart Victor Neuman.

She is portrayed by Claudia Doumit, who also played Beth Breen in Supergirl.

As of yet, her backstory is relatively unknown other than the fact that she was a dancer back in college, and videos of her dancing on campus as a teen went viral all around the internet. It is presumed that she is a secret member of Vought Enterprises and is tasked with blending in with those opposing Vought as well as doing their dirty work for them, she does so by pretending to be against Vought and their crusade to gain the trust of Grace Mallory and The Boys. At some point, she also gets married and has children with her unnamed husband.

Neuman first appears as a young, female congresswoman who is allegedly against Vought's agenda and the superheroes, after the exposure of Compound V, She started a rally and pushed the U.S. House Judiciary Committee starting a hearing about Vought and Compound V. She is often seen on TV ranting and debating against Vought and their agenda.

Victoria keeps up with Grace Mallory and certain insiders to get the information and access she needs to take Vought down. She has a big public presence, often leading protests and speaking on the news about the corruption at Vought unbeknownst to them, she is a spy sent by Vought.

At the end of Season 2, Victoria meets up with Grace who brings her Lamplighter  to speak up as a witness at the trial against Vought about what really happens behind closed doors at Vought. She wants to "bring down the king" and insists that they get more info to accuse Vought. She wants to find more proof about what goes on at the Sage Grove Center.

After Lamplighter's suicide, Billy Butcher convinces Jonah Vogalbaum to speak before Congress, which really pleases Victoria. However, just before his testimony, Victoria uses her powers to explode his head, along with several other people in the audience. Victoria gets splashed with blood and fakes her state of shock at the scene.

Therefore, It is revealed in the season 2 finale, What I Know, that she is a supe and is the one responsible for the attack at the congressional hearing as she proceeds to explode Alastair Adana's head, killing him instantly. She is last seen hiring Hughie Campbell who is applying for a job at her office while he is unaware of her affliation to Vought International.

Victoria first appears as a dedicated and outspoken woman who would stop at nothing to expose Vought Enterprises from their crimes, she also appears to care for her fellow citizens, rallying them up against Homelander after he killed an innocent civilian.

However, it was all merely a facade to hide her true-self, a Vought spy who is cold, cunning and calculated. She can adapt to any situation, catching Grace Mallory and The Boys off guard the entire time she was with them as she secretly collected information for their next step against Vought. She apparently shows no remorse for the people she have killed, smiling after she killed Alistair Adana after he blackmailed her. However, she is sane and sharp enough to notice the dangers of having Homelander around as well as his unstable mental state as she cautiously kept her eyes on him to presumably kill him if he were to snap.

Telekinesis - Similarly to Cindy, she is able to use her mind to crush people into bits though it is unknown if she could do the same with objects and surroundings just like Cindy. 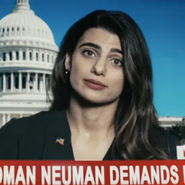 Victoria faking her shock at the courtroom massacre.