Leader of an international crime organization

Create a nuclear weapon with the same formula of Udo Teller (failed).

Defeat and kill his daughter, Gabby and both Napoleon Solo and Ilya Kuryakin (failed).

Terroristic Mastermind
Victoria Vinciguerra is the main antagonist of the 2015 spy-fi action comedy film The Man from U.N.C.L.E., based on the 1964 MGM television series of the same name.

She is a tall, beautiful and fair skinned blonde woman who speaks many languages with ties to known fascists. Her plan is to use a kidnapped German scientist to create a nuclear bomb for her and her husband Alexander Vinciguerra. Aided by her husband, she also leads an international crime organization.

She was portrayed by Elizabeth Debicki, who also portrayed Ayesha in Marvel's Guardians of the Galaxy Vol. 2 and Mina Jensen in The Cloverfield Paradox.

Victoria and her husband, Alexander, own a shipping company. They kidnap Udo Teller and his brother Rudi Teller and force them to develop their own private nuclear weapon that they would use to destroy the USA. until Teller's daughter Gaby seek help from CIA agent Napoleon Solo and Soviet spy Illya Kuryan were forced to team up by CIA and KBG to stop it. Victoria met Alexander when he owned his family business and had connections with Nazis and married him, and together they planned to rule the world with the help of Rudi Teller.

Solo crashed the party which was hosted by Victoria in order to get information. She orders her henchmen to track down Solo at Hotel before she lured him for drink and subsequently drugged him. She and her husband witness a father-daughter reunion between Gaby and Udo and smiled it at island. During the next 30 seconds Solo tells her that this is what is going on. In her arrogance she believes that she will be long gone on the submarine by the time they can shoot a missile at her. Just as she says this she sees other crew jumping off the fishing boat.

Solo explains that the missile is now only seconds from impact. Victoria looks up in surprise at the incoming warhead, knowing that she is doomed. The missile explodes upon impact, ripping her boat to pieces and killing her instantly. 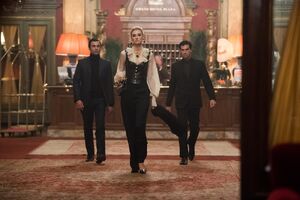 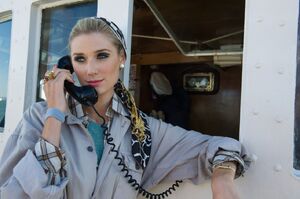 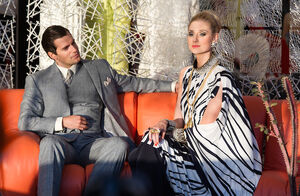 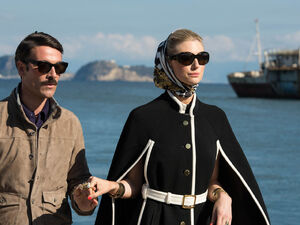 Victoria, with her husband Alexander.