Head of the Tarasov Crime Family

Protect his son (both failed).

Viggo Tarasov (Russian: Вигго Тарасов, Viggo Tarasov) is the main antagonist of the 2014 live-action film John Wick and a posthumous antagonist in its sequels.

He is a notorious Russian crime boss who is the head (or Pakhan) of the Tarasov Crime Family as well as Iosef Tarasov's father, and an enterprising businessman with questionable roots. He is also the former employer of John Wick (the hero of the film).

He was portrayed by the late Michael Nyqvist, who also played Nikola Kozlow in Abduction, Kurt Hendricks in Mission: Impossible - Ghost Protocol and Lothar Kraftzcyk in the Wallander TV series.

Viggo Tarasov is first seen when he was talking to a car mechanic named Aurelio about striking his son Iosef. Aurelio explains that he did it because Iosef stole John Wick's car and killed his pet puppy Daisy (which was a present from John's late wife Helen) for fun. Viggo was shocked by this revelation and ended the call, realizing that John is intending to kill Iosef in revenge for his dog's death.

As a result, Viggo punches his son twice in the stomach after giving him a drink. Viggo explains to Iosef that John was once his best hitman, which he refers to him as the "Baba Yaga" or the Boogeyman. Viggo explains that he saw John kill three men with a pencil and gave him a job assassinating many of his rivals with ease, but this changed when John met Helen and told Viggo that he wanted to retire to spend a new life with Helen. Viggo agreed to let John go on the condition that he complete an "impossible task": killing all of his rivals in one night. Much to Viggo's surprise, John managed to accomplish the task, which led to the formation of the Tarasov syndicate, and Viggo released John from his work as agreed. Viggo angrily berates Iosef for stealing John's car and killing his dog, but Iosef refuses to care and instead tries to persuade his father to undo the things he committed by finishing off John only to be swiftly dimissed and warned by Viggo, that John will eventually come for him and kill him.

Viggo tries to reason out to John by a phone call out of seeking vengeance, but John silently refuses. Viggo then sends a 12-man hit squad to John's house to kill him, but John kills them all and has the bodies professionally removed. An unsurprised Viggo then places a $2 million contract for John's murder and personally offers the contract to Marcus, John's mentor, who accepts.

Upon learning that John had sought refuge in the Continental Hotel which had its rules forbidding killing in its premises, he immediately doubles the bounty for those who are willingly to break it and had his son Iosef secured at his nightclub, the Red Circle but not long before John storms the nightclub and attempts to kill Iosef but to no avail after Iosef's chief of security, Kirill and his henchmen waylaid him while Iosef flees.

As he discovered his cache of money and paraphernalia materials destroyed by an arson set by John at a church within a safe house which serves as his front upon a confession of an Orthodox priest which he quickly responds by executed him, Viggo then kidnaps John and holds him captive which led to a coversation between Viggo and John in which the former mocked John for leaving his old life behind, Viggo then tries to have his henchmen torture and murder John but he was able to escape (through Marcus' assistance by use of a sniper by killing the other henchmen) then engaging Kirill in a brawl before strangling Kirill to death, he then chases after the SUV and shoots the driver (Viggo) in it.

Under John's gunpoint, Viggo is forced to reveal Iosef's location at his safe house in Brooklyn. Viggo tells John that his son and his henchmen know of his arrival as John took note as he moved away from Viggo while he attempts to drive back to his condominium. Disappointed, he returned to his penthouse and sat down in his chair at his office, smoking a pot of weed contemplating as his son is swiftly murdered by John. Later on, Viggo meets Marcus up at his house where he savagely beats Marcus within an inch of his life for betraying his orders of killing John Wick, Marcus is able to kill two men before Ms. Perkins shoots Marcus in his chest once and Viggo finishes him off, shooting him twice. After this, Viggo calls John to report this, planning to have Perkins ambush him. Perkins, however, was instead executed by Winston's henchmen for breaking the Continental's rules.

At the end of the film, Viggo tries to escape by helicopter at the harbor, but John intervenes and kills all of Viggo's remaining henchmen by shooting all of them and runs Avi over with the car. Wick is then crashed in to by Viggo but Wick is able to get out safely and confront Viggo on the dock. Viggo tells John no more guns, no more bullets, John replies "no more bullets", then he throws the gun, Viggo also tells John "just you and me, John", John than responds "you and me". They engage in a fistfight in which John gets the upper hand until Viggo pulls out a knife and attempts to stab John in the stomach. John forces Viggo to stab him in the stomach where he breaks Viggo's arm. John then pulls the knife out of his stomach and then jams the knife into the side of Viggo's neck. They both drop to the floor, Viggo looks at John and says to him his final words "Be seeing you, John." John looks at Viggo and responds "Yeah, be seeing you." Viggo then slumps over and dies. 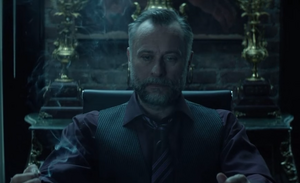 Viggo contemplating while his son is killed by John Wick.

Viggo and John before their final fight.

Viggo dying from the knife wound.