Fighting the Green Arrow and his team (formerly).

Kill every criminal in Star City no matter the civilian cost (formerly).

Vincent Sobel, publicly nicknamed Vigilante, is an active vigilante operating in Star City after Genesis Day, using lethal weapons to carry out his acts. He has also been dubbed Mr. Ski Goggles by Felicity Smoak. He serves as an anti-villain in Season 5 and one of the secondary antagonists turned anti-hero/supporting protagonist in Season 6 of the CW superhero TV series Arrow. However he was actually undercover helping to take out the antagonists.

He was voiced by Mick Wingert, portrayed by Clayton Chitty in Season 5 and by Johann Urb in Season 6.

Vigilante has shown so far that he has little-to-no morality or care for many of his actions. His view of criminals, particularly in organized crime, is that all of them are dangerous and should be eliminated; this matches the outlook of Oliver Queen during his early days as "the Hood", killing mercilessly and without care. Though Vigilante seems to be less moral than Oliver, who later became known as the Green Arrow and caused less bloodshed than he did before, he still seems to consider himself equal to Green Arrow, as they are both vigilantes rooting out criminals. While Green Arrow interrogated a mobster, Vigilante, not caring that he could provide information about his connections to other gangs in Star City, shoots him dead while Green Arrow watches. Green Arrow condemned his actions, but Vigilante didn't care for his words.

His efforts to cleanse the city of crime and corruption seems to know no bounds; to this end, he targeted Mayor Oliver Queen after he was revealed to have covered up the circumstances surrounding the death of Detective Billy Malone, meaning he views political corruption as being reason enough to be put on his kill list. When he fails to accomplish a hit, Vigilante is unrelenting in his pursuit of them, despite outside resistance from police officers or even Green Arrow, as mentioned before. His pursuit of Oliver, not knowing that he is the Green Arrow at the time, led him to be confronted by Prometheus, who wanted to be the one to kill him himself, but Vigilante, being as stubborn as he is, didn't care, fighting Prometheus head-on and escaping from him to continue his goals.

During an undercover operation in Sean Sonus' organization, Vincents Cover was blown. While he was shot in the head by Sonus, he was struck by dark matter and turned into a meta-human with the ability to regenerate at accelerated speed.

Emerging as a dangerous vigilante after Genesis Day, enacted by infamous sorcerer and terrorist Damien Darhk, Vincent messed with Triad gun-running deals in Star City, and also tried to stop their money laundering through Star City Trust Bank. These actions brought the attention of Felicity Smoak, who was looking for recruits to join up with Oliver Queen/Green Arrow and fight off crime in Star City, of which Oliver had become the Mayor. She had called him a "hacktivist" due to his technological knowledge.

After the Spooky Crew, a gang of skull-masked criminals, began robbing banks, Vigilante went after them. During their heist at Star City National Bank, Vigilante killed Rickie Jenkins. That night, they hit Star City Allied Bank. However, before Vigilante could kill any of them, Team Arrow intervened, with Green Arrow asserting his opposition to what Vigilante was doing, causing the latter to quickly escape. Later on, he attacked the Papp Motel where Eric Dunn was hiding. Fortunately, Green Arrow was there and escaped with Dunn.

The following night, Team Arrow posed as the gang, pretending to rob Star City Trust Bank. Vigilante saw through the ruse and knocked Artemis out, taking Mr. Terrific as a hostage. Allowing the rest of the team to go, Green Arrow shot an arrow at Vigilante before he could kill Mr. Terrific, strapping him to a pillar. Before he could be unmasked, an explosive went off, allowing him time to escape.

Vigilante once again engaged with Green Arrow and Spartan at a warehouse, but before his bullets could hit them, they were saved by The Flash, who needed Team Arrow to help in facing an alien race known as the Dominators.

As Green Arrow tracks down a member of the Bertinelli crime family for interrogation, seeking to find the person that shot up City Hall and killed 7 people. However, Vigilante arrives and shoots the gangster to death right before the Green Arrow's eyes, believing that he'd done him a favor in getting one less criminal off the streets. Green Arrow accuses Vigilante of being a dangerous criminal himself for his brutal methods, and thus the masked avenger fires upon him before escaping.

After it is publicly revealed that mayor Oliver Queen willingly hid the truth of the murder of Detective Billy Malone from the public (that Green Arrow killed him, but by accident, unbeknownst to anyone else), even convincing a coroner to fake the autopsy report, Vigilante adds Oliver to his kill list, because he holds Oliver's "corrupt" methods in contempt. This leads to Vigilante attacking Oliver's limo at night after the first part of his impeachment hearing, with District Attorney Adrian Chase and Oliver's half-sister Thea Queen also being inside. Everyone inside the car survives and Thea and Oliver both engage Vigilante, only to be defeated. Vigilante himself is only scared away when Dinah Drake, the new Black Canary, blasts him away with her sonic scream. The impact breaks off part of Vigilante's visor.

The visor part is later used by Prometheus to track down Vigilante. On a rooftop, Prometheus engages Vigilante as he claims that Oliver is his enemy to kill. Vigilante replies that he will kill Oliver first and opens fire at Prometheus. Prometheus dives into cover and ambushes Vigilante from behind, throwing him off a rooftop after a brief struggle; Vigilante somehow saves himself and Prometheus, unmasking himself as Adrian, reports a Vigilante sighting.

The next night, as Oliver prepares for a press conference in which he would explain why he covered up Malone's death, Vigilante sat in a building across the street with a sniper rifle, intending to take a shot at him. However, Team Arrow arrives and they manage to stop him; Mr. Terrific uses ball-shaped metal devices as bombs to stun Vigilante, who ends up escaping from them in the end, having failed to kill Oliver. Oliver, meanwhile, publicly-announces that Green Arrow killed Malone and he didn't want to believe that he was responsible, thus making him a fugitive again and allowing Vigilante the upper-hand in battles to come.

Vigilante is later trying to kill the councilwoman of Star City, Emily Pollard for supposedly supporting anti-vigilante legislation. Vigilante tries to kill Emily with a sniper rifle, but was stop by Dinah Drake. However, Vigilante escaped from the scene. Later at night, Dinah sees Vigilante trying to sneak in Emily's apartment, Dinah stops him and used her Canary Cry to destroy his googles. The Vigilante takes off his mask and revealing his identity to be Dinah's former partner, Vincent Sofel. This throws off Dinah, letting Vincent to escape.

Vincent later trapped Emily and tries to kill her, but was stopped by Dinah once again. A police officer later aim his gun at Vincent and Dinah, pulls the trigger and shot Vincent. Dinah tells the cop to get an ambulance, but was surprised by Vincent's healing factor. Vincent talks to Dinah about happened to him, after that Dinah allowed Vincent to escape and inform Team Arrow. Later on he left a gift for Dinah in her car the same kind he used to when they were together, revealing that there is still a part of the man that he was in him.

Vincent continued sending messages to Dinah, Dinah agreed to meet him. Dinah refuses and tells Vincent to leave Star City forever or next time She'll rake him down. After Dinah finds out that Oliver has been watching her, she leaves Team Arrow and contracts Vincent and tells him that she needs a friend. But later revealed that Vincent has been working for Cayden James' Cabal and has been watching Dinah and Team Arrow for months.

Vincent is later seen with Dinah on a friendly date, Dinah found out Vince was part of Cayden James's criminal cabal heartbroken and outraged she confronted him. Vincent however, overtook her when he saw that she wouldn't easily be calmed down and listen to him. 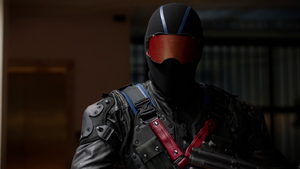 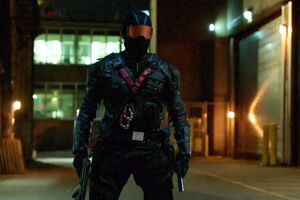 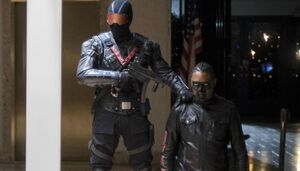 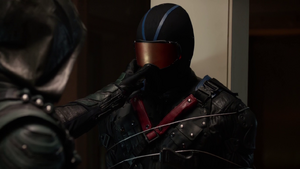 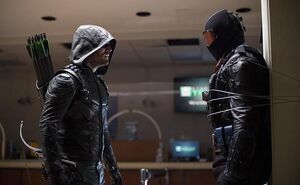 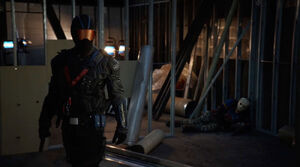 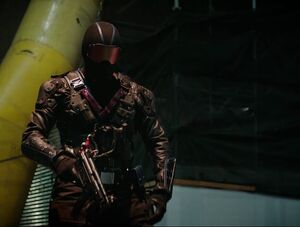 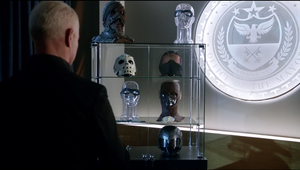 Vigilante's mask alongside other fallen heroes in Damien Darhk's collection. 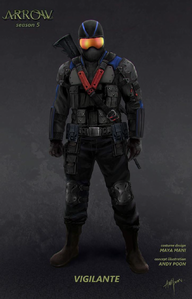