Adrian Chase, best known as Vigilante, is one of the two tritagonists of the 2022 DC Extended Universe streaming series Peacemaker (along with Emilia Harcourt).

He is a busboy by day and a sadistic crime fighter at night, as well as an avid fan of Peacemaker, even joining him in an iteration of Task Force X to stop an invasion of aliens known as Butterflies. He also serves as one of the two archenemies (Alongside Peacemaker) of Auggie Smith, AKA White Dragon.

He is portrayed by Freddie Stroma.

Adrian Chase was born on June 30th, 1991 in the United States to unnamed parents, and is the younger brother to Gut Chase. According to Adrian, his father would reveal his sexuality to his wife, and his mother left the family afterward. At some point, Chase decided to become vigilante under the same name, and would ruthlessly kill anyone who broke the law by committing severe or small crimes. Due to his actions, he gained the attention of the authorities and was wanted on multiple counts of murder. While keeping his alter-ego a secret, Adrian worked as a busboy at Fennel Fields, and encountered Christopher Smith (also known as "Peacemaker") through his brother. He became a fan of Smith's work as a vigilante, and wanted to befriend his idol before Peacemaker was sent to Belle Reve.

While working at Fennel Fields, Chase noticed Peacemaker in his costume speaking with some people, and became enthusiastic as his idol had returned. The following day, Adrian arrived at Smith's trailer and comforted his idol, as the latter was starting to question his ideology. Vigilante would try to raise Peacemaker's spirits by shooting appliances with him, throwing dynamite at each other, and having a sexual encounter with Amber Calcaterra. When Peacemaker continued to work with Task Force X to deal with Project Butterfly, Adrian followed them as he didn't trust the other members. He was spotted by Emilia Harcourt and argued with her, but he continued to stalk the task force when they traveled to the Goff residence to eliminate the family.

When Peacemaker was ordered to kill Royland Goff and his wife and children, he hesitated and Vigilante told him to move so he could kill them. Vigilante killed Royland's wife and children without hesitation, but before he could the last living Goff, he was attacked by Judomaster. Vigilante and Peacemaker attempted to defeat their opponent, but the two were easily defeated and taken to the Goff house, where Chase was tortured by Royland. The two were freed when the task force used explosives, and Smith succeed in killing Goff by shooting his head. Before leaving the residence, Vigilante and Peacemaker saw a butterfly leave Goff's body, and Smith would capture the alien insect before it could escape.

After being rescued by the group, Adrian drove Smith to his father's home where he noticed that Auggie Smith was a racist, and expressed his disgust to Peacemaker. Smith would learn that his father was framed for his crimes and was taken to prison, and apologized to Adrian for not showing sympathy for allowing him to be tortured. Chase then drove him to the Evergreen Corrections Center, where he spoke with Leota Adebayo, who believed that Smith was a good person, but that his father should be taken care of so that he could be happy. Adrian then decided to kill Auggie, having himself get arrested and sentenced to the corrections center to confront him. Upon angering Auggie and the Aryan Brotherhood, Chase quickly defeated the inmates before being placed in handcuffs, and told Auggie that he was a terrible father. This would make Auggie think that his son was trying to kill him, and Chase realized his mistake after being released by Harcourt.

Adrian Chase is enthusiastic to help others and sadistically loves violence. He isn't very intelligent, but he ultimately wants to make friends, reaching the point of considering Christopher Smith as his best friend due to the admiration that Chase has for him. Underneath, he's rather awkward and has a "shoot first, ask questions later" attitude, acting like something of a man-child. However, Chase showed to be very confident when he went to confront Auggie Smith, as he didn't show fear. 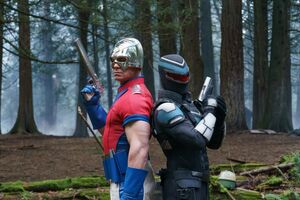 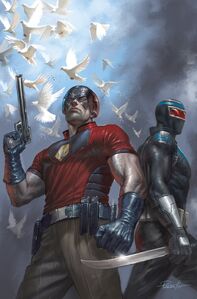 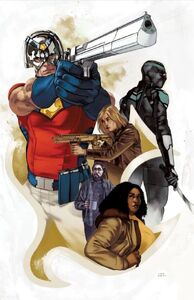