First of the Evil Deities

God of Evil
Founder and leader of the Vigoor Empire

Being worshipped (especially by the Holy Vigoor Empire).

To gain the powers of the Dark Dragon Blade and rule over all creation.

Have the Holy Vigoor Empire control all of Earth and convert many followers in his "holy" name.

Vigoor was born from the fear and hatred that came to exist at the beginning of the universe alongside the first deity Gurdu who represents peace and wisdom. He became ancestor of all Fiends and the Evil Deities, and he began devouring the worlds, unleashing undiluted chaos upon the cosmos. However, Vigoor was eventually opposed by the 13 Divine Dragons (also known as the Dragon Gods) in a battle that lasted aeons before he was finally beaten. But he was far from undefeated and Vigoor would take many opportunities to terrorize creation, albeit indirectly, such as his corruption of the youngest Dragon God into the Dark Dragon and the birth of the fiends from his body. However, Vigoor finally returned personally in the form of the "Holy Vigoor Emperor", his first "disciple" who would be infused with his essence, and later he built his namesake, religious imperial cult known as the "Holy Vigoor Empire". It is unclear exactly where the Emperor came from but he did come to found the empire dedicated to Vigoor on the spot where the Dark Dragon had been corrupted eons before. The fiends would find a home in this " kingdom ", where they and Vigoor were worshipped fanatically. The Emperor waited for his chance to fulfill the prophecy of Vigoor's return, that said he would plunge the world into chaos yet again.

The Vigoor Emperor eventually learned the location of the Dark Dragon Blade from the Dark Disciple and quickly sent his Greater Fiend servant, Doku, to retrieve it for him. He succeeded, razing the Hayabusa village in the process, and Ryu Hayabusa came after him to retrieve the blade and have revenge. However the Emperor planned for this, sending his forces against the ninja, knowing they would die as this would feed the Dark Dragon Blade. His power grew, causing the dark influence of Vigoor to spread until finally the Dark Dragon Blade was unsealed. The Emperor drew on its power to become a true incarnation of Vigoor, casing all reality to fall apart and summoning huge hordes of fiends. Eventually, Ryu faced off against Vigoor himself and managed to actually defeat his first form using the True Dragon Sword. Enraged, Vigoor emerged from the lava he had fallen into in a far more demonic form and attacked Ryu again. But he was again defeated and destroyed, freeing Ryu of the fiend curse that was on him.

However, the fiend goddesses, Ishtaros and Nicchae, sought to bring back the Vigoor Emperor so as to begin the age of fiends again using the Dark Dragonstones. Ishtaros would end up slain by Ryu but her body was charged with energy from the stones which Nicchae used to resurrect the Emperor in his form as Vigoor's reincarnation. However the Dark Dragon was suddenly revived from Ishtaros' body, draining the power from the Emperor and making him degenerate to his demonic form. Ryu took him on and destroyed him yet again.

Though his appearance has yet to be revealed, it may be similar to the Demon Statue representing him. From the description in the Pyramid of the Necromantale (named after the religious Fiend cult known as the Order of the Necromantale), Vigoor at least has a head, 2 arms and 2 legs.

His true and final form is a large, horned devilish skull at the top of a horrendous mass pile of large skulls with 4 skeletal legs. This form is the result of his earthly vessel, the Vigoor Emperor, losing his deity powers.

The Vigoor Emperor, Vigoor's alternate incarnation on Earth, is said to look like a strong man with shoulder length white hair.

Once it is a deity, it becomes a 100 ft. tall angelic being. This deity form has a dislocated head floating above its body, with feathered angel wings on the sides of its head. It also has a larger pair of angel wings on its back, and its body is covered in a metallic carapace.

Vigoor is a being of incredible power, given that he is a powerful deity with a warped sense of direction, able to bend reality's laws and warp the world into chaos with ease while even ignoring the concept of time.

The Vigoor Emperor possessed his own supernatural powers before being transformed into Vigoor incarnate, but after unsealing the Dark Dragon Blade fully, he obtained all of Vigoor's power. Vigoor can also transform other beings including into Fiends and unleash various powerful attacks upon his prey, such as a grid of energy beams.

The embodiment of all things evil, Vigoor wants nothing more than to rule over all as the one creator deity by devouring and destroying the current universe, so it may be reborn into a Fiendish universe under his reign.

The Vigoor Emperor is a ruthless being who longs to fulfil the fiendish prophecy and become the true incarnation of his master, Vigoor, who desired to rule over the cosmos as it's sole deity. His is highly militaristic and tyrannical, ruling the rogue nation of the Vigoor Empire with an iron fist, in secret and closed off from the rest of the world. Through religious fundamentalism, he brainwashes his subjects to forever faithfully worship Vigoor as their god, and a holy supreme deity, wishing the rest of the Earth's populace to do the same. 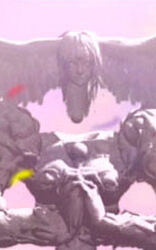 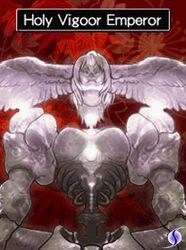 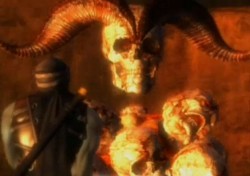 Retrieved from "https://villains.fandom.com/wiki/Vigoor?oldid=3722012"
Community content is available under CC-BY-SA unless otherwise noted.