Rampaging and destroying everything in his path.

Destroy the entire city and defeat the Tamers.

Vikaralamon is the Pig Deva who works for the Sovereign Ebonwumon, and an antagonist in Digimon Tamers. Vikaralamon is an Ultimate Level Digimon that represents the pig in the Chinese Zodiac, but he resembles more of a wild boar instead of a pig. He is the size of a small mountain and eats everything around him. He sleeps with his eyes open.

Vikaralamon served the Sovereign Zhuqiaomon instead of Ebonwumon. Vikaralamon was the last Deva to bio-emerge into the Real World, and quite possibly the most powerful of the Deva. Thanks to his massive size, extreme durability and great strength, Vikaralamon rampages through Shinjuku, causing huge destruction it leaves behind.

Because the attacks of the Tamers Digimon at their Champion level had no effect on Vikaralamon, they digivolved to their Ultimate level and thus Rapidmon, Taomon and WarGrowlmon engaged again in battle against him. However, Vikaralamon's attacks brought great problems upon the three Digimon, especially WarGrowlmon, who was trapped under an energy ball for most of the fight.

In the meantime, Mitsuo Yamaki prepared to activate the Juggernaut program, but Vikaralamon opened a rip in the sky before Juggernaut was activated. When Makuramon used an attack on the Hypnos building, everyone evacuated it (except Yamaki) and Vikaralamon returned to attacking. Takato, now having enough of running away, decides to fight back by screaming with effort at WarGrowlmon, giving him his strength back, frees himself and pushed back the giant boar with tremendous force and finally defeats Vikaralamon by firing his Atomic Blaster at point-blank range, but only to have the town in ruins.

Vikaralamon, since he is a gigantic Digimon with strength, can tear streets open and break through bridges.

He is a subordinate of the Four Holy Beasts member, Ebonwumon, and is a member of the Twelve Devas. This Digimon took on the form of the "Boar". He has a huge body like a mountain, and is always eating everything around him. He sleeps with his eyes open. He discharges a spherical light called "Treasure Orb" from his mouth. 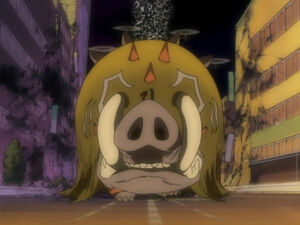 Vikaralamon in the Real World