The Vikings are minor antagonists in Disney's 41st full-length animated feature film Atlantis: The Lost Empire. They are ruthless Viking explorers who are bent on finding the lost city of Atlantis to harness the power of the Atlantean crystal.

Starting off near the coast of Iceland in 997 A.D., the Vikings went on an expedition to find the lost city of Atlantis. Thanks to a certain text (known as the Shepherd's Journal), their captain was able to decipher enough clues that can lead to the secret entrance of Atlantis below the ocean floor.

After having passed the final marker as described on the journal, the Viking captain orders his posse to head onward to the entrance to Atlantis. However, one of his underlings pointed out that the entrance is guarded by monsters (including the Leviathan), but the captain angrily orders his posse to continue forward, even telling his underling that he would kill a dozen monsters just to get his hands on the crystal that he desires.

Needless to say, the Vikings saw the Leviathan rising out from the water and using its tiny tentacles to attack the ship and grab the Vikings down to their watery deaths. The Viking captain is only one standing as he managed to cut out any tentacles coming towards him, but as soon as he discovers that his men have been killed, he angrily curses at the Leviathan to do its worst before being crushed to his death by a falling mast. The Leviathan then emits a beam to destroy the Viking ship, leaving nothing intact, except for the Shepherd's Journal, which ends up floating in the sea until it reached the coast of Iceland. The Journal would later be found by Thaddeus Thatch (the grandfather of Milo James Thatch) during an expedition commandeered by Lyle Tiberius Rourke and his men during the early 1910s.

The Viking captain threatening one of his underlings about the Leviathan.

The Viking captain ordering his men to sail to the entrance of Atlantis.

The Vikings witnessing the arrival of the Leviathan.

The Vikings panicking as the Leviathan attacks their ship.

The Vikings being dragged to their watery deaths by the Leviathan.

The Leviathan destroying the Vikings' ship with a beam. 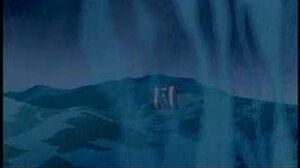