The Machinist
The Augmentor
Great Maker (by his creations)

Viktor, also known as The Machine Herald, is a villainous playable character in the multiplayer online battle arena game League of Legends.

An eccentric inventor in the fringes of Zaun, Viktor is an idealist who has dedicated his life to understanding new and exciting technology. Believing that cybernetics are the key to unlocking humanity's potential, Viktor has become a fanatic for his cause and will stop at nothing to create a bright, mechanical future.

The ninetieth champion added to the game, Viktor was released on December 29, 2011, and is most commonly played in the mid-lane.

He is voiced by Owen Thomas.

Viktor was born in the Entresol level of Zaun, the polluted undercities of Piltover. An inventive child, Viktor was incredibly dedicated to building things and studying for days on end. Viktor's artisan parents were supportive of his work, however because of the pollution and chemtech accidents near their home, the family had to move around frequently, annoying Viktor, who was already vexed whenever his work had to be interrupted by eat and sleep. As a result, Viktor began to study the local accidents and came to realize that they were not because of faulty equipment or mechanical failures but instead because of one thing: human error.

Upon visiting the local businesses, Viktor presented his collected data and offered inventions that could create safer working environments. Most establishments turned the young inventor down, but after the Fredersen Chem-forge accepted his work with highly successful results, Viktor's inventions became some of the most sought after in all of Zaun. By the time he was nineteen, Viktor's genius had become so renowned that he was offered not only a scholarship at Zaun's College of Techmaturgy, but also a place at the Piltover's academy. At the request of Professor Stanwick, Viktor chose to leave Zaun to attend Piltover's academy, where he could refine his inventions with the wealthier city's resources and spread them to help more people.

At the City of Progress, Viktor was often ostracized by his colleagues, as his methods were wildly methodical and unconventional, too much so for the other students to understand. The closest person Viktor ever had to a friend was Jayce, who he met at the mandatory Progress Day party. Jayce was a particularly rude Piltovan whom many at the academy avoided for his insufferable attitude, but Viktor knew genius when he saw it, and Jayce's genius was unmistakable. While their methods were vastly different, Viktor knew that Jayce was the only one of his colleagues who could rival his intellect, but the two butted heads frequently during the many projects they worked on together due to their differing viewpoints.

One day, back in his home of Zaun, a massive chem-spill devastated the undercity, forcing an immediate rescue effort. Hoping to use his skills to aid the effort, Viktor returned home, constructing a massive hextech golem named Blitzcrank to help save the lives of Zaunites trapped by the the toxic disaster. To ensure that as many lives were saved as possible, Viktor stayed behind in Zaun even after his golem had disappeared, hoping to aid the victims by use of cybernetics. However, when Viktor returned home, he was shocked to see that Professor Stanwick had stolen his designs for Blitzcrank in his absence. When Viktor filed a formal complaint on the matter, the academy ignored his pleas, and even Jayce refused to speak up on his behalf, widening the rift between the two of them.

Defeated, but still determined, Viktor returned to his studies, believing there to be more important matters than obsessing over one stolen design. At the center of his research, Viktor sought to eliminate all sources of human error, which he believed to be the root cause of failure in society. Many of Viktor's colleagues disagreed with him vehemently, stating that humanity was an important source of creativity. But Viktor, in his logical approach, held fast in his beliefs despite his colleagues' protests.

One day, Viktor and Jayce were once again tasked to work together on a project, where they would enhance diving suits to help clear the docks of pollution. During many dives, wearers often complained about hallucinations in the depths, which often led to the deaths of themselves or their fellow divers. As a solution, Viktor invented a helmet that could bypass the wearer's fear response in such an event, essentially controlling the diver's actions remotely. Jayce was horrified by Viktor's disregard for free will, which not only culminated in a falling-out between the two inventors, but also Viktor's expulsion of Piltover's academy and the scientific community as whole.

Disgusted by the elite, narrow-minded ideals of his Piltovan colleagues, Viktor once again took up residence in his old laboratory in Zaun. Normally, Viktor wouldn't be bothered by such a setback, but the reaction to his life's work had left Viktor feeling so defeated that he sank into a deep depression. Viktor was left conflicted; on one hand, his new inventions could be considered unethical, but from a purely logical standpoint, the enhancement of human anatomy could save many lives. After many weeks of thinking, Viktor finally realized that his own human weaknesses and emotions were holding him back from his research, and after a quick and painful self-surgery, Viktor had these parts of his brain removed and replaced with mechanical circuitry. When the procedure was finished, Viktor was a changed man, with no pain or petty emotions to hold him back.

After his surgery, Viktor became obsessed with the "glorious evolution" of humanity, replacing the majority of his body with mechanical augmentations. Viktor saw hextech cybernetics as the key to unlocking humanity's potential, and hoped that by pioneering this cause, more would soon join him in the renouncement of flesh for a new, upgraded future. And to an extent, Viktor's plans worked. Whenever someone was injured, or mutilated, or mortally wounded, the most desperate of Zaunites could visit Viktor to have themselves repaired, or better, upgraded. Some even came to worship Viktor as a messianic figure, though Viktor was not a fan of religious cults and simply dismissed them. But while Viktor's enhancements came to save hundreds of lives, seeking his help was not without consequences, as unexpected results were common when employing the dangerous creativity of the Machine Herald.

Disaster in the Sump

Following a chemtech disaster in the Sump, Viktor was forced to bring unconscious victims into his lab, as a poison in their brains left them in critical condition. Viktor operated on their brains to slow the process, but upon examination, Viktor realized that the equipment in his laboratory was simply not strong enough to reverse the damage. With no other option, Viktor turned to his former colleague Jayce, who had come into possession of a powerful hextech crystal. Viktor requested to borrow the crystal, but when Jayce refused, Viktor stole it instead, unwilling to let his former friend's stubborness get in the way of his work.

Viktor brought the crystal back to his lab, and its power was enough to begin to reverse the toxins' effect. But before the process could complete, Jayce returned, and, horrified by the gruesome sight of the toxins, victims, and mechanical equipment, began to smash everything in sight. Viktor sent his automatons to kill the intruder, but it was too late, as Jayce shattered the crystal, destroying the laboratory, and victims, and Viktor's automatons.

Jayce was hailed as a hero by the citizens of Piltover, but Viktor knew the truth: Jayce's arrogance had cost these people their lives, and served as only further proof that the weaknesses of humanity must be cured once and for all. After Viktor left the rubble of his old laboratory, he sent chem-augmented thugs to raid Jayce's lab for more shards of the hextech crystal. When they failed, Viktor decided it would be best to forget about Jayce, and instead moved on to other projects that could help bring about his glorious evolution.

Viktor doesn't know when his evolution will unfold, but in the fringes of Zaun, the mechanical inventor is still out there. Somewhere in a small laboratory, Viktor believes the age of flesh is coming to an end, and he is always ready to put in action the necessary steps to making his future a reality.

In game, Viktor is a battlemage-type character, an offensive caster that burns down enemies from within the fray with his spellcasting abilities. Viktor's passive, Glorious Evolution, grants him a Prototype Hex Core as a special item that can be upgraded over time to augment Viktor's abilities. With Siphon Power, Viktor can blast his foes with energy, giving him a shield (plus a speed boost when upgraded). With Gravity Field, Viktor places a device that can slow and stun enemies, and with Death Ray, Viktor's cybernetic arm blasts a laser beam that damages enemies on the ground. Viktor's ultimate, Chaos Storm, creates a mobile device that blasts enemies with lightning in a radius over time.

Viktor is a staunch perfectionist, valuing efficiency and progress above all else. Thus, while he is an idealist at heart, Viktor does not tolerate failure, and anything he sees as an imperfection in himself or in others is a weakness that must be removed. When Viktor believed that his emotions were holding back his research, he simply removed them by operating on himself, leaving him more robotic.

A transhumanist, Viktor doesn't believe in the weaknesses of flesh and thinks that humanity must evolve through cybernetics to survive. As a result, the majority of people across Piltover and Zaun find Viktor's work to be reprehensible at worst and fringe at best. However, Viktor doesn't care what anyone thinks, remaining too determined and single-minded in his goals to ever seek vengeance or petty personal agendas.

While many are shown to hate Viktor for his villainous appearance, Viktor doesn't hate others and is even shown to sometimes be very helpful, granting enhancements to people who request them and even helping a young boy confront bullies. As a result, while Viktor may be fanatical in his research, his actions are born from the best intentions, and Viktor may not be as bad as he initially seems.

Viktor as he appears in Legends of Runeterra. 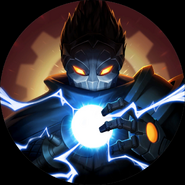 Another version of Viktor's artwork.

Blitzcrank, Viktor's greatest invention.
Add a photo to this gallery

Retrieved from "https://villains.fandom.com/wiki/Viktor_(League_of_Legends)?oldid=4101985"
Community content is available under CC-BY-SA unless otherwise noted.