Hungarian warlord (as a human)

Elder (as a vampire)

Keeping himself and the rest of the Vampires in power

Kill Michael and Selene
Prevent a mixing of the species (all failed).

He was portrayed by Bill Nighy, who also played Davy Jones in the Pirates of the Caribbean films, Rattlesnake Jake in Rango, Whitey in Flushed Away, General Fallon in Jack the Giant Slayer, The Network in The World's End, Prince Naberius in I, Frankenstein, Leo Argyll in Ordeal of Innocence and Howard Clifford in Pokémon Detective Pikachu.

Viktor was a Hungarian general and warlord born sometime in the 7th century. As he was nearing the end of his life, Marcus Corvinus, the first Vampire, came with an offer: immortality in exchange for Viktor's military expertise and army in combating the Werewolves, spawn of Marcus' own twin brother, William. When Marcus converted Viktor, the general became a Vampire Elder and the first Death Dealers were created from Viktor's army.

About 6 centuries later in 1202, Viktor led a successful campaign against William. He promised Markus that he would not harm William, despite the powerful werewolf's uncontrollable nature. Viktor and Amelia, his most trustworthy political consort, ultimately managed to locate William in the ruins of a Hungarian settlement, where he had infected the villagers during one of his countryside attacks. The vampires captured the volatile wolf with Markus' consent, but Viktor betrayed his fellow Elder in an exhibition of his new found political muscle, giving orders to keep William as far away from his twin brother as possible.

Viktor proceeded to lock the forefather of the Lycans away in a fortress, its exact location unknown to Markus for obvious reasons. However, with the Death Dealers unquestionably loyal to Viktor, Markus could do nothing for fear of his brother's assassination. Viktor himself kept two keys to William's dungeon: one under his chest, in his ribs, and the other around his daughter Sonja's neck, cleverly hiding it under Markus's nose.

The relationship between the two Vampire Elders was always strained. Viktor, with Amelia's support and his own political genius, undercut Markus' power as ruler of the Vampire coven, ensuring that he would never have the strength to liberate his brother and form a resistance. However, Viktor never staged an outright coup against Markus, as he had been informed that, should Markus ever die, all in his bloodline would follow him to the grave - including Viktor and the rest of the council.

To prevent this from happening, the chain was constructed by the Elders, a system where only one Elder reigned over the coven while the other two slumbered. Viktor even domesticated the Vampires' former enemies, using the Lycans as watchdogs to guard them during the daylight hours. Eventually, Viktor's autocratic actions sparked an outright war between the vampires and the Lycans.

Viktor's daughter, Sonja, fell in love with a Lycan servant named Lucian and became pregnant. Viktor eventually discovered this and feared the blending of the species that would result when the child was born. He condemned Sonja, her unborn child and Lucian to death. Sonja was burnt alive by exposing her to sunlight as Lucian watched in horror. That night, Lucian used the full moon to transform and escape - but not before taking Sonja's pendant with him. Although he appeared as an emotionless authority at the time, Sonja's death haunted Viktor for the rest of his life. Ironically, it even led to his own demise and the creation of the first lycan-vampire hybrid.

After the judgment of his beloved, Lucian waged a war on the fortress of Viktor's coven, confronting his former master and engaging him in a fierce duel. Although Viktor was more powerful, Lucian had one decisive advantage: sunlight, which burned the flesh of any vampire that came into contact with it. Using the rising sun to subdue the Elder, Lucian temporarily ended the reign of Viktor by stabbing him in the mouth and tossing his supposed corpse into the water. However, death does not come easily for the ancients.

Viktor, determined to keep the location and map of the dungeon a secret from Markus and Lucian, slaughtered the family of the man he had commissioned to design it. He spared the man's daughter, Selene, however, as she reminded him of his beloved Sonja. He converted her into a vampire soon afterward. The war raged on, and eventually drew to a close after Lucian was seemingly killed by Kraven in a raid that was sanctioned by the Elder.

After this, Viktor gathered more power for himself, ascending as the leader of the Old World coven, Ordoghaz, and going so far as to alter history. In the revised version of history set out by Viktor, he was the oldest and strongest of the vampires, and Markus' true heritage was never told. In time, he exiled the official historian of the coven, Andreas Tanis, who knew that Markus preceded Viktor in conception due to his access to hidden documents.

In the present day, Viktor was hibernating, not to be awakened for another 100 years. However, Selene was determined to awaken Viktor from his slumber because she believed only he would have the power to deal with the apparent conspiracy between Ordoghaz's regent, Kraven, and Lucian. A furious Viktor confronted his protege, condemning her to be judged for breaking the chain and awakening him ahead of schedule. However, Selene evaded capture, and returned with proof of not only Kraven's treachery, but Lucian's plan to use the blood of Michael Corvin to create a Hybrid. Viktor promptly launched a full-scale assault on the Lycan lair, easily breaking the neck of Raze when the transformed Lycan attacked him. He then encountered Selene biting Michael, and, infuriated, proceeded to throw the Lycan through a concrete wall. Unbeknownst to him, Kraven had revealed his duplicity in the death of Selene's family only moments before, furious that his assassination had been considered by the current Elder.

Viktor contended that he had given Selene immortality in return, and that he had only been trying to protect the species from what he perceived as unnatural defilement - only to be confronted by his ultimate fear: Selene's bite had reacted with the Lycan virus and the Corvinus Strain in Michael's body to create a Hybrid, fulfilling Lucian's wish of avenging his fallen love and unborn child. The two battled. Although Michael's power proved formidable, Viktor's centuries of battle experience proved decisive, and he began to choke Michael to death. A vengeful Selene then sliced a distracted Viktor's head in two with one stroke of his own sword.

Later, Viktor's body was retrieved by the Cleaners, an organization led by the original immortal, Alexander Corvinus, that was fully dedicated to cleaning up any indications of a supernatural struggle after the taxing Vampire-Lycan war. Corvinus extracted the key from beneath Viktor's flesh with the intention of destroying the artifact, only to later have it snatched by Markus after he confronted his father.

Later, Viktor's body is retrieved by the Cleaners, an organization dedicated to cleaning up after the Vampire-Lycan war led by the original immortal, Alexander Corvinus. Alexander extracts the key from beneath Viktor's flesh - only to later have it snatched by his son Marcus.

Viktor has all the powers and abilities of a Vampire, but due to being an Elder, he is much stronger than normal Vampires.

A dying Viktor hearing Marcus' offer to turn him into a vampire. 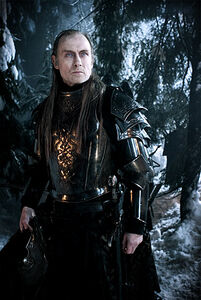 Viktor in the opening of Underworld: Evoltuion.

Viktor and the other Elders. 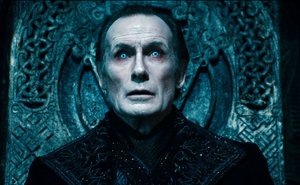 Viktor in Underworld: Rise of the Lycans. 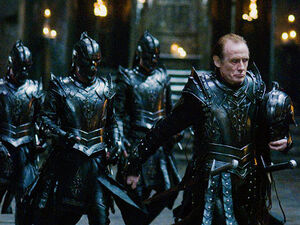 Viktor and his men.

Viktor being stabbed in the mouth by Lucian. 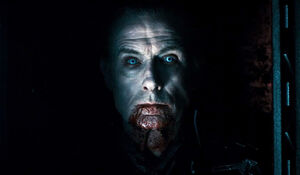 Viktor going into hibernation after his defeat. 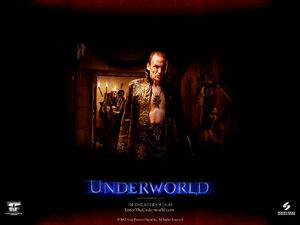 Poster of Viktor for Underworld.

Viktor after waking from his slumber.

Viktor hearing news of the scheme to merge Lycans with vampires.

Viktor and his men searching for Michael.

Viktor with Selene, after she discovers his true nature.

An enraged Viktor trying to kill Michael in battle.

Viktor's head is sliced in half with a sword. 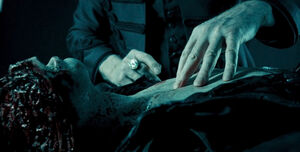 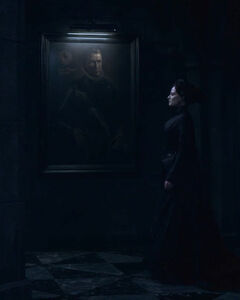