Sleeper Agent of the Illuminati

Restore equality and human rights to all augmented people.

Resist and end the oppression of transhumance everywhere.
Further the cause of ARC.

Viktor Marchenko is a character and the main antagonist of the dystopian sci-fi shooter Deus Ex: Mankind Divided. He is a high-ranking official of the Augmented Rights Coalition and leads a splinter-cell terrorist faction within the organization and has been responsible for multiple terrorist attacks across Europe including the Ruzica Station in Prague, Czech Republic. He's one of the primary target for Adam Jensen and Task Force 29.

Nothing is known about Viktor's life as of yet but he was most likely born in the Czech Republic and recieved large amounts of augmentations most likely from a tragic incident in the past. It is unknown if he was infected with the computer virus that started the Aug Incident though but did suffer from its aftermath. Viktor, like many others, was eventually forced into a ghetto and he now seeks revenge

In Mankind Divided, Viktor is the leader of a terrorist faction within ARC and is responsible for multiple terrorist attacks across Europe including the bombing the Ruzica Station which killed dozens of civilians. In the reveal trailer he's seen making a message to the world on how augmented people will not sit back and be killed off and will continue his insurrection until Jensen comes in and interrupts the message. In the E3 Trailer, he's seen at the end where he overlooks Jensen's escape next to a small team of ARC Insurgents. His actions have led to ARC being labeled a terrorist organization by many governments and for having Talos Rucker, ARC's Leader, being labeled as a terrorist despite Rucker's abhorrence for violence.

Viktor is immensly tall and is pyshically strong and well-built. He's very tall and buff having a brute-like appearance. Both arms are augmented and most most likely from a tragic incident in the past and his right eye is also patched up from an accident before. He wears all black clothing with military armor and gear all over him and a large cape as well.

Marchenko is an outspoken and unique member of ARC primarily for his radical views. He's become cold and ruthless in the bleak Post-Aug Incident world and has become a rather cold and vengeful individual. He's very smart and intelligent as he knows about previous revolutions that occured in the past. His violent and militaristic ideology and call for rebellion to save augmented people has caused him to be responsible for mutliple terrorist attacks all across Europe including one in Prague at the Ruzica Train Station. His goal to further the cause of ARC has led him to be at odds with Talos Rucker, ARC's Leader, because of the two opposing and conflicting beliefs.

"This should be your fight brother" 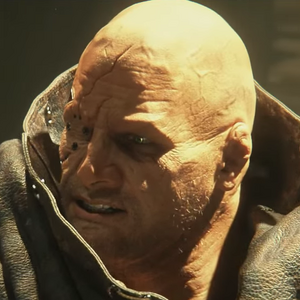 Viktor with a Linebacker G-87 MSGL

Viktor making a message to the world 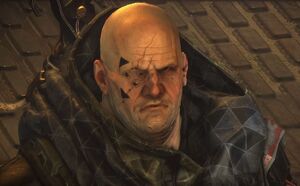 Marchenko watching Jensen get away 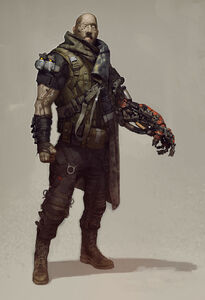 Retrieved from "https://villains.fandom.com/wiki/Viktor_Marchenko?oldid=3313339"
Community content is available under CC-BY-SA unless otherwise noted.